The Americans win the Battle of Assunpink Creek 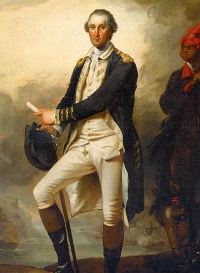 On this day in history, January 2, 1777, the Americans win the Battle of Assunpink Creek, otherwise known as the Second Battle of Trenton. This was the second victory for the Continental Army in a week, helping to revive the flagging spirits of the American revolutionaries.

On December 26, George Washington had crossed the Delaware River into New Jersey and staged a surprise attack against the Hessian garrison at Trenton, capturing nearly 1,000 soldiers. After the battle, Washington withdrew back across the river into Pennsylvania, anticipating a strong counterattack from the British.

General William Howe, the British Commander-in-Chief of North America was furious with the defeat at Trenton. He canceled Lieutenant General Charles Cornwallis' scheduled leave to Britain for the winter and ordered him to Princeton immediately. 8,000 troops converged on Princeton on January 2 and Cornwallis began marching them south toward Trenton, sending an advance guard ahead of the rest.

George Washington had faced a dilemma only a few days before. The enlistments of most of his men would expire on December 31st. He knew the whole war might be lost if the army were to dissolve now. He offered the soldiers $10 to stay on for another month and the vast majority decided to stay. Their money arrived from Congress on January 1st. 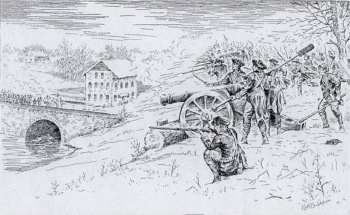 Washington's men crossed back over the Delaware on the 29th and took up positions south of Trenton on Assunpink Creek. He also sent another line under the command of French Brigadier-General Matthias Alexis Roche de Fermoy north to delay the British advance from Trenton. When the advance line met the oncoming British, they took cover behind trees and in ravines, greatly delaying Cornwallis for much of the day. General Fermoy, who had become drunk, went back to Trenton and Colonel Edward Hand took over the line.

The advance line was finally driven back to Assunpink Creek by twilight and the full British army began an attack on the bridge. Washington's men held back three assaults from the British, felling hundreds of British soldiers in the process, causing Cornwallis to hold a council to decide what to do. Cornwallis had already lost 365 men to the Battle of Assunpink Creek by this point, while the Americans lost only 100. Some of his officers wanted to attack immediately, while others wanted to wait until morning. Cornwallis ultimately decided to wait until morning, believing the Continentals were already defeated, worn out and had nowhere to go.

Washington took advantage of the break. In the middle of the night, he withdrew most of his troops in silence and sent them north to Princeton, leaving 500 soldiers at Assunpink Creek to keep fires burning to make it appear that the army was still there. When Cornwallis arose in the morning, to his horror, Washington's entire army was gone. They had marched to Princeton and taken over the 1,200 man garrison there, the third American victory in 9 days, forcing the British to withdraw from most of New Jersey and back to New Brunswick and New York City for the winter.