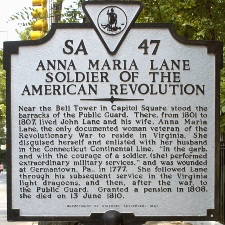 On this day in history, February 6, 1808, Anna Maria Lane receives a Revolutionary War veterans pension. Anna Maria is the only known Virginia woman who fought as a soldier in the Revolution. Scholars believe she was born in New Hampshire and that she became a "camp follower" when her husband, John Lane, joined the Continental Army's Connecticut Line in 1776. Camp followers were women who traveled with the army and did tasks such as cooking, laundering clothes and tending to the wounded.

John served under General Israel Putnam and fought at the battles of White Plains, Trenton, Princeton, Germantown and later in Georgia. Anna Maria was apparently with him the whole time. We do not know when Anna Maria first fought as a soldier, but the one thing that is known for certain is that she was dressed as a soldier and fought at the Battle of Germantown in 1777 during George Washington's attempt to retake Philadelphia from the British. Anna Maria was wounded in the leg during the battle and this made her lame for the rest of her life. Later in the war, John joined the Virginia Light Dragoons and fought in Georgia.

After the Revolution, John Lane took a job at the Virginia state arsenal at Point of Fork, Virginia. In 1801, he and Anna Maria moved to the capital of Richmond when he took a job with the public guard, which was the equivalent of the national guard today. The public guard in Richmond was responsible for the security of the capital city's public buildings.

Anna Maria volunteered as a nurse at the military hospital in Richmond where she met Dr. John Foushee. Dr. Foushee was so impressed with Anna Maria's work that he petitioned then governor (and future President) James Monroe to give Anna Maria a salary for her work at the hospital, which he agreed to. 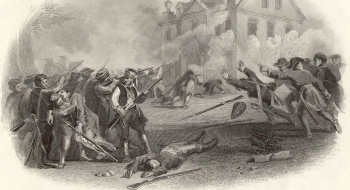 The Battle of Germantown by Christian Schussele

By 1804, John and Anna Maria were both aging and retired from work. They joined a group of other war veterans and petitioned the state to receive veterans' pensions. A letter dated January 28, 1808 from Governor William Cabell to the Virginia Speaker of the House recommends giving pensions to several veterans and he draws special attention to Anna Maria, saying she was "very infirm, having been disabled by a severe wound which she received while fighting as a common soldier, in one of our Revolutionary battles, from which she never has recovered, and perhaps never will recover."

The typical Virginia veteran received a pension of $40 a year at the time. The Virginia legislature paid John and several others $40 a year in the legislation passed on February 6, 1808, but it took the extraordinary measure of paying Anna Maria Lane $100 a year - two and a half times the typical soldiers' pension! Because of this extremely oversized salary, many historians speculate that Anna Maria must have done something truly extraordinary at the Battle of Germantown. Unfortunately, no one took the time to write down exactly what she did and the facts are lost to us today. Maybe she fought in hand to hand combat? Maybe she led a charge against the enemy? We will never know.

Anna Maria died in 1810. An historical marker was erected in her honor near the Capitol in Richmond in 1997.