The Continental Congress meets for the first time

On this day in history, September 5, 1774, the Continental Congress meets for the first time. The First Continental Congress met in response to Parliament's Coercive Acts, which were passed to punish the colonists for the Boston Tea Party. The Coercive Acts shut down the Massachusetts government and replaced it with a military dictatorship. It also shut down Boston harbor until the tea was paid for, made British officials immune from prosecution and required colonists to house British troops. 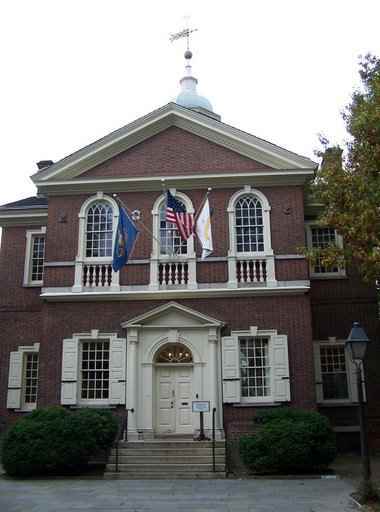 The Coercive Acts, or the Intolerable Acts, as the colonists called them, spread alarm across all the colonies, even though they were primarily aimed at Massachusetts. The other colonies realized that if Parliament would do this to Massachusetts, then none of them were safe from the same punitive measures. Colonists everywhere called for the election of representatives to attend a continent-wide congress to discuss a joint response to the Coercive Acts.

54 delegates convened at Carpenter's Hall in Philadelphia on September 5, 1774. The delegates had been chosen through various means in 12 colonies. The only colony not present was Georgia, which was more strongly Loyalist than the other colonies. Men such as George Washington, Samuel Adams, Patrick Henry, John Dickinson, Caesar Rodney and Christopher Gadsden debated the issues for 7 weeks.

Some, such as Patrick Henry, wanted to declare independence immediately. Others, such as Joseph Galloway of Pennsylvania, wanted to reconcile with the King. Galloway presented a "Plan of Union" that called for the creation of an American parliament with a royally appointed President, as a way of retaining both sides' interests. Galloway's plan was popular, but it was discarded when a copy of the "Suffolk Resolves" arrived. 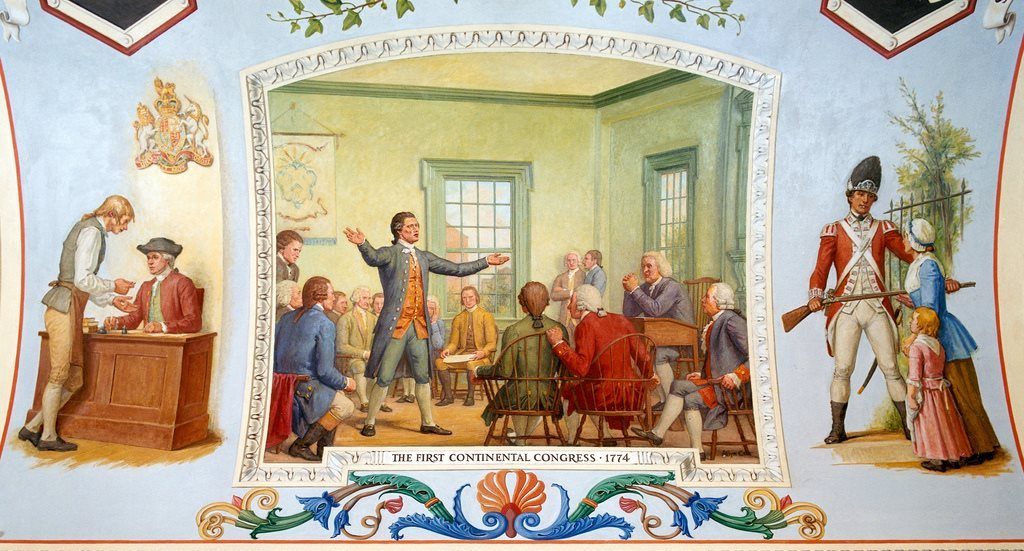 The Suffolk Resolves came from the county where Boston was located in Massachusetts. The Resolves contained strong language advocating a boycott of British goods, disobedience to the Coercive Acts, the resignation of anyone appointed under the Acts and the refusal to pay taxes until the Acts were repealed. The Suffolk Resolves also supported the creation of a separate government in Massachusetts until the Coercive Acts were repealed and encouraged all the colonies to raise troops in case of all out war.

The Suffolk Resolves drastically changed the course of the Continental Congress, which publicly endorsed them. By the time the Congress closed on October 26, Congress had written a letter detailing its grievances and requesting the King to address them. It also enacted a continent-wide boycott of British goods to begin on December 1 and encouraged each colony to set up its own enforcement regime to enforce compliance with the boycott.

The Congress took the advice of the Suffolk Resolves and encouraged each colony to begin raising its militia and securing supplies and ammunition in the case that physical resistance became necessary. It also voted to send letters to other colonies such as Quebec, Nova Scotia, East and West Florida and Prince Edward Island, encouraging them to join in the resistance, although records indicate such a letter was only ever sent to Quebec.