Daniel Boone is captured by a British/Shawnee war party 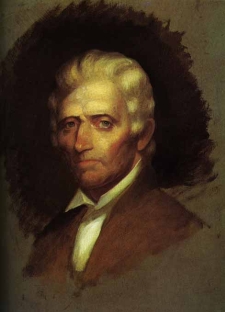 Daniel Boone by Chester Harding, the only portrait of Boone from real life, made when he was 84.

On this day in history, February 8, 1778, Daniel Boone is captured by a British/Shawnee war party. Boone had forged a trail across the Cumberland Gap several years earlier and settled Fort Boonesborough, one of only three settlements at the time in what is now Kentucky.

In the winter of 1777-78, Boonesborough ran out of its vital salt supply. No supplies would come until spring, so the only way to get salt was by boiling water from a salt spring. The settlers decided they had to do this, in spite of the fact that sending out a large party of men to the nearest spring would leave the fort vulnerable to attack.

30 men set out for Blue Licks, which was about 60 miles away, where they gathered salt for several weeks. On February 8, Boone was out hunting when he was captured by a group of Indians. He discovered that over 100 Shawnee were on their way to attack Boonesborough, accompanied by two aides to the British Governor of Detroit. This was a British backed attack.

Boone knew the fort couldn't stand, so he played nice and told them that if his men were allowed to surrender peacefully and accompany them back to Detroit, in the spring Boone would lead an expedition back to Boonesborough where he would persuade the settlers to declare allegiance to King George. Chief Blackfish, the Shawnee leader, agreed to this, not knowing that Boone was lying and trying to save the lives of his men and those back at the fort. 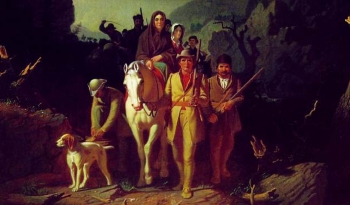 Boone persuaded the men to give themselves up, convincing them it was the only way to save their families. The Indians did not harm them, but did force them to "run the gauntlet," a form of punishment in which the prisoners were made to run through two lines of Indians who would strike them as hard as they could. The prisoners stayed with the Indians for months, pretending to be friendly, but hoping to escape all along. Boone was even adopted into the tribe as a son of Chief Blackfish.

Back at the fort, word arrived that the men had been captured. After several months of hearing nothing, they were given up for dead. Rebecca Boone, Daniel's wife, and her children moved back to North Carolina with many of the others. Meanwhile, one of the other captured men escaped and returned to the fort. He convinced them that Boone was collaborating with the British.

In June, the Shawnee decided to take revenge on Boonesborough for a failed attempt to capture Donelly's Fort. Boone escaped to warn them, traveling 160 miles across the wilderness in 4 days. He was held in suspicion at first because the settlers believed he had colluded with the British, but he was able to convince them a war party was coming.

The Great Siege of Boonesborough began on September 8 and lasted 12 days. Though the Indians made numerous attempts, they were unable to penetrate its defenses and finally gave up the attack. Daniel Boone was charged with aiding the British for his ruse, but after a court-martial examined the evidence, he was commended for his handling of the crisis, promoted to major in the Virginia militia and soon reunited with his family in North Carolina.