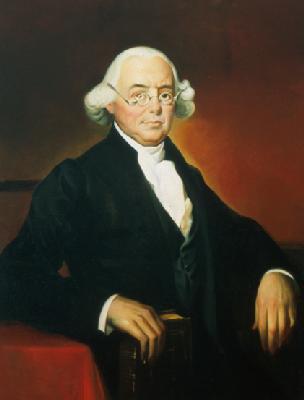 James Wilson was a lawyer, signer of the Declaration of Independence and Founding Father from Pennsylvania. In this address he made to a Grand Jury, James Wilson addresses issues of crime and punishment. Wilson does not directly speak about the death penalty, however, he discusses extensively that he believes the most extreme forms of punishment for crime are unproductive. He says judges and juries will be reluctant to hand out serious punishments because of human nature and that this will encourage criminals to commit more crime, knowing that they will get off easy. Instead, James Wilson recommends mild punishments that judges and juries will be more likely to hand out. This, he reasons, will cause more obedience to the law because criminals will know they will be punished if caught committing a crime.

James Wilson to a Grand Jury

Gentlemen of the grand jury, to prevent crimes is the noblest end and aim of criminal jurisprudence. To punish them is one of the means necessary for the accomplishment of this noble end and aim. The impunity of an offender encourages him to repeat his offences. The witnesses of his impunity are tempted to become his disciples in his guilt. These considerations form the strongest--some view them as the sole argument for the infliction of punishments by human laws.

There are, in punishments, three qualities, which render them the fit preventives of crimes. The first is their moderation. The second is their speediness. The third is their certainty.

We are told by some writers, that the number of crimes is unquestionably diminished by the severity of punishments. If we inspect the greatest part of the criminal codes; their unwieldy bulk and their ensanguined hue will force us to acknowledge, that this opinion may plead, in its favour, a very high antiquity, and a very extensive reception. On accurate and unbiassed examination, however, it will appear to be an opinion unfounded and pernicious, inconsistent with the principles of our nature, and, by a necessary consequence, with those of wise and good government.

So far as any sentiment of generous sympathy is suffered, by a merciless code, to remain among the citizens, their abhorrence of crimes is, by the barbarous exhibitions of human agony, sunk in their commiseration of criminals. These barbarous exhibitions are productive of another bad effect--a latent and gradual, but a powerful, because a natural, aversion to the laws. Can laws, which are a natural and a just object of aversion, receive a cheerful obedience, or secure a regular and uniform execution? The expectation is forbidden by some of the strongest principles in the human frame. Such laws, while they excite the compassion of society for those who suffer, rouse its indignation against those who are active in the steps preparatory to their sufferings.

We may easily conjecture the result of those combined emotions, operating vigorously in concert. The criminal will, probably, be dismissed without prosecution by those whom he has injured. If prosecuted and tried, the jury will probably find, or think they find, some decent ground, on which they may be justified, or at least excused, in giving a verdict of acquittal. If convicted, the judges will, with avidity, receive and support every, the nicest exception to the proceedings against him; and, if all other things should fail, will have recourse to the last expedient within their reach for exempting him from rigorous punishment--that of recommending him to the mercy of the pardoning power. In this manner, the acerbity of punishment deadens the execution of the law.

The criminal, pardoned, repeats the crime, under the expectation that the impunity also will be repeated. The habits of vice and depravity are gradually formed within him. Those habits acquire, by exercise, continued accessions of strength and inveteracy. In the progress of his career, he is led to engage in some desperate attempt. From one desperate attempt he boldly proceeds to another, till, at last, he necessarily becomes the victim of that preposterous rigour, which repeated impunity had taught him to despise, because it had persuaded him that he might always escape.

When, on the other hand, punishments are moderate and mild, every one will, from a sense of interest and of duty, take his proper part in detecting, in exposing, in trying, and in passing sentence on crimes. The consequence will be, that criminals will seldom elude the vigilance, or baffle the energy, of publick justice.

True it is, that, on some emergencies, excesses of a temporary nature may receive a sudden check from rigorous penalties: but their continuance and their frequency introduce and diffuse a hardened insensibility among the citizens; and this insensibility, in its turn, gives occasion or pretence to the farther extension and multiplication of those penalties. Thus one degree of severity opens and smooths the way for another, till, at length, under the specious appearance of necessary justice, a system of cruelty is established by law.

Such a system is calculated to eradicate all the manly sentiments of the soul, and to substitute, in their place, dispositions of the most depraved and degrading kind. It is the parent of pusillanimity. A nation broke to cruel punishments becomes dastardly and contemptible. For, in nations, as well as individuals, cruelty is always attended by cowardice. It is the parent of slavery. In every government, we find the genius of freedom depressed in proportion to the sanguinary spirit of the laws. It is hostile to the prosperity of nations, as well as to the dignity and virtue of men.