There are a number of Revolutionary War attractions you can visit today in Massachusetts. Tourism of Massachusetts attractions might take you to John Adams' birthplace in Quincy, Buckman Tavern in Lexington, where the militia met on the day the war began, Lexington Green, where the opening shots of the American Revolution were fired, Abigail Adams' birthplace, the home of General Benjamin Lincoln, Major General in the Continental Army or the home of John Hancock, Governor, President of the Continental Congress and signer of the Declaration of Independence.

Lexington Green, where the opening shots of the American Revolution were fired

Robert Treat Paine House, home of the signer of the Declaration of Independence

Hancock-Clarke House, site where John Hancock and Samuel Adams were staying when Paul Revere warned them that the British were coming

any other Massachusetts tourism attractions related to the Revolutionary War.

*This page is only for sites outside of Boston. Go to this page to add your story if the site is in Boston. 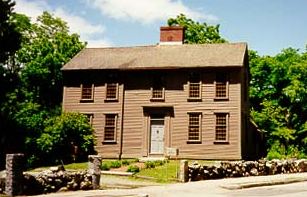 Have a great memory from a Revolutionary War site in Massachusetts?

Did you see or learn something interesting about the Revolutionary War at a site in historic Massachusetts? Tourism in Massachusetts is fun... so why not share your trip with the world? It's free and easy to do. There is no registration required and there is no other obligation on your part.