On this day in history, March 3, 1779, patriots lose the Battle of Brier Creek. British Lieutenant Colonel Archibald Campbell had captured Augusta, Georgia in January, 1778. Gathering American troops across the Savannah River made Campbell nervous, however, and he abandoned Augusta after only three weeks to return to the coast. Archibald was hoping Tory leader John Boyd would join him, but on the march, he learned Boyd was killed and his army of Loyalists routed at the Battle of Kettle Creek.

North Carolina General John Ashe followed Archibald to the bridge over Brier Creek at its confluence with the Savannah River. Archibald had destroyed the bridge and continued south to Ebenezer where he turned his 900 troops over to Lieutenant Colonel Mark Prevost and went on to Savannah. 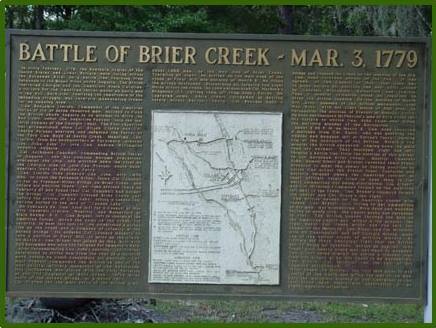 General Ashe, meanwhile, was camped out in the fork between Brier Creek and the Savannah. Military experts have criticized him for this because it was too easy to be trapped in the fork with no way of escape. Ashe left on February 28 to meet with other generals in South Carolina for orders, leaving command to his subordinates.

Lt. Col. Prevost then devised an attack plan. He would leave a force south of the creek to act as a diversion and march the main body of his troops up the east side of the river during the night. They would cross at Paris' Mill Bridge upriver from the patriots, surprise them and trap them in the fork. Prevost's plan worked like a charm. It has been called one of the smartest movements of the entire Revolution. 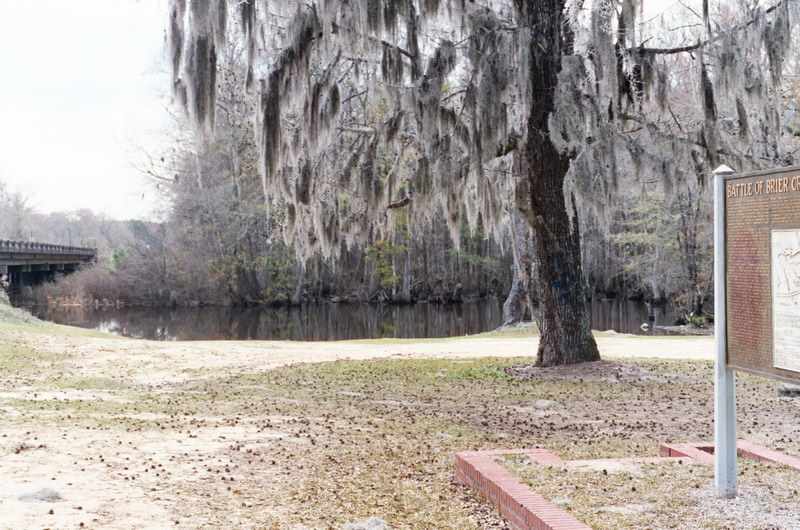 Site of the Battle of Brier Creek at modern day Brannen's Bridge. Brier Creek is in the background under the bridge and the historical marker is in the foreground at the right.

On March 2, he arrived at Paris' Mill Bridge to find it destroyed. He knocked down Francis Paris' home and mill and used the wood to rebuild the bridge. Some of his cavalry skirmished with a small contingent of Ashe's men on the opposite side of the river, but they did not get back to camp in time to warn them.

General Ashe returned to camp on March 2 as well, not knowing Prevost and 1,500 men were crossing the river a few miles upstream. Ashe had been instructed to wait for the arrival of Generals Lincoln, Williamson and Rutherford. The plan was to destroy the British and drive them back to the coast in an effort to bring the southern occupation to a quick end.

Instead, on March 3, a rider came into Ashe's camp frantically warning that the British were approaching. The Americans scrambled to get ready, but the British arrived minutes later and quickly overtook the American defenses. Withering cannon and gunfire decimated the Americans. Many green militia members fled into the swamps.

In the end, the Battle of Brier Creek was a disaster. At least 150 Americans were killed and over 200 captured, many drowning in the swamps trying to escape. The British suffered only 5 dead and 11 wounded. The battle destroyed American hopes to quickly end the war in the south. General Ashe was formally charged with cowardice, but exonerated in a court martial. General William Moultrie later wrote that the defeat at the Battle of Brier Creek unnecessarily extended the war by an entire year.