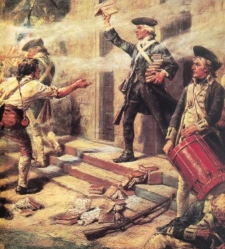 On this day in history, January 25, 1780, the Courthouse and Presbyterian Church are burned in Elizabethtown, New Jersey by the British. Due to its proximity to New York City and Staten Island, the city was the site of numerous skirmishes and events of significance during the war. Elizabethtown sat just across Newark Bay from Staten Island and is just south of Newark, New Jersey. At the time of the Revolution, Elizabethtown was the largest city in New Jersey and its county, Union County, the largest county.

Staten Island was a primary base of operation for the British army for the entire American Revolution. Many British missions originated from here and it was a primary target for rebel activity. On January 14 and 15, 1780, New Jersey militia had conducted a raid in Staten Island that went bad because the soldiers, who had been instructed to confiscate livestock and military supplies, went on a wild scavenging mission and stole anything of value they could get their hands on. Sixty soldiers from Elizabethtown were captured during the raid.

In response, the British sent a raiding mission into Elizabethtown on January 25th. During the raid, the Presbyterian Church and the Courthouse were destroyed, as well as several private homes. You may wonder why a church was a target for the British. This particular church was pastored by the Rev. James Caldwell, known for his incendiary sermons against the British. 36 officers and numerous non-commissioned officers and privates in the Continental Army came from this church.

Caldwell is the pastor known for yelling out, "Give 'em Watts, boys! Give 'em Watts!," during the Battle of Springfield, in which the soldiers ran out of wadding for their guns. In response, he gave them a load of hymnals by the famous songwriter Isaac Watts and tore out the pages for wadding. He also served as a chaplain in the Continental Army. Caldwell was so hated by the British that his parsonage was burned down in a raid the year before. His wife, Hannah was killed, some say assassinated, only two weeks before at the Battle of Connecticut Farms while she sat in her house. Caldwell himself was assassinated by the end of 1781.

After the raid in Elizabethtown, the British soldiers went on to Newark, New Jersey where they burned down another patriot filled Presbyterian church, pastored by the Rev. Alexander McWhorter, and McWhorter's school, Newark Academy.