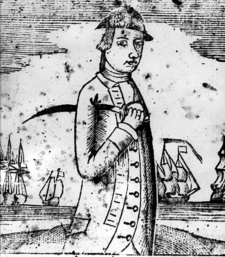 On this day in history, November 29, 1775, the USS Lee captures the British brigantine Nancy. George Washington and the Continental Army were besieging British held Boston at the time. The British troops were trapped in the city and the only way to receive food and supplies was by sea. Washington wanted to harass and capture as many ships bringing supplies to the troops in Boston as possible, so he formed a small squadron of ships, outfitted at his own expense, for the task.

Captain John Manley was given command of a schooner named the USS Lee, after General Charles Lee. The schooner was chartered from Thomas Stevens of Marblehead, Massachusetts and was previously called the Two Brothers. Captain Manley set out from Marblehead on October 28. He captured a small British sloop called the Polly, carrying turnips to the soldiers in Boston on November 27th, but on the 29th, he ran into the brigantine Nancy, a massive 250 ton British ship bringing supplies to Boston. Unknown to Captain Manley and the crew of the USS Lee, the ship was carrying tons of ammunition and weapons.

After capturing the Polly, Manley searched the waters off of Boston. When the Nancy saw the Lee, it was mistaken for a British pilot boat which would lead them into Boston. The Nancy then gave a series of signal flags, alerting the Lee that her intentions had not yet been discovered. Captain Manley sent a boat of men to the Nancy with their arms concealed. As soon as they boarded the ship, they pulled their weapons on the crew and the ship was surrendered without a fight.

The Nancy turned out to be one of the most valuable captures of the American Revolution. It contained 2,000 muskets, 8,000 fuses, 31 tons of musket balls, 3,000 solid shot for 12-pounders (cannon balls), one 13 inch cannon, 100,000 flints and other types of ammunition and supplies.

The Nancy was sailed into Beverly, Massachusetts, where the supplies were loaded onto wagons and hauled to Cambridge, George Washington's headquarters outside Boston. The arrival of the supplies caused an eruption of excitement through the Continental Army camp and throughout the northeast because their arms and supplies were extremely limited before the arrival of the captured munitions. The joy was so great that Colonel Stephen Moylan wrote of General Israel Putnam celebrating as he sat on top of the newly acquired cannon with a bottle of rum in his hand to christen it.

The USS Lee was captained by John Manley for one more mission, on which the British ship Concord was captured, carrying food and coal to Boston. Manley was then promoted to captaining the faster ship USS Hancock. The USS Lee went on in the service of the Navy for two more years, captained by various men and capturing another 15 ships before it was returned to its owner.

Captain John Manley went on to command Washington's schooner fleet in the northeast, sailing under the Washington's Cruisers flag, a flag with a pine tree on it, created just for the fleet. He received the third naval commission from Congress as a captain when Congress took on the duties of creating a navy. Manley captured ten British ships during the war and helped in the capture of five others. He was also captured three times and spent more than two years in British prisons during the war. Though little known today, John Manley is regarded as one of the first naval heroes of American history for his many spectacular and heroic deeds.