The Virginia Plan was presented to the Constitutional Convention by Edmund Randolph on May 29, 1787. It was mostly written by James Madison in Philadelphia while he waited for enough delegates to assemble. The plan went beyond the Convention's instructions to revise the Articles of Confederation. Madison knew revising the Articles was not going to work. He believed a completely new government would have to be constructed. 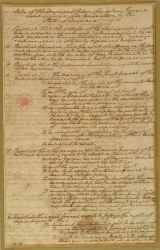 The Virginia Plan contained the ideas of a three part government consisting of executive, legislative and judicial branches, with a two house legislature. Madison's plan was submitted as soon as the Convention met and it guided the discussion from then on.

The Virginia Plan was submitted to the Constitutional Convention by Edmund Randolph, another delegate from Virginia. The Virginia Plan is also known as the Randolph Plan or the Large State plan. The picture above is James Madison's personal copy of the Virginia Plan.

1. Resolved that the Articles of Confederation ought to be so corrected & enlarged as to accomplish the objects proposed by their institution; namely, "common defence, security of liberty and general welfare."

2. Resd therefore that the rights of suffrage in the National Legislature ought to be proportioned to the Quotas of contribution, or to the number of free inhabitants, as the one or the other rule may seem best in different cases.

3. Resd that the National Legislature ought to consist of two branches.

4. Resd that the members of the first branch of the National Legislature ought to be elected by the people of the several States every _______ for the term of ______ ; to be of the age of years at least, to receive liberal stipends by which they may be compensated for the devotion of their time to public service; to be ineligible to any office established by a particular State, or under the authority of the United States, except those peculiarly belonging to the functions of the first branch, during the term of service, and for the space of after its expiration; to be incapable of reelection for the space of after the expiration of their term of service, and to be subject to recall.

5. Resold that the members of the second branch of the National Legislature ought to be elected by those of the first, out of a proper number of persons nominated by the individual Legislatures, to be of the age of _____ years at least; to hold their offices for a term sufficient to ensure their independency; to receive liberal stipends, by which they may be compensated for the devotion of their time to public service; and to be ineligible to any office established by a particular State, or under the authority of the United States, except those peculiarly belonging to the functions of the second branch, during the term of service, and for the space of _____ after the expiration thereof.

6. Resolved that each branch ought to possess the right of originating Acts; that the National Legislature ought to be impowered to enjoy the Legislative Rights vested in Congress bar the Confederation & moreover to legislate in all cases to which the separate States are incompetent, or in which the harmony of the United States may be interrupted by the exercise of individual Legislation; to negative all laws passed by the several States, contravening in the opinion of the National Legislature the articles of Union; and to call forth the force of the Union agst any member of the Union failing to fulfill its duty under the articles thereof.

7. Resd that a National Executive be instituted; to be chosen by the National Legislature for the term of years, to receive punctually at stated times, a fixed compensation for the services rendered, in which no increase or diminution shall be made so as to affect the Magistracy, existing at the time of increase or diminution, and to be ineligible a second time; and that besides a general authority to execute the National laws, it ought to enjoy the Executive rights vested in Congress by the Confederation.

9. Resd that a National Judiciary be established to consist of one or more supreme tribunals, and of inferior tribunals to be chosen by the National Legislature, to hold their offices during good behaviour; and to receive punctually at stated times fixed compensation for their services, in which no increase or diminution shall be made so as to affect the persons actually in office at the time of such increase or diminution. that the jurisdiction of the inferior tribunals shall be to hear & determine in the first instance, and of the supreme tribunal to hear and determine in the dernier resort, all piracies & felonies on the high seas, captures from an enemy; cases in which foreigners or citizens of other States applying to such jurisdictions may be interested, or which respect the collection of the National revenue; impeachments of any National officers, and questions which may involve the national peace and harmony.

10. Resolvd that provision ought to be made for the admission of States lawfully arising within the limits of the United States, whether from a voluntary junction of Government & Territory on otherwise, with the consent of a number of voices in the National legislature less than the whole.

11. Resd that a Republican Government & the territory of each State, except in the instance of a voluntary junction of Government & territory, ought to be guarantied by the United States to each State

12. Resd that provision ought to be made for the continuance of Congress and their authorities and privileges, until a given day after the reform of the articles of Union shall be adopted, and for the completion of all their engagements.

13. Resd that provision ought to be made for the amendment of the Articles of Union whensoever it shall seem necessary, and that the assent of the National Legislature ought not to be required thereto.

14. Resd that the Legislative Executive & Judiciary powers within the several States ought to be bound by oath to support the articles of Union.

15. Resd that the amendments which shall be offered to the Confederation, by the Convention ought at a proper time, or times, after the approbation of Congress to be submitted to an assembly or assemblies of Representatives, recommended by the several Legislatures to be expressly chosen by the people, to consider & decide thereon.