Caesar I - reply to Cato I
On the Language of Distrust

The Citizens of the State of New-York have received yesterday, from Cato (an ally of Pompey, no doubt) an introductory discourse on the appearance of the New System for the Government of the United States: this, we are told, will be followed by such observations, on the constitution proposed to the Union, “as will promote our welfare and be justified by reason and truth.” There is, in this preparatory lecture, little that is necessary to be dwelt on just now; and if Cato had not possessed his future investigations, in such terms as wore a questionable shape, they should have passed unheeded. 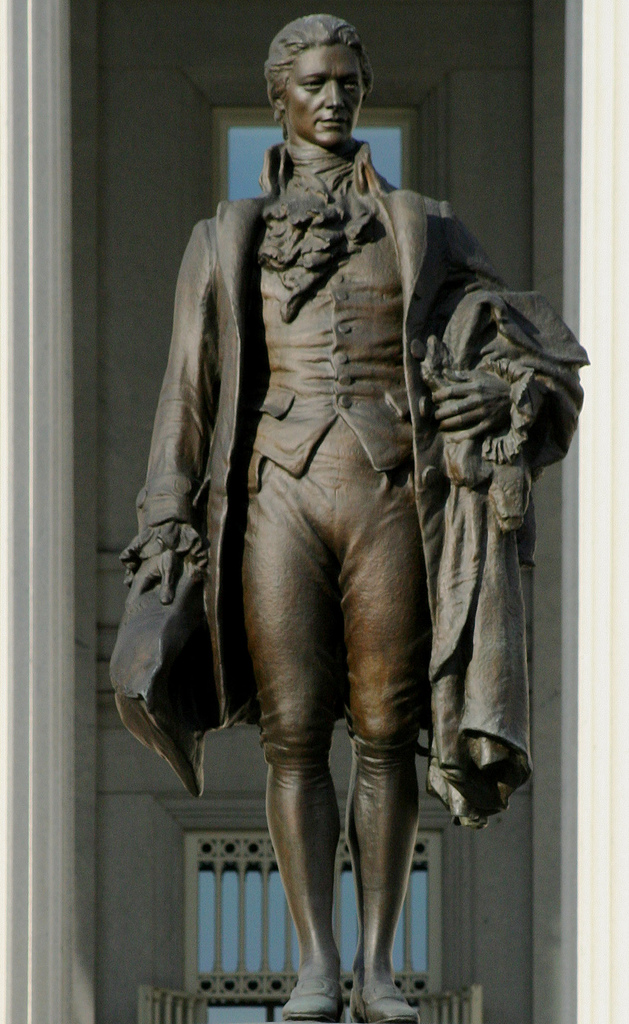 Caesar is thought to have been Alexander Hamilton

Cato tells us that he will not directly engage as an advocate, for this new form of Government–or as an opponent. Here Cato, without any dispute, acts prudently. It will be wise in him to rest a while; since he has given a preface, which, with small address, can easily be made to work on either side. When the sentiments of the Confederated States come to be generally known, it will be time enough to proceed–Cato will then start fair. A little caution, however, he thinks necessary to be given in the mean time. “Do not” says this prudent Censor, in addressing the Citizens, “because you admit that something must be done, adopt any thing.” What, in the name of common sense, does this injunction import? I appeal to men of understanding, whether it is not obviously the language of distrust, calculated, as far as such a thing can influence, to prejudice the public opinion against the New Constitution; and, in effect, by a periphrastic mode of speech, recommending the rejection of it?-“Teach the Members of the Convention (Cato very modestly goes on) that you are capable of a supervision of their conduct; the same medium that gave you this system, if it is erroneous, while the door is now open, can make amendments, or give you another.” 0 excellent thought, and happily advised!

Beclamorous, my friends–he discontented–assert your prerogative–for ever assert the power and Majesty of the People!!!–I am not willing to suspect any man’s intentions, when they aim at giving information; hut when they come abroad, couched in such magisterial terms, I own feel some indignation. If this demagogue had talents to throw light on the subject of Legislation, why did he not offer them when the Convention was in session? If they had been judged useful, no doubt they would have been attended to. But is this now a time for such insinuations? Has not the wisdom of America been drawn, as it were, into a focus, and the proferred Constitution sent forth with an unanimity, that is unequalled in ancient or modern story? And shall we now wrangle and find fault with that excellent Whole, because, perhaps, some of its parts might have been more perfect?–There is neither virtue nor patriotism in such conduct. Besides, how can Cato say, &quptThat the door is now open to receive any amendments, or to give us another Constitution, if required.” I believe he has advanced this without proper authority. I am inclined to believe that the door of recommendation is shut, and cannot be opened by the same men; that the Convention, in one word, is dissolved: if so, we must reject, IN TOTO, or vice versa; just take it as it is; and be thankful. I deny the similarity betwixt the present Constitution and that of the United Netherlands.–Cato would here draw a very melancholy picture, but it won’t apply. In my humble opinion, it has a much greater affinity with a Government, which, in all human probability, will remain when the History of the Seven Provinces shall be forgotten.–Cato tells us (what all America knows by this time) that the New Constitution comes sanctioned with the approbation of General Washington; and, though he appears to have some reverence for that great patriot chief, yet he very sagaciously observes, that the BEST AND WISEST MAN MAY ERR; and thence asserts, that every man in politics, as well as in religion, ought to judge for himself. This paragraph needs no comment, and, for that reason, I shall not touch it; but, with all deference to Cato’s penetration, I would recommend to him, instead of entering into fruit-less discussion of what has come from so many clear heads, and good hearts, to join his Fellow Citizens, and endeavour to reconcile this excellent Constitution to the weak, the suspicious, and the interested, who will he chiefly opposed to it; that we may enjoy the blessings of it as soon as possible. I would also advise him to give his vote (as he will probably be one of the Electors) to the American Fabius: it will be more healthy for this country, and this state, that he should be induced to accept of the Presidency of the New Government, than that he should be solicited again to accept of the command of an army.

Cato, it appears, intends to adventure on perilous ground; it will therefore become him to be cautious on what terms he takes the field. “He advises us to attach ourselves to measures, and not to men.” In this instance he advises well; and I heartily recommend to himself, not to forget the force of that important admonition: for Cato, in his future marches, will very probably be followed by CAESAR .

Return to Main Debate on the Constitution Page