Founding Fathers Quote of the Week 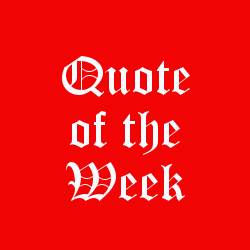 Have you ever heard a presenter or teacher rattle off quotes right off the top of their head?  Did you ever wish you could do that?

Those teachers likely have read that quote so many times that it's "in there."

You can do that too.

Here's a LINK to a video on how to memorize 10X faster.  Check it out.

"If we can prevent the government from wasting the labors of the people, under the pretence of taking care of them, they must become happy." - Thomas Jefferson, Letter to Thomas Cooper, November 29, 1802

"And can the liberties of a nation be thought secure when we have removed their only firm basis, a conviction in the minds of the people that these liberties are the gift of God? That they are not to be violated but with his wrath? Indeed I tremble for my country when I reflect that God is just: that his justice cannot sleep for ever." - Thomas Jefferson - Notes on the State of Virginia, Query 18, 1781

"Here is my Creed. I believe in one God, the Creator of the Universe. That He governs it by His Providence. That He ought to be worshipped. That the most acceptable service we render to Him is in doing good to His other Children. That the soul of Man is immortal, and will be treated with Justice in another Life respecting its conduct in this. These I take to be the fundamental points in all sound Religion, and I regard them as you do in whatever Sect I meet with them. As to Jesus of Nazareth, my Opinion of whom you particularly desire, I think the System of Morals and his Religion, as he left them to us, is the best the World ever saw, or is likely to see." - Benjamin Franklin - Letter to Ezra Stiles, President of Yale University, March 9, 1790

"To stand well in the estimation of one's country is a happiness that no rational creature can be insensible of." - George Washington

Among the natural rights of the colonists are these: First a right to life, secondly to liberty, and thirdly to property; together with the right to defend them in the best manner they can.  Samuel Adams

"If Virtue and Knowledge are diffused among the People, they will never be enslav'd. This will be their great Security." Samuel Adams

If a nation expects to be ignorant and free, in a state of civilization, it expects what never was and never will be.  Thomas Jefferson

"I know no safe depository of the ultimate powers of society but the people themselves; and if we think them not enlightened enough to exercise their control with a wholesome discretion, the remedy is not to take it from them, but to inform their discretion by education."  Thomas Jefferson

“If ye love wealth better than liberty, the tranquility of servitude better than the animating contest of freedom, go home from us in peace. We ask not your counsels or arms. Crouch down and lick the hands which feed you. May your chains set lightly upon you, and may posterity forget that ye were our countrymen.”  Samuel Adams

We hold these truths to be self-evident, that all men are created equal, that they are endowed by their Creator with certain unalienable Rights, that among these are Life, Liberty and the pursuit of Happiness. — That to secure these rights, Governments are instituted among Men, deriving their just powers from the consent of the governed...