On March 16, 1776, the Continental Congress, led by John Hancock issued a proclamation calling for a day of fasting and prayer. 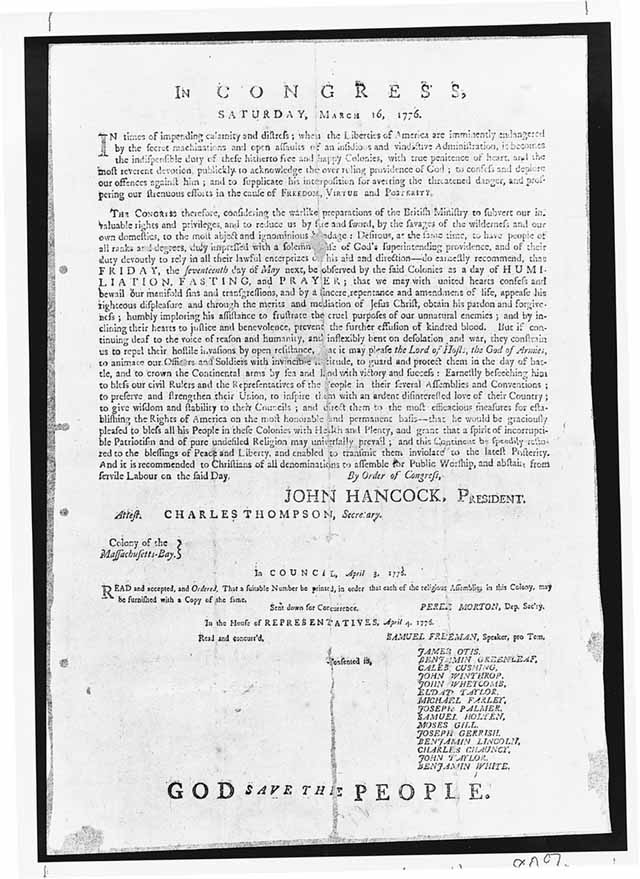 IN times of impending calamity and distress; when the Liberties of America are imminently endangered by the secret machinations and open assaults of an insidious and vindictive Administration, it becomes the indispensible duty of these hitherto free and happy Colonies, with true penitence of heart, and the most reverent devotion, publickly to acknowledge the over ruling providence of God; to confess and deplore our offences against him; and to supplicate his interposition for averting the threatened danger, and prospering our strenuous efforts in the cause of Freedom, Virtue and Posterity.

The Congress therefore, considering the warlike preparations of the British Ministry to subvert our invaluable rights and privileges, and to reduce us by fire and sword, by the savages of the wilderness and our own domestics, to the most abject and ignominious bandage: Desirous, at the same time, to have people of all ranks and degrees, duly impressed with a solemn of God's superintending
providence, and of their duty devoutly to rely in all their lawful enterprizes of his aid and direction — do earnestly recommend, that FRIDAY, the seventeenth day of May next, be observed by the said Colonies as a day of HUMILIATION, FASTING, and PRAYER; that we may with united hearts confess and bewail our manifold sins and transgressions, and by a sincere, repentance and amendment of life, appease his righteous displeasure and through the merits and mediation of Jesus Christ, obtain his pardon and forgiveness; humbly imploring his assistance to frustrate the cruel purposes of our unnatural enemies; and by inclining their hearts to justice and benevolence, prevent the further effusion of kindred blood. But if continuing deaf to the voice of reason and humanity, and inflexibly bent on desolation and war, they constrain us to repel their hostile invasions by open resistance, it may please the Lord of Hosts, the God of Armies, to animate our Officers and Soldiers with invincible to guard and protect them in the day of battle, and to crown the Continental arms by sea and land with victory and success: Earnestly beseeching him to bless our civil Rulers and the  epresentatives of the People in their several Assemblies and Conventions; to preserve and strengthen their Union, to inspire them with an ardent disinterested love of their Country; to give wisdom and stability to their Councils; and direct them to the most efficacious measures for establishing the Rights of America on the most honorable and permanent basis—that he would be graciously pleased to bless all his People in these Colonies with Health and Plenty, and grant that a spirit of incorruptible Patriotism and of pure undefiled Religion may universally prevail; and this Continent be speedily restored to the blessings of Peace and Liberty, and enabled to transmit them inviolate to the latest Posterity. And it is recommended to Christians of all denominations to assemble for Public Worship, and abstain
from servile Labour on the said Day.

In COUNCIL, April 3, 1776.
READ and accepted, and Ordered, That a suitable Number be printed, in order that each of the religious Assemblies, in this Colony, may be furnished with a Copy of the same.