William Paca was the descendant of a wealthy planter on the east shore of Maryland. He was born at Wye Hall, his paternal residence, in the year 1740. His early moral and intellectual training was carefully attended to, and at a proper age he was placed in the Philadelphia College, whence he graduated, after a course of arduous and profitable study, with great credit to himself. He then commenced the study of the law with Mr. Hammond and Mr. Hall, of Annapolis, and Samuel Chase, his subsequent Congressional colleague, was a fellow student. 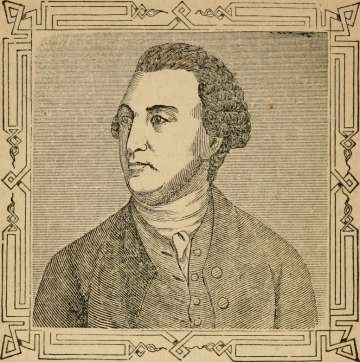 Mr. Paca, was admitted to the bar at the age of twenty, and the next year (1761), he was chosen a member of the Provincial Assembly. When the Stamp Act, in 1765, aroused the people of the colonies to their common danger, Mr. Paca, with Mr. Chase and Mr. Carroll, warmly opposed its operation. And every succeeding measure of the British government, asserting its right to "tax the Americans without their consent, was fearlessly condemned by him, and thus he soon obtained the disapprobation of the royal governor of the Province, and of those who adhered to the king and parliament. Like Mr Chase, he became very popular with the people by his patriotic conduct.

He approved of the proposition for a General Congress in 1774, and he zealously promoted the meeting of the people in county conventions to express their sentiments upon this point. He was appointed by a State Convention of Maryland, one of its five representatives in the Continental Congress, who were instructed to "agree to all measures which might be deemed necessary to obtain a redress of American grievances." Mr. Paca was re-elected in 1775, and continued a member of Congress until 1778, when he was appointed Chief Justice of the Supreme Court of his state.

Like Mr. Chase, Mr. Paca was much embarrassed in Congress by the opposition of his constituents to independence, and their loyal adherence to the British Crown, as manifested in their instructions, frequently repeated in the early part of 1776.1 Even as late as the middle of May, they passed a resolution prohibiting their delegates from voting for independence; but on the twenty-eighth of the same month a remarkable change in their opinions took place, and they ceased praying for the king and royal family! This was a sort of half wheel, and toward the latter part of June the convention finished its evolutions by a "right about face" and withdrew their restrictions upon the votes of their delegates. Thus relieved, Mr. Paca and his associates continued their efforts to effect a declaration of independence with more zeal than ever, and recorded their votes for the severance of the political bond of union with Britain, on the fourth of July following. On the second of August, they fearlessly affixed their signatures to the parchment.

About the beginning of 1778, Mr. Paca was appointed Chief Justice of the State of Maryland. He performed the duties with great ability and fidelity until 1782, when he was elected President or Governor of the State, under the old Articles of Confederation. He held the executive office one year, and then retired to private life.

In 1788, he was a member of the convention of Maryland, called to act upon the ratification of the Federal Constitution. He was a firm advocate there for its ratification, which event took place in November. After the New Constitution had gone into effect, and offices under it were to be filled, President Washington nominated him Judge for the district of Maryland.2

This office he held until the period of his death, which was in the year 1799, when he was in the sixtieth year of his age. He was a pure and active patriot, a consistent Christian, and a valuable citizen, in every sense of the word. His death was mourned as a public calamity; and his life, pure and spotless, active and useful, exhibited a bright exemplar for the imitation of the young men of America.

1The people of Maryland, as represented in its State Convention, were alarmed lest their enthusiastic delegates should favor independence, and early in 1776 they sent them instructions, in which they forbade their voting for such a measure. They also passed a resolution "that Maryland would not be bound by a vote of a majority of Congress to declare independence."