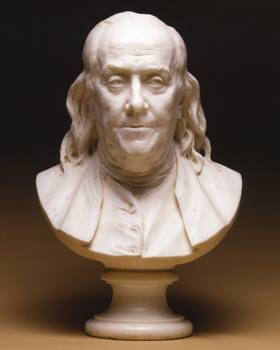 This Benjamin Franklin letter is part of a series of letters Franklin wrote revealing his observations and experiments about electricity. The first five letters were published by his British friend Peter Collinson in a book called "Experiments and Observations on Electricity Made at Philadelphia in America." The book made Franklin a household name throughout Europe and America. This fame responsible for Franklin's success in getting help from the French government during the American Revolution many years later.

In this letter to Cadwallader Colden, Franklin responds to some questions sent to him by Colden. He speculates that in the future electrical power can be harnessed in massive quantities and talks about how various materials conduct electricity, such as water, air and metal. You can read the other letters here - Benjamin Franklin and Electricity letters.

I enclose you Answers, such as my present Hurry of Business will permit me to make, to the principal Queries contain'd in your Favour of the 28th Instant, and beg Leave to refer you to the latter Piece in the printed Collection of my Papers for farther Explanation of the Difference between what are called Electrics per se, and Non Electrics. When you have had Time to read and consider those Papers, I will endeavour to make any other new Experiments you shall propose, that you think may afford farther Light or Satisfaction to either of us, and shall be thankful for such Remarks, Objections, &c. as may occur to you. I forget whether I wrote you, that I have melted brass Pins and Steel Needles, inverted the Poles of the magnetic Needles, given Magnetism and polarity to Needles that had none, and fired dry Gunpowder, by the Electric Stroke. I have five Bottles that contain 8 or 9 Gallons each, two of which charg'd, are sufficient for the above purposes; but I can charge and discharge them all together. There are no Bounds (but what Expence and Labour give) to the Force Man may raise and use in the Electric Way: For Bottle may be added to Bottle in infinitum, and all united and discharg'd together as One, the Force and Effect proportion'd to their Number and Size. The greatest known Effects of common Lightning, may, I think, without much Difficulty be exceeded in this way: Which a few Years since could not have been believed, and even now may seem to many a little extravagant to suppose. So we are got beyond the Skill of Rabelais's Devils of two Year old, who, he humourously says, had only learnt to thunder and lighten a little round the Head of a Cabbage. I am, with sincere respect, Dear Sir, Your most obliged humble Servant

Query 1. Wherein consists the Difference between an Electric, and a Non electric Body.

Answ. The Terms Electric per se and Non Electric were first used to distinguish Bodies, on a mistaken Supposition that those alone, called Electric per se, contained electric Matter in their Substance which was capable of being excited by Friction and of being produc'd or drawn from them and communicated to those called Non Electrics suppos'd to be destitute of it: For Glass, &c. being rubbed discover'd Signs of having it, by snapping to the Finger, attracting, repelling, &c. and could communicate those Signs to Metals and Water. Afterwards it was found, that rubbing of Glass would not produce the Electric Matter, unless a Communication was preserv'd between the Rubber and the Floor; and subsequent Experiments prov'd that the Electric Matter was really drawn from those Bodies that at first were thought to have none in them. Then it was doubted whether Glass and other Bodies called Electrics per se had really any Electric Matter in them, since they apparently afforded none but what they first extracted from those which had been called Non Electrics. But some of my Experiments show that Glass contains it in great Quantity; and I now suspect it to be pretty equally diffus'd in all the Matter of this terraqueous Globe. If so, the Terms Electric per se and Non Electric should be laid aside as improper; and (the only Difference being this, that some Bodies will conduct Electric Matter, and others will not) the Terms Conductors and Non Conductors may supply their Place. If any Portion of Electric Matter is apply'd to a Piece of Conducting Matter, it penetrates and flows thro' it, or spreads equally on its Surface according as situated or circumstanc'd; if apply'd to a Piece of Non Conducting Matter, it will do neither. Perfect Conductors of Electric Matter are only Metals and Water; other Bodies conducting only as they contain a Mixture of those, without more or less of which they will not conduct at all. This (by the way) shows a new Relation between Metals and Water heretofore unknown; and seems to favour some [torn] Opinions of the Formation [torn] Water.

Query 2. What are the Effects of Air in Electric Experiments?

Answ. All I have hitherto observ'd are these. Moist Air receives and conducts the electric Matter in proportion to its Moisture; quite dry Air not at all. Air is therefore to be rank'd with the Non Conductors. Dry Air assists in confining the Electrical Atmosphere to the Body it surrounds, and prevents its dissipating; for in Vacuo it quits easily, and Points operate stronger, i.e. they throw off or attract the Electrical Matter more freely and at greater Distances; so that Air intervening obstructs its passing from Body to Body in some Degree. A clean Electric Phial and Wire containing dry Air instead of Water, will not be charg'd nor give a Shock, no more than if it was fill'd with Powder of Glass: But exhausted of Air it operates as well as if fill'd with Water. Yet an Electric Atmosphere and Air do not seem to exclude each other; for we breathe freely in such an Atmosphere; and dry Air will blow through it without displacing or driving it away. I question whether the Strongest dry Northwester would dissipate it. I once electrify'd a large Cork Ball at the End of a Silk Thread 3 feet long, the other End of which I held in my Fingers, and whirl'd it round like a Sling 100 Times in the Air, with the swiftest Motion I could possibly give it, yet it retain'd its Electrical Atmosphere, tho' it must have pass'd thro' 800 Yards of Air, allowing my Arm in giving the Motion to add a foot to the Semidiameter of the Circle. By quite dry Air, I mean the driest we have, perhaps we never have any perfectly free from Moisture. An Electric Atmosphere rais'd round a thick Wire inserted in a Phial of Air, drives out none of the Air, nor on withdrawing that Atmosphere will any Air rush in, as I have found by a very curious Experiment accurately made; whence one would think the Air's Elasticity not affected thereby.