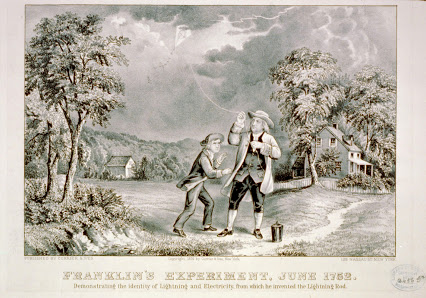 This Benjamin Franklin letter is part of a series of letters Franklin wrote about electricity that made him a household name. He wrote the letters in the late 1740s and early 1750s to his friend Peter Collinson in London, a member of the Royal Society who supplied the "Library Company of Philadelphia" with books and other items. This was a lending library which Franklin helped found.

Collinson recognized the importance of Franklin's discoveries and had the letters published in a book called "Experiments and Observations on Electricity Made at Philadelphia in America." This book was so widely distributed that it became the most printed book of the eighteenth century. The fame Franklin earned in France helped him secure the support of the French monarchy years later in the cause of the American Revolution.

In this particular letter, Franklin discusses lightning strikes on ships at sea, the polarity of electrically charged objects and how to light gunpowder with electricity. You can read the other letters in the series at our Benjamin Franklin and Electricity letters

In Capt. Waddels Account of the Effects of Lightning on his Ship, I could not but take Notice of the large Comazants (as he Calls them,) that settled on the Spintles at the Topmast-Heads, and burnt like very large Torches before the Stroke.

According to my Opinion, the Electrical Fire was then drawing off, as by Points, from the Cloud, the largeness of the Flame, betokening the great quantity of Electricity in the Clouds - and had there been a good Wire communication from the Spintle Heads to the Sea, that could have conducted more freely than Tarred Ropes, or Masts of Turpintine Wood, I Imagine, there would either have been no Stroke, or, if a Stroke, the Wire would have conducted it all into the Sea without Damage to the Ship.

His compasses Lost the Vertue of the Load Stone or the Poles [were] reversed, the North point turning to the South. By Electricity wee have Here frequently given polarity to Needles, and reversed It at pleasure. Mr. Wilson tryed it with too small a force. A Shock from four large Glass Jarrs, sent thro a fine Sewing Needle, gives it polarity; and it will traverse when laid on Water.

If the Needle, when Struck, lies East and West, the End entred by the Electric Blast points North.

If it lies north and South, the End that lay towards the North, will continue to point North when placed on Water, whether the fire Entred at that End, or the Contrary End.

The Polarity is given strongest when the Needle [is] Struck lying N. and S, weakest when lying E and W.

Perhaps if the Force was still Greater, the S. End, Entred by the Fire, when the Needle lies N and S, might become the North.

Otherwise it puzzles us to account for the Inverting of Compasses by Lightning, since their Needles must always be found in that Situation, and by our little Experiment, whether the Blast entred the North, and went out at the South End of the Needle, or the Contrary, the End, that lay to the North, still should continue to point North. I have not yet had Time to read and Consider Dr. Knight's, Essay's just now received from you, which possibly may Explain this.

In these Experiments the Ends of the Needles are sometimes finely blew'd, like a Watch Spring, by the Electric Flame. This colour given by the Flash from Two Jars only will Wipe off but Four will fix It and frequently Melt the Needles. I send you some that have had their Heads and points melted off by our Mimic Lightning, and a pin, that had its point melted off, and some part of its head and Neck run.

Sometimes the surface on the Body of the Needles is also Run, and appears blisterd, when examined by a magnifying Glass. The Jarrs I make Use of hold 7 or 8 Gallons, and are Coated and Lined with Tin foil. Each of them takes 1000 Turns of a Globe 9 Inchs Diameter to Charge It. I send you Two specimens of Tinfoil melted between Glass, by the Force of Two Jarrs only.

I have not hear'd, that any of your European Electricians have heitherto been able to fire Gunpowder by the Electric Flame. Wee do it here in this Manner.

A small Cartridge is filled with Dry powder, hard rammed, so as to bruise some of the Grains. Two pointed Wires are then thrust In, one at Each End, the points approaching Each other in the Middle of the Cartridge, till within the distance of half an Inch: Then the Cartridge being placed in the Circle, when the Four Jarrs are discharged, the Electric Flame leaping from the point of one Wire to the point of the other, within the Cartridge, among the powder, fires It, and the Explosion of the powder is at the same Instant with the Crack of the Discharge. I am Sir your Humble Servant