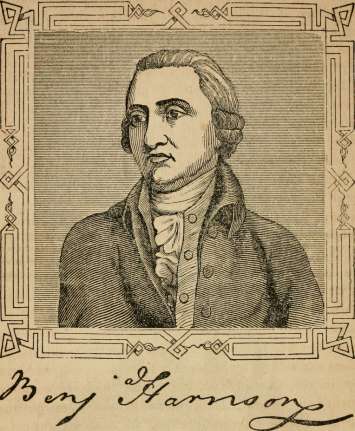 Benjamin Harrison was born in Berkley, in Virginia, but the exact time of his birth is not certainly known. His ancestors were among the earlier settlers of that colony, having emigrated thither from England, in the year 1640. His paternal ancestor married in the family of the king's surveyor-general, and this gave him an opportunity to select the most fertile regions of the State for settlement and improvement. Thus he laid the foundation of that large estate which is still in the hands of the family.

The subject of this sketch was placed by his father in the college of William and Mary, with a view of giving him a thorough classical education. He was there at the time of his father's decease, which was sudden and awful ;1 and having had a dispute with one of the professors, he left the institution before the close of his term, and never returned to get his degree. Being the eldest of six sons, the management of the estate of his father devolved on him at his decease, and, although then a minor he performed his duties with great fidelity and skill.

Young Harrison, at a very early age, became a member of the Virginia House of Burgesses,2 where his talents and sound judgment won for him the confidence and esteem of all parties. He was soon elected Speaker, and became one of the most influential men in that Assembly, where he occupied a seat during the greater part of his life. His great wealth, distinguished family connections, and personal worth, attracted the attention of the royal governor, who, desirous of retaining him on the side of the government, when the political agitations caused by the Stamp Act took place, offered him a seat in the executive council. But he had narrowly watched the gradual development of events, and he was convinced that a systematic scheme for enslaving the colonies was being matured by the home government. He therefore rejected the offer of the governor, boldly avowed his attachment to the republican cause, and joined with the patriotic burgesses of Virginia in their opposition to the oppressive acts of the British government.3

Mr. Harrison was one of the first seven delegates from Virginia to the Continental Congress of 1774, and he had the gratification of seeing Peyton Randolph, a very near relative, and his colleague from Virginia, elected president of that august body. Immediately after the return of the delegates to Virginia, a convention met in Richmond, and all the acts of the General Congress were sanctioned by them. They re-elected Mr. Harrison, with others, a delegate to the Congress of 1775, which met on the tenth of May of that year. During the autumn, he was appointed by Congress one of a committee to visit the army under Washington, at Cambridge near Boston and co-operate with the Commander-in-Chief in devising plans for future operations. Toward the close of 1775, he was appointed chairman of a committee to carry on foreign correspondence,4 and in that capacity he labored with fidelity until the spring of 1777, when the necessity of such a committee no longer existed; a special agent or commissioner having been sent to Europe, and a new committee on foreign affairs organized, with different duties; and a secretary, who received a stipulated salary.

Mr. Harrison was constantly employed in active service, and was always among the first in advocating decisive and energetic measures. He was warmly in favor of independence, and when that great question was under discussion in committee of the whole, he was in the chair. He voted for the Declaration of Independence, on the fourth of July, 1776, and signed it on the second of August following. In 1777, his private affairs, and also public matters in his own State, demanded his presence there, and he resigned his seat in Congress and returned home.

He was immediately elected a member of the House of Burgesses, and as soon as he took his seat, he was elevated to the Speaker's chair. That office he held until 1782, without interruption.

Having been appointed lieutenant of his native county, (which appointment constituted him commander of all the militia, with the title of colonel, and also presiding judge in all the civil courts of the county,) he was very active and efficient at the time the traitor Arnold invaded Virginia, and afterward when Cornwallis made incursions into it.

In 1782, Mr. Harrison was elected governor of the State, and he managed public affairs at that trying time, with great ability and firmness. He was governor two successive terms, and then retired to private life. But he was almost immediately elected a member of the House of Burgesses, and again resumed the Speaker's chair, by election.

In the year 1790, he was nominated for governor, but he declined on account of the then incumbent having filled the chair only two years ; and he successfully promoted his re-election. Mr. Harrison was again elected governor in 1791, and the day after his election he invited a party of friends to dine with him. He had been suffering a good deal from gout in the stomach, but had nearly recovered. That night he experienced a relapse, and the next day death ended his sufferings. This event occurred in April, 1791.

Mr. Harrison was married in early life, to a niece of Mrs. Washington, Miss Elizabeth Bassett, who lived but one year after her husband's decease. They had a numerous offspring, but only seven lived to mature age. One of these was the lamented and venerated William Henry Harrison, late President of the United States.

1 This venerable man, and two of his four daughters, were instantly struck dead by lightning, during a violent thunder storm, in their mansion house at Berkley.

3 Even before the Stamp Act was proposed, some of the measures of the British Parliament, affecting the interests of the American colonies, produced alarm, and the Virginia House of Assembly appointed a committee to draw up an address or petition to the king. Mr. Harrison was one of that committee.

4 Congress deemed it essential to have a good understanding with the rival powers of Great Britain, and in order to have some communication with them (which could not be done by open diplomacy) this committee was established for the purpose, as expressed by the resolution constituting it, "to hold correspondence with the friends of America in Great Britain, Ireland, and other parts of the world."