The Bennington Flag is one of the more popular American Revolution Flags, although its history is in doubt. The flag was allegedly flown at the Battle of Bennington by the troops of Brigadier General John Stark and carried off the battlefield by Nathaniel Fillmore, grandfather of President Millard Fillmore who is said to have once been in possession of the flag. Historians now agree that the flag is probably dated much later than the Revolutionary War. You can read more about the history of this popular flag below. 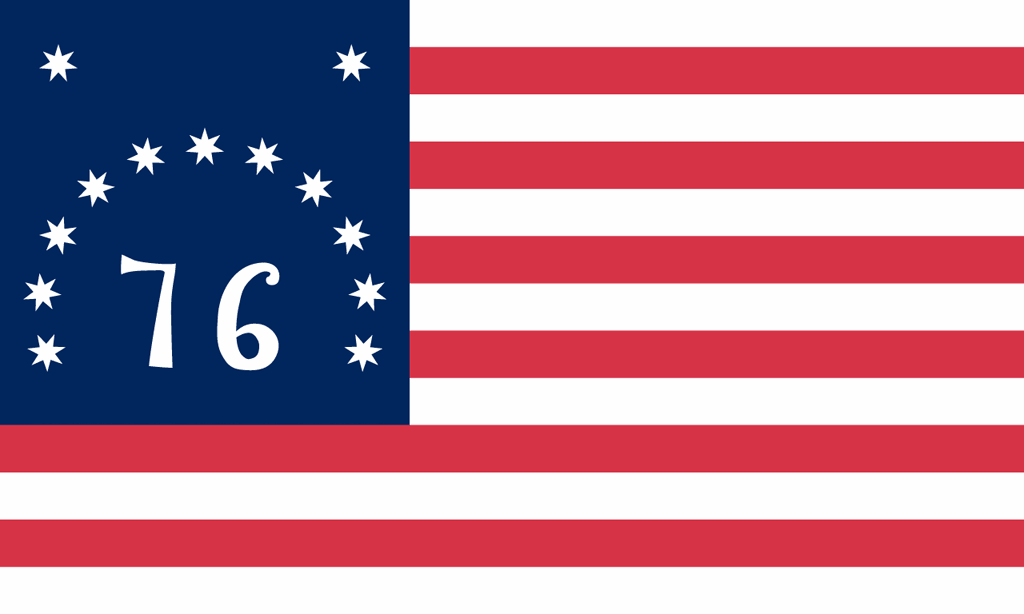 The Bennington Flag is distinctive because of the large 76 in the blue canton. The flag has the familiar 13 stars and 13 stripes, but in a very different pattern from many other flags of the Revolutionary War era. Eleven of the stars form an arc over the number 76, with two more stars in the upper left and right corners. The stars have seven points, which was common for flags in the colonial era. The stripes are also backwards from what we know today, with the white stripes on the outside. This is in keeping with traditional rules of heraldry, which is the art of flagmaking. The flag is also distinctive because the canton (the blue section) is longer than usual, being 9 stripes deep, instead of the more familiar 7. 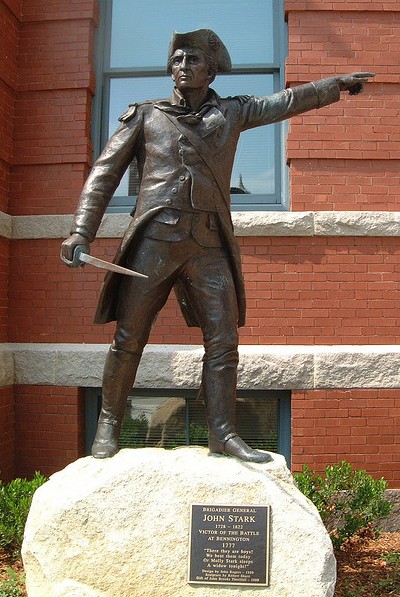 There is a colorful legend that goes along with the Bennington Flag, though most historians now doubt its authenticity. The legend goes that the flag was carried by troops under General John Stark at the Battle of Bennington near Bennington, Vermont on August 16, 1777.

The Battle of Bennington was significant because it started a chain reaction of events leading to the surrender of General John Burgoyne's army at the Battle of Saratoga, a major turning point in the war because it was the first defeat of a British General and because it showed France that the Americans were capable encouraging them to join the Americans against the British.

The Americans had a large ammunition store at Bennington. General Stark disobeyed his orders to go to Saratoga and went to Bennington to engage the British there instead. General Burgoyne had sent Lieutenant Colonel Friedrich Baum with 700 men to capture the ammunition supply. According to tradition, when General Stark saw the British coming down the road, he exclaimed, "There are your enemies, the Red Coats and the Tories. They are ours, or this night Molly Stark sleeps a widow!" Or, some versions have Stark saying, "Boys, there they are. We beat them today, or Molly Stark's a widow!" Stark and 1,500 militiamen surrounded Lt. Baum's men, taking many prisoners and killing Baum.

Reinforcements came for both sides. General Stark was joined by Colonel Seth Warner and his Green Mountain Boys, a unit of militiamen from New Hampshire and the area that would become Vermont. Stark and the Green Mountain Boys annihilated the British force. Out of 1,000 men sent by General Burgoyne, only about 100 made it back. The huge loss of men, his Indian allies abandoning him and the lack of needed supplies, all contributed to Burgoyne's surrender at Saratoga in October.

The Bennington Flag was allegedly created by Molly Stark, General Stark's wife. It was supposedly flown over military stores at Bennington. Other traditions put the flag directly in the battle. It was then carried off the battlefield by Nathaniel Fillmore. Fillmore gave the flag to his nephew, Colonel Septa Fillmore, who later carried the flag in the Battle of Plattsburg (Lake Champlain) in 1814, which was the turning point in the War of 1812. Because of its association with the Fillmore family, this flag is also sometimes called the Fillmore Flag. 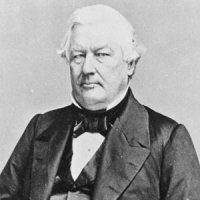 After Septa, the flag passed to various relatives, including Millard Fillmore, who would one day become the 13th President of the United States. The flag was passed on to other family members and was at one time in the possession of Philetus P. Fillmore who displayed the flag at his home in Aurora, Illinois during the centennial celebration of American Independence in 1876.

The flag traveled to Monticello, Minnesota with Philetus' nephew, Franklin Bosworth Fillmore. Franklin carried the Bennington Flag at the head of the Parade of the Grand Army of the Republic, which was held in Minneapolis in 1887. During the parade, the flag was vandalized by a souvenir hunter who took off the top stripe and one of the stars.

Eventually the Bennington Flag found its way into the hands of Maude Fillmore Wilson. Maude gave the flag to the Chicago Public Library. The flag was later "rediscovered" by John Spargo, who was director of the Bennington Museum in Bennington, Vermont. The flag can be found at the Bennington Museum today. The colors are so faded that the blues and reds have turned to shades of tan and brown. In 1995-1996, the Bennington Flag underwent conservation at the Textile Conservation Center at the Museum of American Textile History in Lowell, Massachusetts. Dirt and dust were removed, the fibers were stabilized to prevent future deterioration and the flag was put inside a protective case to shield it from dirt, humidity and light.

The truth of the Bennington Flag

The flag's fabric is made of single-twist cotton threads and its sewing threads are double-twist cotton. The low number of plys is consistent with this early cotton milling technology. Before the year 1800, flags were typically made of silk, linen or wool bunting. Cotton was not widely available at that point. Cotton thread was not even manufactured until the mid-1800s. This was also the early of stages of using dyes to color cotton fabric, which is probably why the colors have faded so badly over time. The dying technology at the time the flag created simply wasn't that good. These facts remove any connection to the Revolutionary War.

Scholars have come up with a few other likely sources for the Bennington Flag. Some believe the flag was created to celebrate the 50th anniversary of the Declaration of Independence in 1826 or for the 1824 visit of General Lafayette to the United States. Most historians, however, believe the flag was created during the War of 1812. The '76' was added to inspire the soldiers to remember the victories of the Revolutionary War.

Besides the fact that the material shows the Bennington Flag was created much later than the legend indicates, the flag is also much too large to be carried into battle. It is of a size that would more likely be flown in a stationery position over a fort or some such place. This at least indicates that the flag was probably not used in battle as the story tells.