Edward Rutledge was of Irish descent. His father, Doctor John Rutledge, emigrated from Ireland to America, in 1735, and settled at Charleston, South Carolina. He there commenced practice as a physician, in which he was very successful, and in the course of a few years, he married a young lady by the name of Hert, who brought him, as a marriage dowry, an ample fortune. When she was twenty-seven years of age, Dr. Rutledge died, and left her with a family of seven children, of whom Edward, the subject of this memoir, was the youngest. He was born at Charleston, in November, 1749. 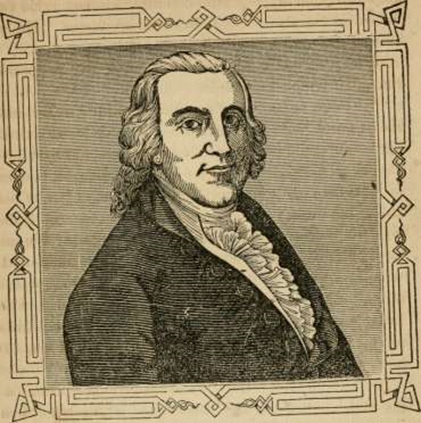 After receiving a good English and classical education, young Rutledge commenced the study of law with his elder brother, John, who was then a distinguished member of the Charleston bar. As a finishing stroke in his legal education, preparatory to his admission to the bar, he was sent to England at the age of twenty, and entered as a student at the Inner Temple, London,* where he had an opportunity of witnessing the forensic eloquence of those master spirits of the times, Mansfield, Wedderburn, Thurlow, Dunning, Chatham and Camden. He returned to Charleston about the close of 1772, was admitted to the bar, and commenced practice early in 1773. 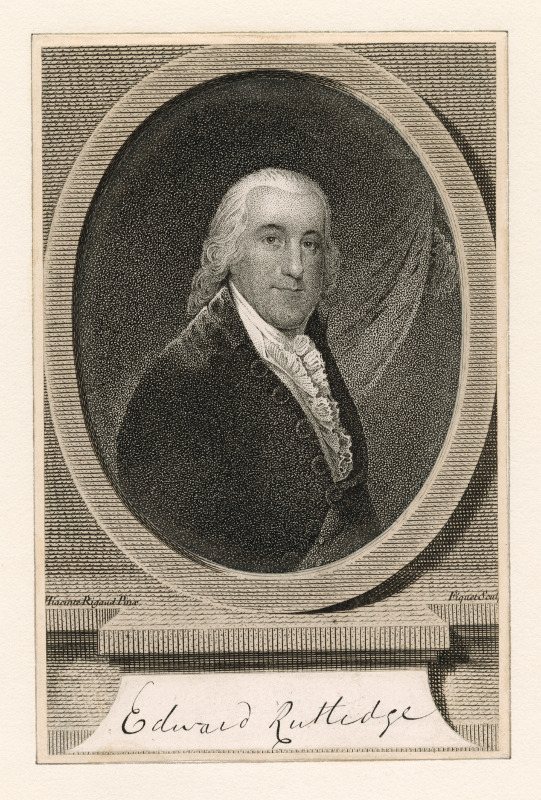 Mr. Rutledge, though young, had watched with much interest the political movements of the day, and when old enough to act as well as think, he took a decisive stand on the side of the patriots. This, together with the distinguished talents which he manifested on his first appearance at the bar, drew toward him the attention of the public mind, when the Massachusetts Circular aroused the people to vigorous action. Although then only twenty-five years of age, the convention of South Carolina elected him a delegate to the first General Congress, and he was present at the opening, on the fifth of September, 1774. There he was active and fearless, and receiving the entire approbation of his constituents, he was re-elected in 1775, and 1776 : and when, preparatory to the consideration of the subject of absolute independence, Congress, by resolution, recommended the several colonies to form permanent governments, Mr. Rutledge was associated with Richard Henry Lee and John Adams, in preparing the prefatory preamble to the recommendation. He was warmly in favor of independence, and fearlessly voted for the Declaration, notwithstanding there were large numbers of people in his State opposed to it, some through timidity, some through self-interest, and some through decided attachment to the royal cause. 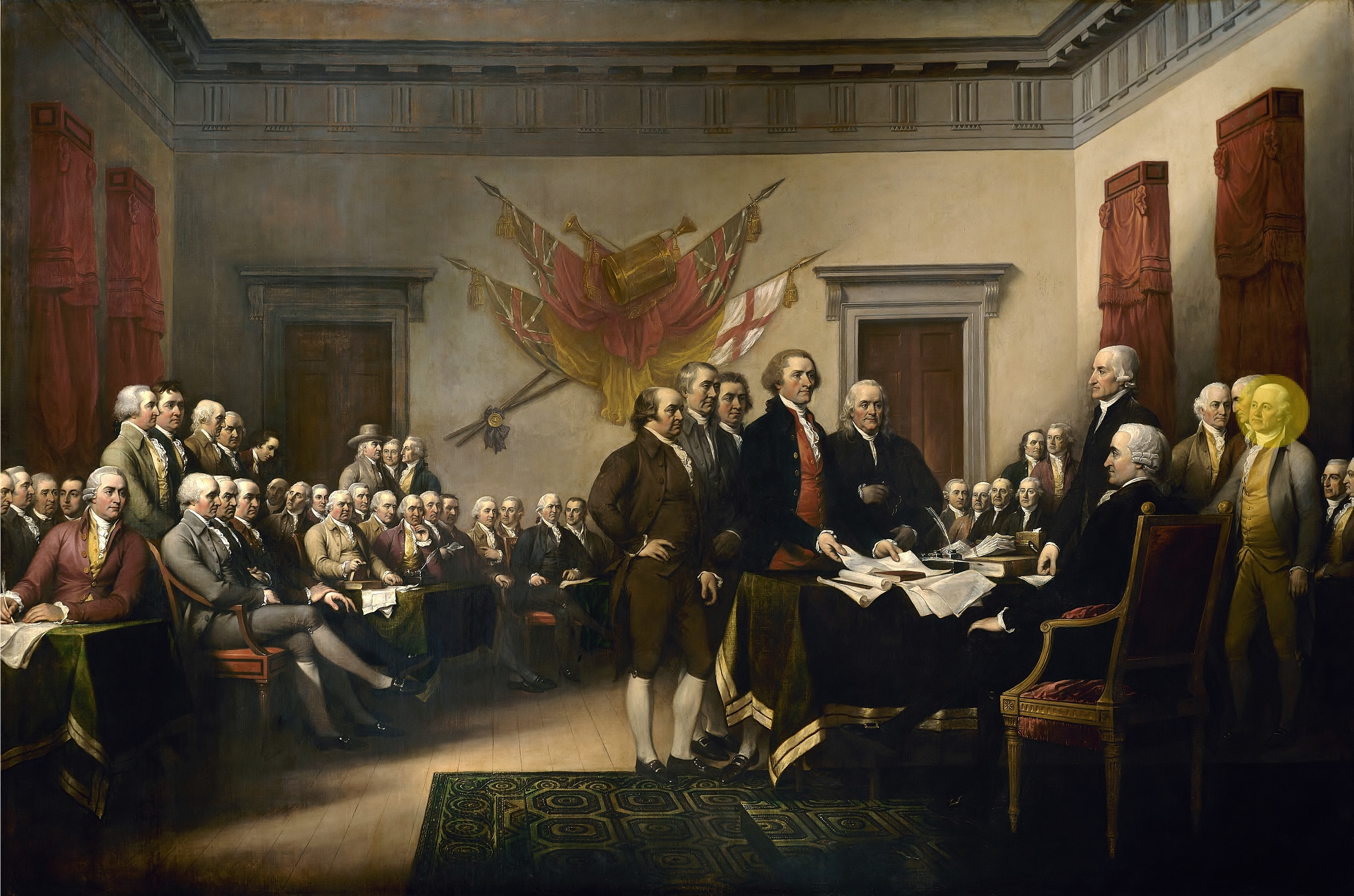 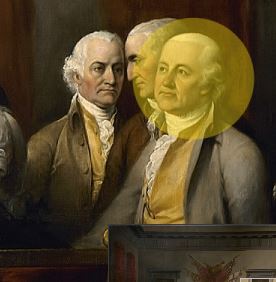 When, during the summer of 1776, Lord Howe, came commissioned to prosecute the war or negotiate for peace, Mr. Rutledge was appointed one of a committee with Dr. Franklin and John Adams, to meet him in conference upon Staten Island. The commissioners were instructed not to enter upon negotiations for peace, except in the capacity of representatives of free states, and having independence as a basis. As Lord Howe could not thus receive them, or listen to such proposals, the conference, as was anticipated, failed to produce any important results.
Partly on account of ill health, and partly because of the disturbed condition of his State, he withdrew from Congress in 1777, but was returned again in 1779. In the interval he was actively engaged at home in measures for the defence of the State, and to repel invasion.

Mr. Rutledge took up arms and was placed at the head of a corps of artillery. In 1780, while Charleston was invested by the enemy, he was active in affording succor to General Lincoln, then within the besieged city. In one of these operations, in attempting to throw troops into the city, he was taken prisoner, and was afterward sent captive to St. Augustine in Florida.** He remained a prisoner nearly a year, and was then exchanged and set at liberty. It was a gloomy time for the patriots, and the stoutest hearts began to quail. The bulk of the southern army, under Lincoln, had been made prisoners. But still hope did not quite expire, and the successes of Greene, and the victories of Marion and Sumpter, reanimated the fainting hearts of the republicans. 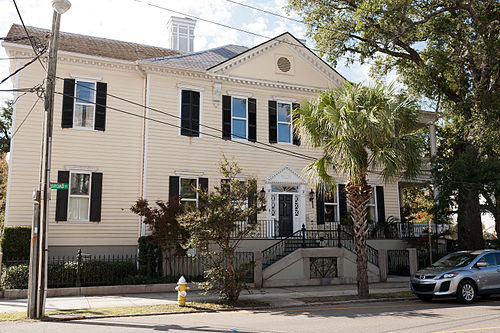 After the British evacuated Charleston in 1781, Mr. Rutledge retired, and resumed the practice of his profession; and for about seventeen years, his time was alternately employed in the duties of his business and service in the Legislature of his State. In the latter capacity he uniformly opposed every proposition for extending the evils of slavery.***

In 1794, Mr. Rutledge was elected to the United States Senate, to supply the vacancy caused by the resignation of Charles Cotesworth Pinckney; and in 1798, he was elected Governor of his native State. But he did not live to serve out his official term. He had suffered much from hereditary gout, and on returning to Charleston after the adjournment of the Legislature, which sat at Columbia, he caught a severe cold, that brought on a paroxysm of his disease and terminated his life on the twenty-third day of January, in the year 1800. He was in the sixtieth year of his age.

* A number of Inns of Court, or sort of colleges for teaching the law were established in London at various times. The Temple (of which there were three Societies, namely, the Inner, the Middle, and the Outer) was originally founded, and the Temple Church built, by the Knights Templar, in the reign of Henry II, 1185. The Inner and Middle Temple were made Inns of Law In the reign of Edward III, about 1340; the Outer, not until the reign of Elizabeth, about 1560. -- See Stowe's Survey.

** After the fall of Charleston, and the capture of Lincoln and the American army, Cornwallis became fearful of the influence of many citizens, and finally adopted a most cowardly measure. By his order, the Lieutenant Governor, (Gadsden,) most of the civil and military officers, and some others of the friends of the republicans, of character, were taken out of their beds and houses by armed parties, and collected at the Exchange, when they were conveyed on board a guard-ship, and transported to St. Augustine. Mr. Rutledge was one of the number. His mother did not escape the persecutions of their masters. Cornwallis also feared her talents and influence, and compelled her to leave her country residence and move into the city, where she would be more directly under the vigilant eye of his minions.

*** As a means of relief to those who, during the war, had lost a great many slaves, and were pressed for payment by those of whom they were purchased on credit, it was proposed to import a sufficient number, either from the West Indies, or from Africa direct, to make up the deficiency. All such evil propositions met no favor from Edward Rutledge.