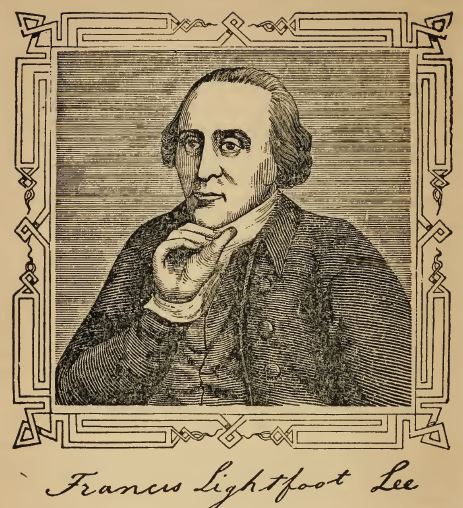 Francis Lightfoot Lee, a younger brother of Richard Henry Lee, was born in Westmoreland county, Virginia, on the fourteenth day of October, 1734. He was too young when his father died to be sent abroad to be educated, but was favored with every advantage in the way of learning which the colony afforded. He was placed at an early age under the care of the Reverend Doctor Craig, a Scotch clergyman of eminent piety and learning. His excellent tutor not only educated his head but his heart, and laid the foundation of character, upon which the noble superstructure, which his useful life exhibited, was reared.

On the return of Richard Henry Lee from England, whither he had been to acquire a thorough education, Francis, who was then just stepping from youth into manhood, was deeply impressed with his various acquirements and polished manners, and adopted him as a model for imitation. He leaned upon his brother's judgment in all matters, and the sentiments which moved the one impelled the other to action. And when his brother with his sweet voice and persuasive manner, endeavored, by popular harangues, to arouse his friends and neighbors to a sense of the impending danger, which act after act of British oppression shadowed forth, Francis caught his spirit; and when he was old enough to engage in the strife of politics, he was a full-fledged patriot, and with a " pure heart and clean hands" he espoused the cause of freedom.

In 1765, Mr. Lee was elected a member of the Virginia House of Burgesses, for Loudon county, while his brother was member of the same House, for Westmoreland county. By annual election, he continued a member of the Virginia Assembly for Loudon, until 1772, when he married the daughter of Colonel John Taylor, of Richmond, and moved to that city. He was at once elected a member for Richmond, and continued to represent that county until 1775, when the Virginia Convention elected him a delegate to the Continental Congress. During his whole term of service in the General Assembly of his State, he always acted in concert with the patriotic burgesses. Mr. Lee was not a fluent speaker, and seldom engaged in debate; but his sound judgment, unwavering principles, and persevering industry, made him a useful member of any legislative assembly. He sympathized with his brother in his yearnings for independence, and it was with great joy, that he voted for and signed the instrument which declared his country free.

Mr. Lee continued in Congress, until 1779, and was the member, for Virginia, of the committee which framed the Articles of Confederation. Early in the spring of 1779, he retired from Congress and returned home, with the intention of withdrawing wholly from public life, to enjoy those sweets of domestic quiet which he so ardently loved. But his fellow citizens were unwilling to dispense with his valuable services, and elected him a member of the Virginia Senate. He, however, remained there but for a brief season, and then bade adieu to public employments. He could never again be induced to leave his domestic pleasures ; and he passed the remainder of his days in agricultural pursuits, and the enjoyments to be derived from reading and study, and the cheerful intercourse with friends. Possessed of ample wealth, he used it like a philosopher and a Christian in dispensing its blessings for the benefit of his country and his fellow men. 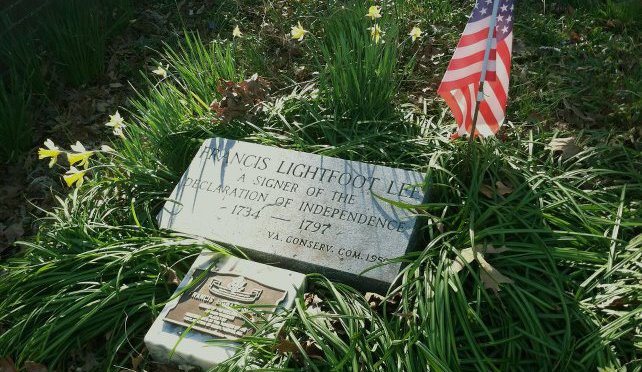 In April, 1797, he was prostrated, by an attack of pleurisy, which terminated his life in the course of a few days. He was in the sixty-third year of his age. His wife was attacked by the same disease, and died a few days after the decease of her husband.