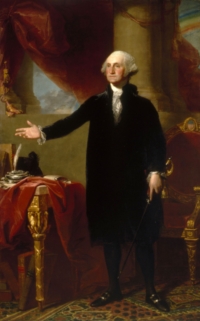 In this George Washington letter, the Commander in Chief of the Continental Army expresses his regret that John Hancock will be retiring as head of the Continental Congress. He commends Hancock for his professional work and offers him a military escort on his return home for his safety. Hancock intended to take a leave of absence for only two months, but never returned to the position. As President of Congress, he oversaw the Declaration of Independence, the adoption of the Articles of Confederation and the defeat of General Burgoyne at Saratoga, a pivotal turning point in the Revolutionary War for the colonists. You can read the letter below.

It gives me real pain to learn, that the declining state of your health, owing to your unwearied attention to public business, and the situation of your private affairs, oblige you to relinquish a station, though but for a time, which you have long filled with acknowledged propriety. Motives as well of a personal as of a general concern make me regret the necessity that compels you to retire, and to wish your absence from office may be of as short duration as possible. In the progress of that intercourse, which has necessarily subsisted between us, the manner in which you have conducted it on your part, accompanied with every expression of politeness and regard to me, gives you a claim to my warmest acknowledgements.

I am not so well informed of the situation of things up the North River, as to be able to give you any satisfactory advice about your route. I should rather apprehend it might be unsafe for you to travel that way at this time, and would recommend, if you can do it without any material inconvenience, that you should defer your journey till there is some change in affairs there, or till they have taken a more settled form. If you should, however, resolve to proceed immediately, and will be pleased to signify the time, an escort of horse will meet you at Bethlehem, to accompany you to General Putnam's camp, where you will be furnished with another escort in the further prosecution of your journey.

I am extremely obliged to you for your polite tender of services during your intended residence at Boston, and shall always be happy, when leisure and opportunity permit, if you will give me the pleasure of hearing from you. I have the honor to be, &c.