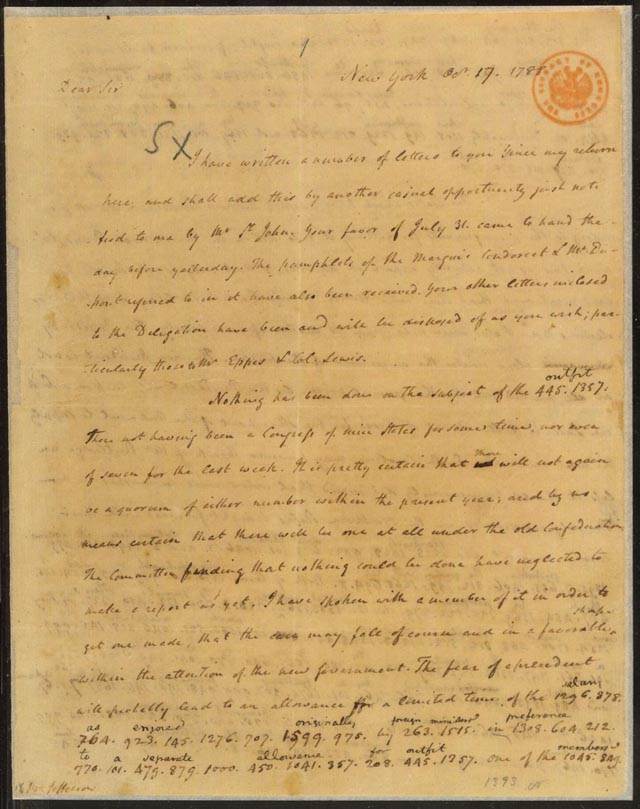 In this letter, James Madison discusses both sides of whether or not it would be necessary to add a bill of rights to the new Constitution with Thomas Jefferson. Phrases inside of brackets [] were written in cipher. This was a type of code that was often used in those days to keep others from understanding the contents if the letter was stolen or captured. Normally, each party would have a common book, and the code would say something like, "Page 65, 3rd line, 7th word, 2nd letter," for each ciphered character. The receiver would then look up the letter in his book and know how to translate the coded message.

I have written a number of letters to you since my return here, and shall add this by another casual opportunity just notified to me by Mr St. John.(1) Your favor of July 31 came to hand the day before yesterday. The pamphlets of the Marquis Condorcet & Mr. Dupont referred to in it have also been received. Your other letters inclosed to the Delegation have been and will be disposed of as you wish; particularly those to Mr. Eppes & Col. Lewis.

Nothing has been done on the subject of the [outfit]: there not having been a Congress of nine States for some time, nor even of seven for the last week. It is pretty certain that there will not again be a quorum of either number within the present year; and by no means certain that there will be one at all under the old Confederation. The Committee finding that nothing could be done have neglected to make a report as yet. I have spoken with a member of it in order to get one made, that the case may fall of course and in a favorable shape within the attention of the new Government. The fear of a precedent will probably lead to an allowance for a limited time, of the [salary as enjoyed originally] by [foreign ministers] in [preference to a separate allowance for outfit]. One of the [members of the treasury board](2) who ought, if certain facts have [not escaped his memory to witness the reasonableness of your] calculations, [takes occasion I find to impress a contrary idea]. Fortunately [his influence will] not [be a very formidable obstacle to right].

The States which have adopted the new Constitution are all proceeding to the arrangements for putting it into action in March next. Pennsylva. alone has as yet actually appointed deputies, & that only for the Senate. My last mentioned that these were Mr. R. Morris & a Mr. McClay. How the other elections there & elsewhere will run is matter of uncertainty. The Presidency alone unites the conjectures of the public. The vice president is not at all marked out by the general voice. As the President will be from a Southern State, it falls almost of course for the other part of the Continent to supply the next in rank. South Carolina may however think of Mr. Rutlidge unless it should be previously discovered that votes will be wasted on him. The only candidates in the Northern States brought forward with their known consent are [Hancock and Adams] and [between these it seems probable the question will lie]. Both of them [are objectionable and would I think be postponed] by the [general suffrage to several others] if they [would accept the place. Hancock] is [weak, ambitious, a courtier of popularity given to low intrigue] and [lately reunited by a factious friendship with S. Adams---;J. Adams] has made [himself obnoxious to many] particularly in the [Southern states by the political principles avowed in his book]. Others [recollecting his cabal during the war against General Washington], knowing [his extravagant self importance] and [considering his preference of an unprofitable dignity to] some [place of emolument] better [adapted to private fortune as a proof of his] having [an eye to the presidency conclude] that [he would not be a very cordial second to the general] and that [an impatient ambition] might [even intrigue for a premature advancement]. The [danger would be the greater if] particular [factious characters] as may be the case, [should get into the public councils. Adams] it appears, is [not unaware of] some [of the obstacles to his wish]: and [thro a letter to Smith] has [thrown out popular sentiments as to the proposed president].

Supposing a bill of rights to be proper the articles which ought to compose it, admit of much discussion. I am inclined to think that absolute restrictions in cases that are doubtful, or where emergencies may overrule them, ought to be avoided. The restrictions however strongly marked on paper will never be regarded when opposed to the decided sense of the public; and after repeated violations in extraordinary cases, they will lose even their ordinary efficacy. Should a Rebellion or insurrection alarm the people as well as the Government, and a suspension of the Hab. corp. be dictated by the alarm, no written prohibitions on earth would prevent the measure. Should an army in time of peace be gradually established in our neighbourhood by Britn. or Spain, declarations on paper would have as little effect in preventing a standing force for the public safety. The best security agst. these evils is to remove the pretext for them. With regard to monopolies they are justly classed among the greatest nusances in Government. But it is clear that as encouragements to literary works and ingenious discoveries, they are not too valuable to be wholly renounced? Would it not suffice to require in all cases a reserved right to the Public to abolish the privilege at a price to be specified in the grant of it? Is there not also infinitely less danger of this abuse in our Governments, than in most others? Monopolies are sacrifices of the many to the few. Where the power is in the few it is natural for them to sacrifice the many to their own partialities and corruptions. Where the power, as with us, is in the many not in the few, the danger can not be very great that the few will be thus favored. It is much more to be dreaded that the few will be unnecessarily sacrificed to the many.

I inclose a paper containing the late proceedings in Kentucky.(5) I wish the ensuing Convention may take no step injurious to the character of the district, and favorable to the views of those who wish ill to the U. States. One of my late letters communicated some circumstances which will not fail to occur on perusing the objects of the proposed Convention in next month. Perhaps however there may be less connection between the two cases than at first one is ready to conjecture.

I am Dr Sir with the sincerest esteem & Affectn, Yours, Js. Madison Jr

1. That is, Michel-Guillaume St. Jean de Crèvecoeur. Back
2. Arthur Lee. Back
3. Madison's is referring to James Wilson's speech of October 6, 1787, in which he had argued that a bill of rights was unnecessary. Back
4. Madison clearly meant to say "later." Back
5. The New York Daily Advertiser for October 10. Back