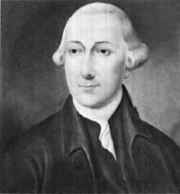 Joseph Hewes wrote this interesting letter to his friend James Iredell, whom George Washington would later appoint to the first Supreme Court. In the letter, Hewes discusses the efforts of Congress to acquire clothes, ammunition and supplies for the army. Hewes also questions Iredell about whether or not the British had attacked North Carolina and if the state had yet adopted a new constitution. The letter was written shortly before Joseph Hewes voted for the Declaration of Independence.

This being a day of humiliation, fasting and prayer, I mean to steal as much time from my private devotions as will serve to acknowledge the receipt of your agreeable favour of the 29th ultimo (last month) which has just reached me. Complaints of distresses made to our friends it is said is some alleviation of them-I cannot say the observation is true, however I must complain a little, an obstinate ague & Fever or rather an intermitting Fever persecutes me continually. I have no way to remove it unless I retire from Congress and from public business, this I am determined not to do till No. Carolina sends a further delegation provided I am able to crawl to the Congress Chamber. So much for self, a little politicks and I have done. Much of our time is employed in raising Men, making Cannon, Muskets & money, finding out ways & means of supplying our Troops with Cloaths, provisions & amunition. We appear to have everything we want. We resolve to raise regiments, resolve to make Cannon, resolve to make & import muskets, powder and Cloathing, but it is a melancholly truth that near half of our men, Cannon, muskets, powder, Clothe &c is to be found no where but on paper. We are not discouraged at this, if our Situation was ten times worse I would not agree to give up our cause. To the whole force of Great Britain has been added near half of Germany, 25,000 Hessians, Waldeckers and others have been expected for some time past, indeed the report of this day is, that a large detachment of them with the Commissioners are arived at Halifax in Nova Scotia. The latter, it is said are coming here to treat with Congress, in the mean time the former are to wait the event of the Treaty; if it succeeds not, they are to spread the horror and devastations of War from one end of the Continent to the other. Whither this be true or only the lye of the day I know not. It is too true that a great number of those Germans are taken into British pay. I have not heard any thing from your Congress at Halifax since the 22d of April. I am anxious to know how they go on in forming a Constitution, and more Anxious to know how they defend their Country, for I expect a formal attack has been made on it before this day. This you will receive by Mr Louther to whom I must refer you, he is just from head quarters and will be able to give you some acco. (account) of our army.

My Compliments to Mrs. Iredell & Mrs Blair. You and they have always the best wishes of, Dear Sir, your much obliged, & very huml (humble) Servt,