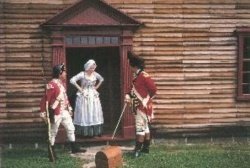 The Quartering of Troops was one of the contentious issues that incensed the colonists to rebel against England before the Revolutionary War. They believed it was unfair and illegal for the government to force them to provide quarters and food for its soldiers.

An act for the better providing suitable quarters for officers and soldiers in his Majesty's service in North America.

WHEREAS doubts have been entertained, whether troops can be quartered otherwise than in barracks, in case barracks have been provided sufficient for the quartering of all officers and soldiers within any town, township, city, district, or place, within his Majesty's dominions in North America: And whereas it may frequently happen, from the situation of such barracks, that, if troops should be quartered therein, they would not be stationed where their presence may be necessary and required: be it therefore enacted by the King's most excellent majesty, by and with the advice and consent of the lords spiritual and temporal, and commons, in this present parliament assembled, and by the authority of the same, That, in such cases, it shall and may be lawful for the persons who now are, or may be hereafter, authorised be law, in any of the provinces within his Majesty's dominions in North America, and they are hereby respectively authorised, impowered, and directed, on the requisition of the officer who, for the time being, has the command of his Majesty's forces in North America, to cause any officers or soldiers in his Majesty's service to be quartered and billetted in such manner as is now directed by law, where no barracks are provided by the colonies.

II. And be it further enacted by the authority aforesaid, That if it shall happen at any time that any officers or soldiers in his Majesty's service shall remain within any of the said colonies without quarters, for the space of twenty-four hours after such quarters shall have been demanded, it shall and may be lawful for the governor of the province to order and direct such and so many uninhabited houses, out-houses, barns, or other buildings, as he shall think necessary to be taken, (making a reasonable allowance for the same), and make fit for the reception of such officers and soldiers, and to put and quarter such officers and soldiers therein, for such time as he shall think proper.

III. And be it further enacted by the authority aforesaid, That this act, and every thing herein contained, shall continue and be in force, in all his Majesty's dominions in North America, until the twenty-fourth day of March, one thousand seven hundred and seventy-six.