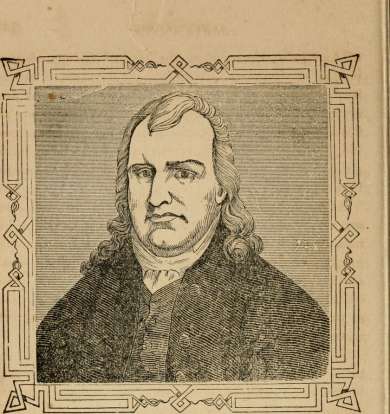 Samuel Chase was born on the seventeenth day of April, 1741, in Somerset county, Maryland. His father was a clergyman of the protestant episcopal church, and possessing an excellent education himself, he imparted such instruction to his son in the study of the classics, and in the common branches of an English education, as well fitted him for entering upon professional life. He commenced the study of law at the age of eighteen years, under Messrs. Hammond and Hall of Annapolis, who stood at the head of their profession in that section of the province. At the age of twenty he was admitted to practice before the mayor's court; and at twenty-two he became a member of the bar, and was allowed to practise in the chancery and other colonial courts. He located at Annapolis, where he soon became distinguished as an advocate, and one of the most successful lawyers in the province.

At the early age of twenty years, Mr. Chase was chosen a member of the Provincial Assembly, and there his independence of feeling and action in matters of principle greatly offended those time-serving legislators who fawned at the feet of the royal governor. There he first gave evidence of that stamina of character which he afterward so strongly manifested when called upon to act amid the momentous scenes of the Revolution.

The Stamp Act aroused the energies of his soul to do battle for his country's right, and he was among the first in Maryland who lifted up voice and hand against the oppressor.* He became obnoxious to the authorities of Annapolis, and they attempted, by degrading epithets, to crush his eagle spirit while yet a fledgling. But their persecution extended his notoriety, and he soon became popular with the great mass of the people. 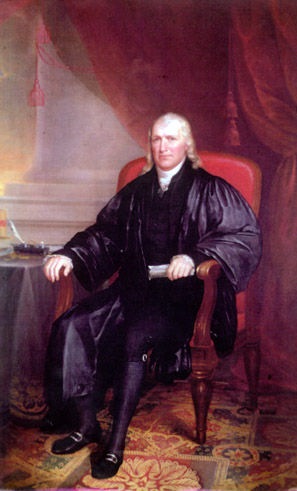 Mr. Chase was one of the five delegates to the first Continental Congress, in 1774, appointed by a convention of the people of Maryland. He was also appointed by the same meeting, one of the "Committee of Correspondence" for that colony.**These appointments made him obnoxious to the adherents to royalty, yet their good opinion was the least thing he coveted. In the General Congress he was bold and energetic, and even at that early day, he expressed his sentiments freely in favor of absolute independence. This feeling, however, was not general in the colonies, and the people were desirous of reconciliation by righteous means, rather than independence.

Mr. Chase was again elected to Congress in 1775, and with his usual zeal, he was active in promoting every measure for strengthening the military force of the country, then concentrated in the vicinity of Boston. He was also a delegate in 1776, and in the meanwhile he had used his growing influence and popularity to the uttermost in endeavoring to have the Maryland convention remove its restrictive instructions by which its delegates were prohibited from voting in favor of independence. This restriction was a galling yoke for him to bear, and he was very restiff under it. 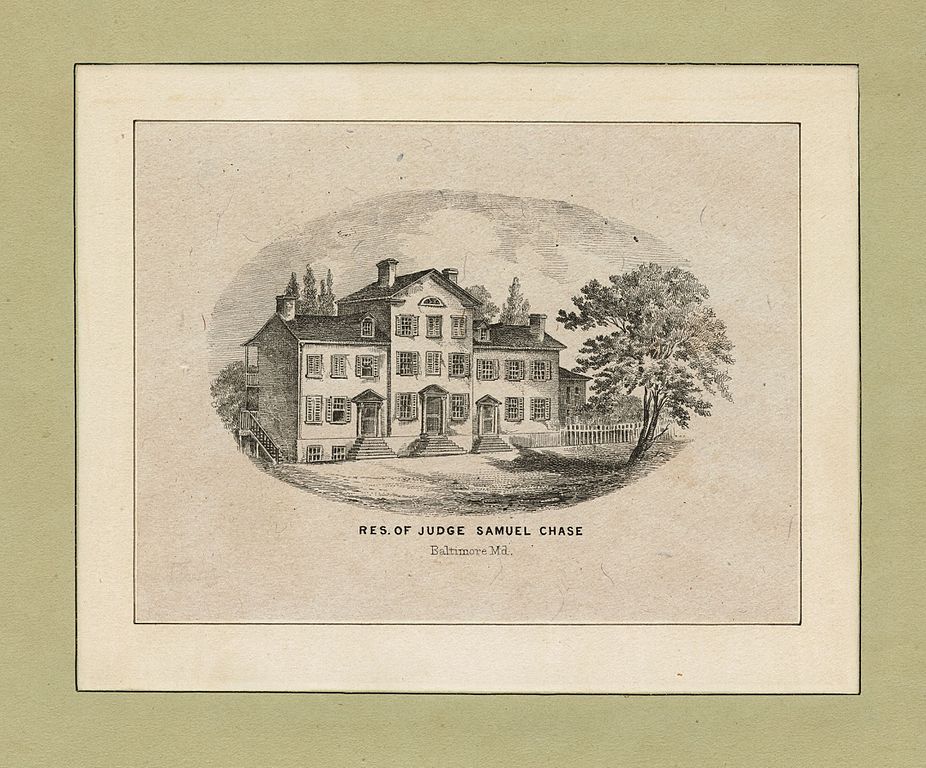 Early in the spring of 1776, he was appointed one of a committee with Dr. Franklin and Charles Carroll, to go on a mission to Canada, the chief object of which was to effect a concurrence, in that province, with the movements in the other English colonies. The mission, however, proved a failure, and on his return to his seat in Congress he found the subject of independence before that body. He was warmly in favor of the measure, and to his great joy and satisfaction, Maryland lifted her restrictions and left her representatives free to vote as they liked. Mr. Chase of course gave his vote for the Declaration of Independence, and signed the instrument with a willing hand.

He continued a member of Congress until in 1778, and was almost constantly employed in the duties of most important committees. Some of these were of a delicate and trying nature, yet he never allowed his sensibility to control his judgment, or shake his firmness of purpose.*** His private affairs demanding his attention, Mr. Chase withdrew from Congress toward the close of 1778, and he resumed the practice of his profession in Annapolis. He was engaged but little in public affairs for several years, and it was not until 1788, about ten years after he retired from Congress, that he again appeared in the arena of the political world. He was then appointed Chief Justice of the criminal court for the newly organized judicial district of Baltimore.**** He was that year chosen a member of the state convention of Maryland, called to consider the ratification of the Federal Constitution, and about the same time he received and accepted the appointment of Chief Justice of the Supreme Court of the state. In 1796, President Washington nominated him a judge of the Supreme Court of the United States, which nomination was confirmed by the Senate. He held the office about fifteen years, and no man ever stood higher for honesty of purpose and integrity of motives, than Judge Chase. Notwithstanding the rancor of such party feeling as dared to charge President Washington with appropriating the public money to his own private use, did all in its power to pluck the ermine from his shoulders,***** yet his purity beamed the brighter, as the clouds grew darker, and he lived to hear the last whisper of calumny flit by like a bat in the morning twilight. His useful life terminated on the nineteenth day of June, 1811, when he was in the seventieth year of his age.

Judge Chase was a man of great benevolence of feeling****** and in all his walks, he exemplified the beauties of Christianity, of which he was a sincere professor. At the time of his death he was a communicant in St. Paul's church in Baltimore, the parish of which, when he was a child, his father had pastoral charge. 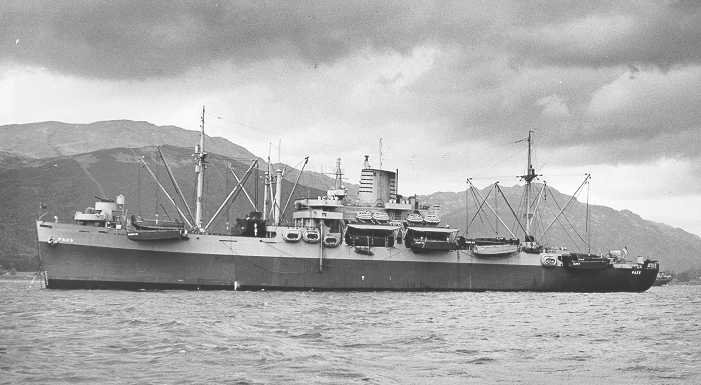 * He was one of a band of young patriots, who, in imitation of those of Massachusetts, styled themselves " Sons of Liberty." They opposed the operation of the Stamp Act in every form, and even went so far as to assault the Stamp Offices, and destroy the Stamps.

** These committees of correspondence constituted a powerful agent in the great work of the Revolution. Their conception was simultaneous in Massachusetts and Virginia, and both States claim the honor of priority. At first these committees were confined to the larger cities, but very speedily every village and hamlet had its auxiliary committees, and the high moral tone evinced by the Chiefs, ran through all the gradations, from the polished committees appointed by Colonial Assemblies, to the rustic, yet not the least patriotic ones of the interior towns ; and through these made an impression upon the whole American people. Thus the patriot heart of America, at this crisis, (1773,) beat as with one pulsation, and the public mind was fully prepared to act with promptness and decision when circumstances should call for action.— "1776," page 105.

*** He was chairman of a committee appointed by Congress to act in relation to those Americans who gave " aid and comfort to the enemy;" and it was his painful duty to recommend the arrest and imprisonment of various persons of this class, among whom were several wealthy Quakers of Philadelphia. An instance of his fearlessness in the performance of his duty, may be properly mentioned here. During the summer of 1776, Reverend Doctor Zubly was a delegate in Congress from Georgia. By some means Mr. Chase discovered that he was in secret correspondence with the royal governor of Georgia. He immediately rose in his place and denounced Doctor Zubly as a traitor, before all the members of the House. Zubly fled, and was pursued, but without success.

****Mr. Chase had moved from Annapolis to Baltimore, on the urgent solicitation of Colonel Howard, one of the largest property holders in the vicinity of that city. He offered to Mr. Chase one full square for city building lots, if he would make Baltimore his residence. The offer was accepted, the property was conveyed to him, and now, being within the city, is very valuable. It is in the possession of the descendants of Judge Chase.

***** His political and personal opponents procured his impeachment in 1804, for malconduct on the bench. He was tried and honorably acquitted, to the shame and confusion of his enemies.

******We cannot forbear relating an instance in which this characteristic was displayed. Being on a visit to Baltimore, about the close of the Revolution, curiosity led him to a debating society, where he was struck by the eloquence of a young man, a druggist's clerk. He ascertained his name, sought an interview, and advised him to study law. The youth stated frankly that his poverty was an insuperable impediment in the way. Mr. Chase at once offered him a seat at his table and free access to his extensive library. The young man gratefully accepted the kind offer, went through a course of legal studies, and was admitted to the bar, after passing an examination with distinguished ability. That young man was William Pinkney, afterward Attorney General of the United States, and minister for the same at the Court of Great Britain.