William Ellery, the colleague of Stephen Hopkins, of Rhode Island, in the Continental Congress of 1776, was born at Newport, on the twenty-second of December, 1727.  His father paid particular attention to his early education, and when qualified, he placed him in Harvard College, where he was distinguished as a close student, particularly of the Greek and Latin languages. 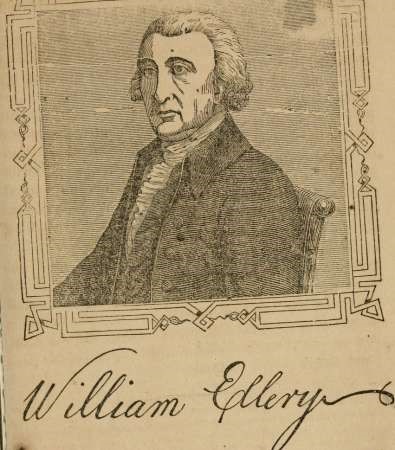 He graduated in 1747, at the age of twenty years, with the most honorable commendations of the faculty. He chose the profession of the law as a business, and when he had completed his studies, he commenced practice in Newport, then one of the most nourishing places in the British American Colonies.

For twenty years, Mr. Ellery practised law successfully, and acquired a fortune. When the troubles of the Revolution began, and, as an active patriot,1 he enjoyed the entire confidence of his fellow-citizens—he was called into public service. Rhode Island, although not so much oppressed as Massachusetts and New York at the beginning, was all alive with sympathy; and the burning of the Gaspee,2 in Providence Bay, in 1772, and the formal withdrawal of the allegiance of the Province from the British crown, by an act of her legislature, as early as May, 1776, are an evidence of the deep, patriotic feeling with which her people were imbued. She promptly responded to the call for a general Congress, and Stephen Hopkins and William Ellery were sent as delegates.

Mr. Ellery was a very active member of Congress, and on the second day of August, 1776, he signed the Declaration of Independence.

In 1778, Mr. Ellery left Congress for a few weeks, and repaired to Rhode Island, to assist in a plan to drive the British from the island.3 It proved abortive, and many of the inhabitants were reduced to great distress. Mt. Ellery exerted his influence in Congress, successfully, for their relief. About the same time he was one of a committee to arrange some difficulties in which Silas Deane, and other commissioners sent to Europe, were involved.4 He was also a member of another committee to arrange some difficult matters connected with the admiralty courts. In each capacity, his wisdom and sound discretion made him successful.

In 1782, Mr. Ellery was designated by Congress to communicate to Major General Greene, their estimate of his valuable services in the Southern Campaigns. In 1784, he was one of a committee to whom the definitive Treaty of Peace with Great Britain was referred. At this time, he was a judge of the Supreme Court of Rhode Island. In connection with Rufus King, of New York, he made strong efforts in 1785, to have slavery in the United States abolished. After the new constitution was adopted in 1788, and the new government was put in operation, he was appointed collector for the port of Newport, which office he retained until his death, which occurred on the fifteenth of February, 1820, in the seventy-third year of his age.5 As a patriot and a Christian, his name will ever be revered.

1The active patriotism of Mr. Ellery excited the ire of the British, and when Newport was taken possession of by the enemy they burnt Mr. Ellery's house, and nearly all of his property was destroyed.

2The Gaspee, a British armed vessel, was, iu 1772, placed in Providence harbor for the purpose of enforcing the revenue laws. The commander, like another Gesler, demanded the obeisance of every merchant vessel that entered, by lowering their flags. One vessel refused, and the Gaspee gave chase. The merchantman so manoeuvred as to cause the Gaspee to run aground, and before she could be got off, she was boarded at night by the crews of several boats from ' Providence, and all on board were made prisoners and sent ashore; after which the vessel was set on fire, and burned to the water's edge.

3Rhode Island was taken possession of by the British in 1776 on the very day that Washington crossed the Delaware. The British troops were commanded by Sir Henry Clinton, and the squadron by Sir Peter Parker. Rhode Island remained in possession of the enemy three years.

4Thomas Paine and others charged Mr. Deane with the crime of prostituting his official station to selfish purposes. The investigation proved the falsity of the charge, yet it was apparent that Mr. Deane, in his zeal, had been very injudicious, and therefore he was not again sent abroad.

5He was always fond of reading the classics in the Latin and Greek languages. He perused Tully's Offices on the morning of his death, while sitting in a chair. He soon afterward commenced reading Cicero, when his attendants discovered that he was dead, but still holding the book in his hand.