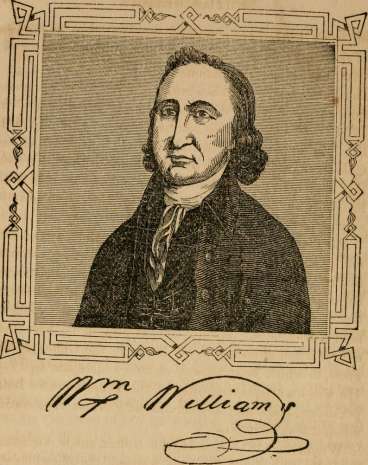 Wales was the place of nativity of the ancestors of William Williams. They emigrated to America in 1630, and settled at Roxbury, in Massachusetts. His grandfather and father were both ministers of the gospel, and the latter was for more than half a century pastor of a Congregational Society, in Lebanon, Connecticut, where the object of this brief sketch was born on the eighteenth of April, 1731. He entered Harvard College at the age of sixteen years, and at twenty he graduated with honorable distinction." He then commenced theological studies with his father; but the agitations of the French War attracted his attention, and in 1754 he accompanied his relative, Colonel Ephraim Williams, in an expedition to Lake George, during which the Colonel was killed. He returned home with settled feelings of dislike toward the British officers in general, who haughtily regarded the colonists as inferior men, and deserving of but little of their sympathy.

He abandoned the study of theology, and entered into mercantile pursuits in Lebanon. At the age of twenty-five he was chosen town clerk, which office he held nearly half a century. He was soon afterward chosen a member of the Connecticut Assembly, and forty-five years he held a seat there. He was always present at its sessions, except when attending to his duties in the General Congress, to which body he was elected a delegate in 1775. He was an ardent supporter of the proposition for Independence, and cheerfully signed the glorious Declaration when it was adopted.

When, in 1781, Arnold, the traitor, made an attack upon New London,1 Williams, who held the office of colonel of militia, hearing of the event, mounted his horse and rode twenty-three miles in three hours, but arrived only in time to see the town wrapped in flames.

Mr. Williams was a member of the State Convention of Connecticut, that decided upon the adoption of the present Constitution of the United States, and voted in favor of it. His constituents were opposed to the measure, but it was not long before they discovered their error, and applauded his firmness.

In 1804, Colonel Williams declined a re-election to the Connecticut Assembly, and withdrew entirely from public life. His life and fortune2 were both devoted to his country, and he went into domestic retirement with the love and veneration of his countrymen attending him. He was married in 1772, to Mary, the daughter of Governor Trumbull, of Connecticut, and the excellences of his character greatly endeared him to his family. In 1810 he lost his eldest son. This event powerfully shocked his already infirm constitution, and he never recovered from it. His health gradually declined ; and a short time before his death he was overcome with stupor. Having laid perfectly silent for four days, he suddenly called, with a clear voice, upon his departed son to attend his dying father to the world of spirits, and then expired. He died on the second day of August, 1811, at the patriarchal age of eighty-one years.

1 Norwich, fourteen miles from New London, was the native place of Arnold. On the expedition alluded to, he first attacked Fort Trumbull, at the entrance of the Thames, on which New London stands. The garrison evacuated the Fort at his approach, and, in imitation of the infamous Governor Tryon, of New York, he proceeded to lay the town in ashes. Arnold's men were chiefly tories. On the same day, Fort Griswold, opposite, was attacked, and after its surrender, all but about forty of the garrison were butchered in cold blood.

2 Many instances are related of the personal sacrifices of Mr. Williams for his country's good. At the commencement of the war he devoted himself to his country's service, and for that purpose he closed his mercantile business, so as not to have any embarrassments. In 1779, when the people had lost all confidence in the final redemption of the continental paper money, and it could not procure supplies for the army, Mr. Williams generously exchanged two thousand dollars in specie for it, and of course lost nearly the whole amount. The Count De Rochambeau, with a French army, arrived at Newport during the summer of 1780, as allies to the Americans, but they did not enter into the service until the next year, and remained encamped in New England. Louzon, one of Rochambeau's cavalry officers, encamped during the winter with his legion at Lebanon, and Mr. Williams, in order to allow the officers comfortable quarters, relinquished his own house to them, and moved his family to another. Such was the self-denial of the Fathers of our Republic, and such the noble examples they present.