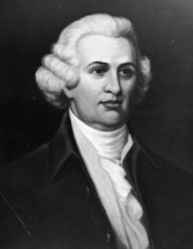 William Hooper
Signer of the
Declaration of Independence

The Address to the Assembly of Jamaica was passed by the Second Continental Congress on July 25, 1775. It was authored by William Hooper, a delegate from North Carolina who later signed the Declaration of Independence. The address relates America's grievances towards Great Britain and seeks to explain to Jamaica why the Americans had cut off all trade with the island.

The First Continental Congress had passed a resolution banning all trade with any British colonies or ships, in an effort to get Britain to back down from its tyrannical ways. Jamaica and other British Caribbean colonies were distressed because the American colonies were one of their primary markets. Jamaica's sugar plantations supplied the thirteen colonies with sugar. In this address, the Congress advises Jamaica to plant wheat, instead, for its own consumption. Congress also acknowledges the Jamaicans' effort to intercede on their behalf with Great Britain and appeals to the Jamaicans' own sense of freedom and liberty in an effort to get them to understand the Americans' position.

Address to the Assembly of Jamaica

MR. SPEAKER AND GENTLEMEN OF THE ASSEMBLY OF JAMAICA, We would think ourselves deficient in our duty, if we suffered this Congress to pass over, without expressing our esteem for the assembly of Jamaica.

Whoever attends to the conduct of those who have been entrusted with the administration of the British affairs, during these last twelve years, will discover in it, a deliberate plan to destroy, in every part of the empire, the free constitution, for which Britain has been so long and so justly famed. With a dexterity, artful and wicked, they have varied the modes of attack, according to the different characters and circumstances of those whom they meant to reduce. In the East Indies, where the effeminacy of the inhabitants promised an easy conquest, they thought it unnecessary to veil their tyrannic principles under the thinnest disguise. Without deigning even to pretend a justification of their conduct, they sacrificed the lives of millions to the gratification of their insatiable avarice and lust of power. In Britain, where the maxims of freedom were still known, but where luxury and dissipation had diminished the wonted reverence for them, the attack has been carried on in a more secret and indirect manner: Corruption has been employed to undermine them. The Americans are not enervated by effeminacy, like the inhabitants of India; nor debauched by luxury, like those of Great Britain: It was, therefore, judged improper to assail them by bribery, or by undisguised force. Plausible systems were formed; specious presences were made: All the arts of sophistry were tried to shew that the British ministry had by law a right to enslave us. The first and best maxims of the constitution, venerable to Britons and to Americans, were perverted and profaned. The power of parliament, derived from the people, to bind the people, was extended over those from whom it was never derived. It is asserted that a standing army may be constitutionally kept among us, without our consent. Those principles, dishonorable to those who adopted them, and destructive to those to whom they were applied, were nevertheless carried into execution by the foes of liberty and of mankind. Acts of parliament, ruinous to America, and unserviceable to Britain, were made to bind us; armies, maintained by the parliament, were sent over to secure their operation. The power, however, and the cunning of our adversaries, were alike unsuccessful. We refused to their parliaments an obedience, which our judgments disapproved of: We refused to their armies a submission, which spirits unaccustomed to slavery, could not brook.

But while we spurned a disgraceful subjection, we were far from running into rash or seditious measures of opposition. Filled with sentiments of loyalty to our sovereign, and of affection and respect for our fellow subjects in Britain, we petitioned, we supplicated, we expostulated: Our prayers were rejected; our remonstrances were disregarded; our grievances were accumulated. All this did not provoke us to violence.

An appeal to the justice and humanity of those who had injured us, and who were bound to redress our injuries, was ineffectual: we next resolved to make an appeal to their interests, though by doing so, we knew we must sacrifice our own, and (which gave us equal uneasiness) that of our friends, who had never offended us, and who were connected with us by a sympathy of feelings, under oppressions similar to our own. We resolved to give up our commerce that we might preserve our liberty. We flattered ourselves, that when, by withdrawing our commercial intercourse with Britain, which we had an undoubted right either to withdraw or continue, her trade should be diminished, her revenues impaired, and her manufactures unemployed, our ministerial foes would be induced by interest, or compelled by necessity, to depart from the plan of tyranny which they had so long pursued, and to substitute in its place, a system more compatible with the freedom of America, and justice of Britain. That this scheme of non-importation and non-exportation might be productive of the desired effects, we were obliged to include the islands in it. From this necessity, and from this necessity alone, has our conduct towards them proceeded. By converting your sugar plantations into fields of grain, you can supply yourselves with the necessaries of life: While the present unhappy struggle shall continue, we cannot do more.

But why should we make any apology to the patriotic assembly of Jamaica, who knows so well the value of liberty; who are so sensible of the extreme danger to which ours is exposed; and who foresee how certainly the destruction of ours must be followed by the destruction of their own?

We receive uncommon pleasure from observing the principles of our righteous opposition distinguished by your approbation: We feel the warmest gratitude for your pathetic mediation in our behalf with the crown. It was indeed unavailing - but are you to blame? Mournful experience tells us that petitions are often rejected, while the sentiments and conduct of the petitioners entitle what they offer to a happier fate.

That our petitions have been treated with disdain, is now become the smallest part of our complaint: Ministerial insolence is lost in ministerial barbarity. It has, by an exertion peculiarly ingenious, procured those very measures, which it laid us under the hard necessity of pursuing, to be stigmatized in parliament as rebellious: It has employed additional fleets and armies for the infamous purpose of compelling us to abandon them: It has plunged us in all the horrors and calamities of civil war: It has caused the treasure and blood of Britons (formerly shed and expended for far other ends) to be spilt and wasted in the execrable design of spreading slavery over British America: It will not, however, accomplish its aim: In the worst of contingencies, a choice will still be left, which it never can prevent us from making.

The peculiar situation of your island forbids your assistance. But we have your good wishes. From the good wishes of the friends of liberty and mankind, we shall always derive consolation.

Return to top of Address to the Assembly of Jamaica