On this day in history, June 12, 1775, the Battle of Machias is the first naval battle of the American Revolution. Citizens of Machias, Maine (then part of Massachusetts) captured the armed British schooner HMS Margaretta when it threatened their town.

After the opening shots of the Revolution at the Battles of Lexington and Concord on April 19, 1775, American militia laid siege to the city of Boston, trapping the British army inside the city. British General Thomas Gage was forced to import supplies by sea since all land access was cut off. Loyalist merchant Ichabod Jones made a deal with Gage to sail to Machias, on the far northeastern part of present day Maine, to bring back a load of lumber to Gage, who needed it to build barracks for arriving troops. 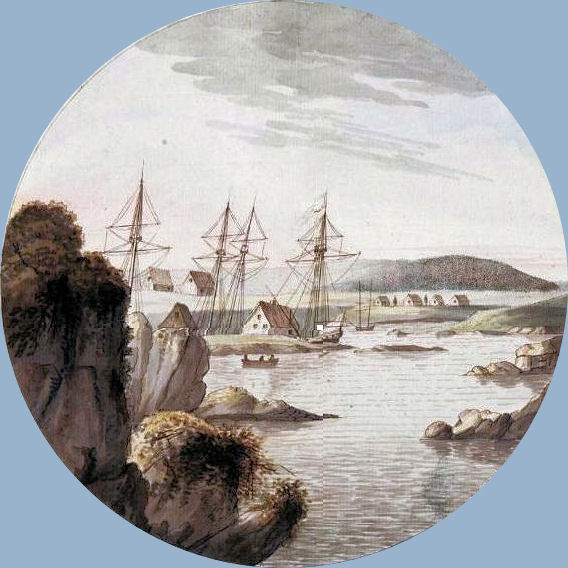 Jones' ships Polly and Unity left Boston, accompanied by the HMS Margaretta for security, arriving at Machias on June 2. The Polly and Unity went straight up the bay to Machias, while the Margaretta, under command of Midshipman James Moore, stopped to retrieve the guns from the wreck of the HMS Halifax, which had run aground in the bay earlier in the year.

When Jones arrived in the town, he explained to the citizens that he wanted to exchange his load of flour and other goods for a shipment of lumber. The citizens met on the 6th and voted against the transaction, not wanting to aid the British. Jones then called on Moore who brought the Margaretta within firing distance of the town. This caused alarm in the town and they voted again, this time to acquiesce in the transaction with Jones. 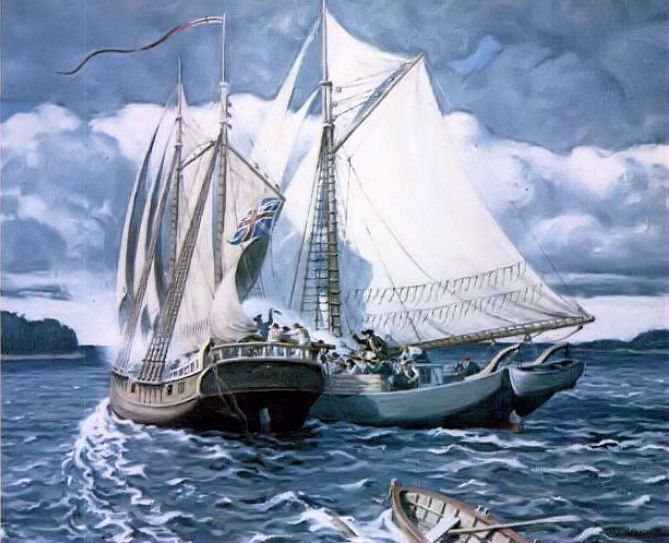 Sloop Unity and the Schooner Margaretta by Robert L. Lambdin

Jones, however, refused to do business with anyone who had previously voted against the deal, which made many citizens angry. Colonel Benjamin Foster, leader of the local militia, took matters into his own hands. On June 11, the militia attempted to capture Jones and Moore while they attended church. Moore got away to the Margaretta, but Jones ran into the woods where he hid for two days.

Meanwhile, Foster and the militia boarded the Unity and the Polly and demanded that Moore surrender the Margaretta. After some brief gunfire exchange, Moore sailed downriver and tried to get away. While running, his main boom and gaff were broken in high winds removing his ability to navigate. At this point, he commandeered another ship and took its boom and mast to replace his own, and also took the ship's captain, Robert Avery, of Norwich, Connecticut, captive.

Back in Machias, the Unity was equipped for battle, along with another ship, the Falmouth Packet and the two ships set out after the Margaretta, under command of Jeremiah O'Brien, a local captain. On June 12th, the much faster Unity overtook the Margaretta and after several attempts, her crew was able to tie the two ships together. Shots were fired and several on both sides were killed, including the captive captain from Norwich. When Moore, captain of the Margaretta, threw several grenades onto the Unity, he was shot in the chest by Samuel Watts. Moore died a few days later from his wounds.

With their captain down, the crew of the Margaretta quickly surrendered. They were later turned over to the Massachusetts Provincial Congress. Machias patriots went on to capture numerous British vessels during the war and many became part of the Continental Navy. Captain Jeremiah O'Brien served with distinction and has had five US Navy vessels named after him since. The Battle of Machias has the distinction of being the first naval battle of the American Revolution. Machias was later targeted for invasion in 1777, but the mission was a failure and the British failed to take the town.