Button Gwinnett was the son of a Welsh clergyman, the Reverend Samuel Gwinnett, and his English wife Anne. Button was born in Down Hatherley, Gloucestershire in England. The date of his birth is uncertain, but was sometime between 1732 and 1735. He was baptized in St. Catherine's Church in Gloucester on April 10, 1735.

Button received the best education his parent's circumstances would allow and afterward started a small export firm in Bristol. In 1755 he moved to Wolverhampton where he married a local girl, Ann Bourne, in 1757 at the age of 22. In 1762 they emigrated to America.

Button first settled in Charleston, South Carolina, where he started a mercantile business. After about two years, at the age of 28, he moved to Savannah, Georgia, and engaged in general trade. Before long he sold off his trading concerns and purchased a large tract of land on St. Catherine's Island. He established a prosperous plantation and by 1769 was elected to the House of Commons. 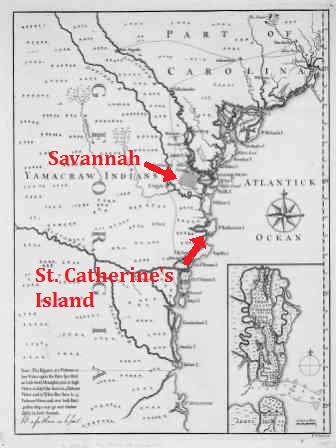 Prior to 1775, Mr. Gwinnett was known to be a patriotic citizen, but he personally believed that it was an impossible task for the Americans to resist Great Britain and succeed. Around this time though, Mr. Gwinnett had a change of heart and began to publicly advocate confronting Britain about her conduct toward the American colonies and securing American rights. As a result, Mr. Gwinnett was elected to attend a Provincial Assembly which he attended on January 20, 1776, at Savannah.

Signing the Declaration of Independence

At the convention, Mr. Gwinnett was appointed commander of Georgia's continental militia, which he declined for party reasons. In April, he was also elected by the Assembly as a delegate to the Continental Congress in Philadelphia, where he first took his seat in May of 1776. He voted for independence on July 2 and for the formal Declaration of Independence on July 4, signing the parchment document on August 2 of that year. Click here to read the text of the actual letter explaining their instructions given to Button Gwinnett and the other Georgia delegates by Georgia's Council of Safety.

After signing the Declaration, Mr. Gwinnett traveled back to Georgia in hopes of being reappointed as leader of the Georgia militia. He was accompanied as far as Virginia by Carter Braxton, a Virginia delegate to Congress and Signer of the Declaration. Mr. Gwinnett carried with him a pamphlet drawn up by John Adams of a proposed State Constitution. The appointment over the militia was given instead to Brigadier General Lachlan McIntosh, a long time political rival of Mr. Gwinnett's.

In October of that year, Mr. Gwinnett was again elected to Congress. Mr. Gwinnett served in the legislature and in February 1777 was a delegate to a state convention that met in Savannah to create a constitution for the new state of Georgia. He wrote the first draft of the new constitution, largely using the pamphlet from John Adams as an outline. Mr. Gwinnett became the Speaker of the Georgia Assembly and held that position until the death of the first Georgia Governor, Archibald Bulloch. The Assembly had adjourned in February and given control over affairs to the Council of Safety which was led by Mr. Bulloch. The Assembly's Executive Council elevated Mr. Gwinnett to the office of President and Commander in Chief of Georgia's militia on March 4, 1777.

The Tragic Duel Between
Button Gwinnett and Lachlan McIntosh

As the new head of government and of Georgia's military, Gov. Gwinnett began to use his position to thwart the efforts of Brigadier General McIntosh. McIntosh was appointed by the Continental Congress over Georgia's Continental Battalion, but as supreme governor of Georgia, Gwinnett thought he should be in command of it himself. Gwinnett took an active role over the continental army in Georgia which caused dissension in the ranks and subversion towards General McIntosh's leadership by certain officers and soldiers under his command. 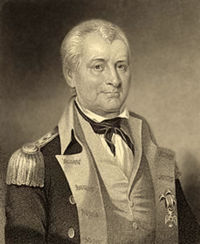 General McIntosh had planned an expedition into Eastern Florida to secure Georgia's southern border, but Governor Gwinnett took over the planning of the expedition and would have led the troops himself, but was prevented at the last minute from going because he had to call the Provincial Assembly together to form the new government. Instead, he appointed one of McIntosh's subordinates as the commander of the expedition.

The expedition was an entire failure and probably contributed to the failure of Gwinnett's bid for governor in May of that year. Gwinnett was charged with malfeasance for the disastrous Florida expedition, but was cleared of all wrongdoing. Unfortunately, General McIntosh publicly denounced Mr. Gwinnett's failure and treated him contemptuously. The animosity grew to the point that Mr. Gwinnett challenged Gen. McIntosh to a duel in an effort to restore his honor.

They met at the small town of Thunderbolt, near Savannah, and fought on May 16, 1777, at a distance of only 12 feet. Both were severely wounded, Gwinnett mortally. He died three days later from gangrene which he contracted from the shattered bone in his leg. Lachlan McIntosh survived and continued to serve his country. Mr. Gwinnett died on May 19, 1777 at the age of 45. His grave is believed to be in the Old Colonial Cemetery, later called Colonial Park, in Savannah, Georgia.

For anyone interested in autograph collecting, it is worthy to note that Button Gwinnett's signature is considered among the most valuable of historical autographs in the world, valued only behind the likes of Julius Caesar and William Shakespeare. Gwinnett's signature is by far the most valuable American autograph. A single copy sold for $722,000 in 2010. This is due to collectors attempting to obtain a complete set of the autographs of all 56 signers of the Declaration of Independence, as well as the Gwinnett signature being a rarity - only 51 examples of his signature are known to exist, since he was not well known before signing the Declaration and died shortly after.

Do the Button Gwinnett crossword here. All of the answers can be found in the biography above.

Other Georgia Signers of the Declaration of Independence: