In this letter Caroline Purdy, who had assisted her mother, Mary Young Pickersgill in creating the original Star Spangled Banner Flag, writes to Georgiana Appleton, whose father had commissioned the flag's construction. The flag remained in the hands of the Appleton family for many years after the War of 1812, in which it flew at the Battle of Baltimore and was the inspiration for Francis Scott Key's song, the Star Spangled Banner. 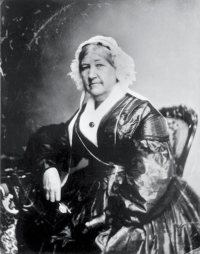 By this time, Caroline Purdy was very old and quite poor. She had heard Appleton was going to allow the flag to be displayed for the United States' 100th anniversary celebrations. She asks if she could attach a card to the flag explaining her connection to the flag in hopes that some patriotic people would help her with her financial needs.

This letter is significant to historians because it makes several remarks about the Star Spangled Banner Flag's creation.

You can learn more about the history of the Star Spangled Banner Flag here.

I have lately seen in the newspapers that the noted flag which waved over Fort McHenry in the bombardment of Baltimore: is in your possession, and is to be sent to the Centennial.

I take the liberty to send you a few particulars about the "Flag." It was made by my mother, Mrs. Mary Pickersgill, and I assisted her. My grandmother, Rebecca Young made the first flag of the Revolution, (under General Washington's direction) and for this reason my mother was selected by Commo. Barney and George Stricker, (family connections), to make this "Star Spangled Banner" which she did, being an exceedingly patriotic woman. 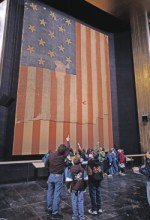 The flag being so very large, mother was obliged to obtain permission from the proprietors of Claggetts brewery which was in our neighborhood, to spread it out in their malt house; and I remember seeing my mother down on the floor, placing the stars: after the completion of the flag, she superintended the topping of it, having it fastened in the most secure manner to prevent its being torn away by (cannon) balls: the wisdom of her precaution was shown during the engagement: many shots piercing it, but it still remained firm to the staff. Your father (Col. Armistead) declared that no one but the maker of the flag should mend it, and requested that the rents should merely be bound around.

The flag contained, I think, four hundred yards of bunting, and my mother worked many nights until 12 o'clock to complete it in the given time.

I would also state, that many of my ancestors were in the Revolution. My grandfather William Young was a captain in the war: my uncle Col. Flower was "Commissary General of Military stores," and Colonel of "Artillery" - these both lost their lives by camp fever; I had another uncle taken prisoner by the British, and whipped through the fleet for attempting to escape: and my father in-law, Henry Purdy, served through the war.

For my character and position I could refer to you Miss Margaret Purviance, or any other reference you would require; I could further recall myself to your recollection, as I was a Manager of the "Aged Woman's" Home at the same time you were, and was particularly fascinated with you, (both being Episcopalians) in the care of a Mrs. Jefferson, daughter of Ms. Whipple a signer of the Declaration of Independence.

Your kindness and prompt attention to her induced me to present my case to you.

I am widowed and childless, and now find myself, in my seventy sixth year, in feeble health, and with the barest pittance of support. My friends here in Balto.- have suggested that if these particulars, met with your approbation, and were placed on a card attached to the flag, they might excite among patriotic people, some compassion for my helpless condition; but I would leave this matter entirely up to your judgement.

I have not been able to write, on account of not having the use of my right arm, but thought it was better to put the signature in my own hand with kind regards. I trust your sympathy.