The Cowpens Flag was allegedly carried by William Batchelor of the 3rd Maryland Regiment at the Battle of Cowpens in South Carolina on January 17, 1781. The Battle was a turning point in the reconquest of South Carolina from the British by the Americans. There is some controversy about whether the flag actually appeared at the Battle of Cowpens at all. Some historians believe the flag was used in the War of 1812 instead. 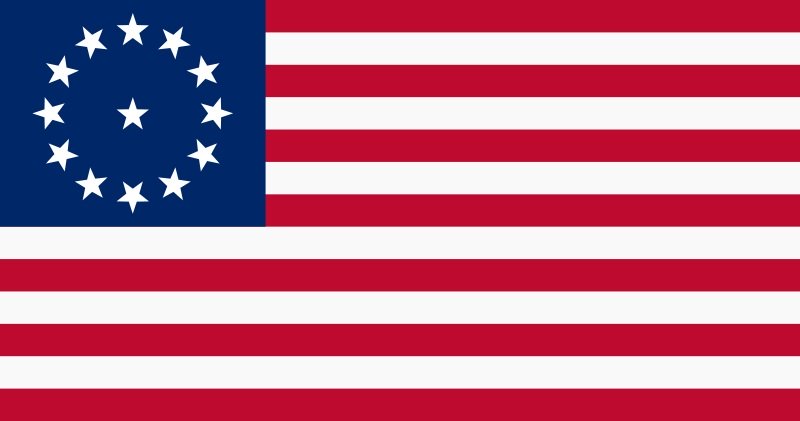 The Cowpens Flag is a variation of the 13 Star Flag that meets the definition of the Flag Resolution of 1777, which stated:

"Resolved, That the flag of the United States be thirteen stripes, alternate red and white; that the union be thirteen stars, white in a blue field, representing a new Constellation."

The Flag Resolution made permanent the use of stars on a blue field for the US Flag, but it did not specify how the stars were to be laid out or how many points they should have. Consequently, many different flag designs were used, all fitting the official description. Some had stars of six, seven or eight points. Some had the stars arranged in circles, squares, in random places or other patterns. By 1795, when the first 2 new states were added and the stars and stripes were increased to 15, the familiar arrangement with the stars in rows was firmly established. More about the 13 Star Flag variations at the 13 Star Flag page.

The Cowpens Flag used 13 red and white alternating stripes with twelve of the thirteen stars in a circle with the thirteenth star in the middle. Due to the flag being used by the 3rd Maryland Regiment, this layout is sometimes called the "3rd Maryland design." 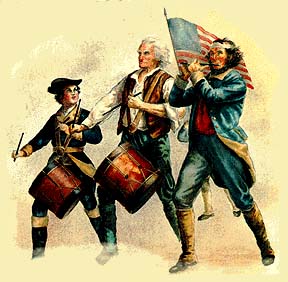 Spirit of '76 by Archibald MacNeal Willard

According to legend, the Cowpens Flag was carried into the Battle of Cowpens in South Carolina in January, 1781. It was carried by William Batchelor who had been part of the 3rd Maryland Regiment. The "cowpens" was a local term for an area where cattle were grazed a few miles north of the current town of Cowpens, South Carolina.

In the battle, General Daniel Morgan was joined by troops from Virginia, North and South Carolina and Georgia do deal a decisive defeat to Lieutenant Colonel Banastre Tarleton. The villain portrayed by Jason Isaacs in the Mel Gibson movie, The Patriot, is based on Tarleton. The battle helped turn the tide against Britain's southern campaign and has sometimes been called the most brilliant military victory ever fought on American soil.

This battle led to another decisive defeat at Guilford Courthouse when General Charles Cornwallis went to the rescue of Tarleton's men. The two defeats together led to the confinement of the British troops along the coast and to Cornwallis' eventual surrender to George Washington at Yorktown in October.

The Cowpens Flag remained in the Batchelor family until they gave it to the Society for the War of 1812 in 1894.

It was featured in the famous painting The Spirit of '76, also known as Yankee Doodle Dandee, by artist Archibald MacNeal Willard around 1875 for America's centennial celebration. Some people mistakenly believe the flag in the painting is the Betsy Ross Flag, with all 13 stars in the circle, but if you look closely you can see the 13th star in the center.

For a bit of fun - in the battle scene at the end of the movie The Patriot, which you may have seen, Mel Gibson's character carries the 13 star Betsy Ross Flag with all 13 stars in a circle. The scene is actually a composite of the Battle of Cowpens and the Battle of Guilford Courthouse, with elements of both mixed together. All they had to do to get the movie more historically accurate was to have Mel Gibson carry a Cowpens Flag!

The Truth of the Cowpens Flag

Eventually, the flag's origin was questioned and the Society for the War of 1812 appointed J. Appleton Wilson, a Maryland architect and historian to study its history. Wilson determined that the flag was not from the Revolutionary War era, but instead was carried by Joshua Batchelor at the Battle of North Point in the War of 1812. This is where the original flag received its many bullet holes. Because of this, the flag is also sometimes called the North Point Flag, but it is still more commonly called the Cowpens Flag.

After discovering the truth, the Society of the War of 1812 used the flag in anniversary ceremonies to mark the Battle of North Point. The flag was also used in conjunction with Revolutionary War era ceremonies, including the US tour of General Lafayette in 1824.

The original flag was eventually given to the State of Maryland where it was displayed at the State House in Anapolis until the 1980s, at which time it was put into storage for preservation. It is currently housed at the Maryland Archives.

In the 1970s, a joint study by the Maryland State Archives and the Smithsonian Institution concluded that the Cowpens Flag was not even manufactured until the mid-1800s based on its materials and construction. If this is the case, the flag was not even flown at the War of 1812 and its origin is uncertain, though it clearly came from the Batchelor family.

Many agree that the flag was carried by the 3rd Maryland Regiment, but some have questioned this as well because no American regiments were authorized to carry the stars and stripes until the 1800s. The flag was not yet the national symbol it has become today, nor was it always carried by army troops. It was considered to be a navy flag. The original Flag Resolution was submitted by the Marine Committee and the flag was flown mostly on ships. More about this at the 13 Star Flag page. Remarkably, the official authorization to carry the US flag by combat units was not granted until 1834 for artillery units, 1841 for infantry and 1862 for cavalry.

In addition to not being authorized for army use, historians believe the first American flag made in Maryland was not made until 1782, a year after the Battle of Cowpens.

Other historians have stated that many Continental Army regiments made their own flags whether they were "authorized" or not and that the 3rd Maryland Regiment clearly had created its own flag and carried it into the Battle of Cowpens.

Some have pointed out that the 3rd Maryland Regiment could not have been at the Battle of Cowpens at all because the regiment was disbanded after the devastating defeat at the Battle of Camden, South Carolina. While this is true, some historians have pointed out that the members of the 3rd Maryland were then assigned to other regiments, taking their flag with them.