The Earl of Hillsborough circular letter to American governors was sent to each colony in 1768 in response to the growing threat of rebellion in the colonies. The Townshend Acts of 1767 had added new taxes and increased regulations on imports into the colonies. The colonists responded with rioting, protesting and boycotts of English goods.

In early 1768, the colony of Massachusetts sent a circular letter written by Samuel Adams to the other colonies, asking them to join in pressuring Parliament to repeal recent Acts that were deemed to be illegal and immoral, including taxation without representation, the practice of the Crown paying the salaries of colonial officials independent of the people of the colonies, the multiplication of royal customs officers in America and the requirement of the colonists to pay for housing, food and supplies for British troops stationed in America. 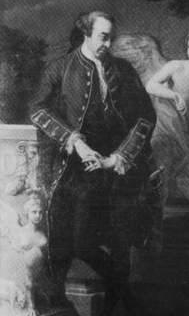 Wills Hill 1st Marquis of Downshire and Earl of Hillsborough

As soon as the letters were received, the other colonies began issuing similar resolutions, writing letters to the King demanding change and doing various other acts to resist the Townshend Acts and other acts of Parliament.

Wills Hill, the Earl of Hillsborough, was appointed to the office of Colonial Secretary in February 1768. This position was created to deal with the growing rebellion in the colonies. Hillsborough saw the Massachusetts Circular letter as a threat that would spread the rebellion to other colonies and sought to stop it.

He sent this circular letter to each royal governor instructing them to disband their local colonial assemblies if the assembly in their colony expressed support for the Massachusetts Circular letter.

Most of the colonies did end up expressing their support in various ways and, in accord with Hillsborough's letter, disbanded the local governments. This only served to enflame the colonists even more. You can read the text of the Earl of Hillsborough Circular letter below.

I have his Majesty's commands to transmit to you the inclosed Copy of a letter from the Speaker of the House of Representatives of the Colony of Massachusetts Bay addressed by order of that House to the Speaker of the Assembly of each Colony upon the Continent of No America.

As his Majesty considers this measure to be of a most dangerous and factious Tendency calculated to inflame the minds of his good subjects in the Colonies to promote an unwarrantable combination and to excite and encourage an open opposition to and denial of the authority of Parliament and to subvert the true principles of the Constitution, It is his Majesty's Pleasure that you should immedidiately upon the Receipt hereof exert your utmost influence to defeat this flagitious attempt to disturb the Public Peace by prevailing upon the Assembly of your province to take no Notice of it which will be treating it with the contempt it deserves.

The repeated Proofs which have been given by the Assembly of—of their Reverence and respect for the Laws and of their faithful attachment to the Constitution leave little room in his Majesty's Breast to doubt of their shewing a proper resentment of this unjustifiable attempt to revive those distractions which have operated so fatally to the prejudice of this Kingdom and the Colonies and accordingly his Majesty has the fullest confidence in their affections But if notwithstanding these expectations and your most earnest endeavours there should appear in the Assembly of your Province a disposition to receive or give any countenance to this seditious Paper it will be your duty to prevent any proceeding upon it by an immediate Prorogation or dissolution.

You can also read the text of each of the Townshend Acts here: