This Francis Hopkinson letter to Congress, was written by Francis Hopkinson, a delegate to the Continental Congress from New Jersey and signer of the Declaration of Independence, in June, 1780. The letter is a revision of a letter he wrote a few days earlier asking for payment in return for designing various items for Congress including the Continental Currency, the Seal for the Board of the Treasury, the Seal for the Board of the Admiralty, the American flag and other items. 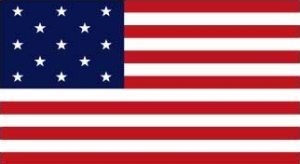 The two letters are significant in studying who created the first American flag because they provide the only documentary evidence of anyone claiming to have created the flag. Some scholars attribute the first flag to Hopkinson, while others discount the claim, partly because the bill was rejected by Congress and partly because Hopkinson resubmitted this second bill a few days later with seemingly contradictory wording.

You will find links to Hopkinson's first letter and to more information about the history of the flag at the bottom of this page.

Dr. The United States of America to Francis Hopkinson.

To Sundry Devices Drawings, Mottos, &C for the public use viz:

The Great Naval Flag of the United States.

Seven Devices with Mottos for former Emissions of the Continental Currency.

The Seal of the Board of Admiralty.

A Seal for the Shipping Papers of the United States.

Seal of the Board of the Treasury

Ornaments, Borders and Checks for the Loan Office, Certificates.

Ditto for the Bills of Exchange on Spain & Holland.

Ditto for the Continental Currency now in the Press.

The Great Seal of the United States with a Reverse.

Devices & Ornaments for the Commissions in the Navy of the United States now in Hand and not completed.