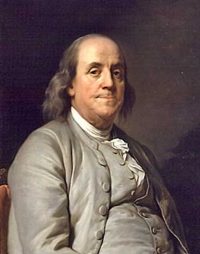 "1. Temperance... drink not to elevation; 2. Silence... avoid trifling conversation; 3. Order... Let all your things have their places; 4. Resolution... perform without fail what you resolve; 5. Frugality... i.e. waste nothing; 6. Industry... Lose no time, be always employ'd; 7. Sincerity... Use no hurtful deceit, think innocently; 8. Justice... Wrong none by doing injuries; 9. Moderation... Avoid extremes, forbear resenting; 10. Cleanliness... Tolerate no uncleanliness in body; 11. Tranquility... Be not disturbed at trifles; 12. Chastity; 13. Humility... Imitate Jesus." - Autobiography, 1789

"O powerful goodness! Bountiful Father! Merciful Guide! Increase in me that wisdom which discovers my truest interest. Strengthen my resolution to perform what that wisdom dictates. Accept my kind offices to thy other children as the only return in my power for thy continual favours to me." - Autobiography, his daily prayer, 1789

"I had been religiously educated as a Presbyterian; and though some of the dogmas of that persuasion, such as the eternal decrees of God, election, reprobation, etc., appeared to me unintelligible, others doubtful, and I early absented myself from the public assemblies of the sect, Sunday being my studying day, I was never without religious principles.

I never doubted, for instance, the existence of the Deity; that he made the world, and governed it by his Providence; that the most acceptable service of God was the doing good to man; that our souls are immortal; and that all crime will be punished, and virtue rewarded, either here or hereafter. These I esteemed the essentials of every religion; and, being to be found in all the religions we had in our country, I respected them all, though with different degrees of respect, as I found them more or less mixed with other articles, which without any tendency to inspire, promote, or co nfirm morality, served principally to divide us, and make us unfriendly to one another.

This respect of all... induced me to avoid all discourse that might tend to lessen the good opinion another might have of his own religion; and as our province increased in people, and new places of worship were continually wanted, and generally erected by voluntary contribution, my mite for such propose, whatever might bane the sect, was never refused.

Though I seldom attended any public worship, I had still an opinion of its propriety, and of its utility when rightly conducted, and I regularly paid my annual subscription for the support of the only Presbyterian minister or meeting we had in Philadelphia. He used to visit me sometimes as a friend, and admonish me to attend his administration." - Autobiography, 1789

"Human felicity is produc'd not so much by great pieces of good fortune that seldom happen, as by little advantages that occur every day." - Autobiography, 1789

"My parents had early given me religious impressions, and brought me through my childhood piously in the Dissenting way. But I was scarce fifteen, when, after doubting by turns of several points, as I found them disputed in the different books I read, I began to doubt of Revelation itself. Some books against Deism fell into my hands; they were said to be the substance of sermons preached at Boyle's Lectures. It happened that they wrought an effect on me quite contrary to what was intended by them; for the arguments of the Deists, which were quoted to be refuted, appeared to me much stronger than the refutations; in short, I soon became a thorough Deist." - Autobiography, 1789

"So convenient a thing it is to be a reasonable creature, since it enables one to find or make a reason for everything one has a mind to do." - Autobiography, 1789

"Search others for their virtues, thy self for thy vices; Keep your eyes open before marriage, half shut afterwards; My father convinced me that nothing was useful which was not honest; Freedom is not a gift bestowed upon us by other men, but a right that belongs to us by the laws of God and nature; Virtue alone is sufficient to make a man great, glorious and happy; Let the fair sex be assured that I shall always treat them and their affairs with the utmost decency and respect; Self-denial is really the highest self-gratification; Beware of little expenses; Remember Job suffered and was afterwards prosperous; I never doubted the existence of the Deity, that he made the world, and governed it by His Providence; The event God only knows; Good wives and good plantations are made by good husbands; Hope and faith may be more firmly grounded upon Charity than Charity upon hope and faith; Virtue is not secure until its practice has become habitual; Nothing is so likely to make a man's fortune as virtue; Without virtue man can have no happiness; The pleasures of this world are rather from God's goodness than our own merit; Contrary habits must be broken, and good ones acquired and established, before we can have any dependence on a steady, uniform rectitude of conduct; Let no pleasure tempt thee, no profit allure thee, no ambition corrupt thee, no example sway thee, no persuasion move thee to do anything which thou knowest to be evil, so thou shalt live jollily, for a good conscience is a continual Christmas." - Maxims and Morals, 1789

"Here is my Creed. I believe in one God, the Creator of the Universe. That He governs it by His Providence. That He ought to be worshipped.

That the most acceptable service we render to Him is in doing good to His other Children. That the soul of Man is immortal, and will be treated with Justice in another Life respecting its conduct in this. These I take to be the fundamental points in all sound Religion, and I regard them as you do in whatever Sect I meet with them.

As to Jesus of Nazareth, my Opinion of whom you particularly desire, I think the System of Morals and his Religion, as he left them to us, is the best the World ever saw, or is likely to see." - Letter to Ezra Stiles, President of Yale University, March 9, 1790

"THE BODY of BENJAMIN FRANKLIN Printer, Like the cover of an old book, Its contents torn out, And stripped of its lettering and gilding Lies here, food for worms; Yet the work itself shall not be lost, For it will (as he believed) appear once more, In a new, And more beautiful edition, Corrected and amended By the AUTHOR" - His self-written Epitaph, April 17, 1790


Learn more about Ben Franklin on our Facts about Benjamin Franklin page.

We have lots more Quotes by Benjamin Franklin for you!

Did you enjoy these Quotes by Benjamin Franklin? Check out these inspirational quotations from some other Founding Fathers