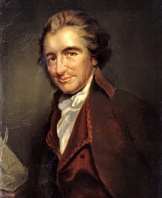 Read Thomas Paine Quotes from his own writings and letters from the years 1775 and 1776. Most of the quotes on this page are from Thomas Paine's pamphlet Common Sense, which helped inspire the Revolutionary War. Common Sense was praised widely by the other Founding Fathers for its instruction on the people's right to liberty. Later on in life, Paine was criticized by the same Founding Fathers for his anti-Christian work The Age of Reason. These Thomas Paine Quotes are listed chronologically and there are links to more after this time period at the bottom of the page.

"From the east to the west blow the trumpet to arms! Through the land let the sound of it flee; Let the far and the near all unite, with a cheer, In defense of our Liberty Tree." -The Liberty Tree, July, 1775

"Arms discourage and keep the invader and plunderer in awe, and preserve order in the world as well as property... Horrid mischief would ensue were the law-abiding deprived of the use of them." - Thoughts on Defensive War, 1775  (This article from which the quote was taken is being questioned by The Thomas Paine National Historical Association - thomaspaine.org.)

"Now is the seedtime of continental union, faith and honor. The least fracture now, will be like a name engraved with the point of a pin on the tender rind of a young oak; the wound would enlarge with the tree, and posterity read in it full grown characters." - Common Sense, January 10, 1776 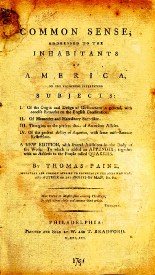 "The reformation was preceded by the discovery of America, as if the Almighty graciously meant to open a sanctuary to the persecuted in future years, when home should afford neither friendship nor safety." - Common Sense, January 10, 1776

"Society in every state is a blessing, but government, even in its best state, is but a necessary evil; in its worst state an intolerable one; for when we suffer or are exposed to the same miseries by a government, which we might expect in a country without government, our calamity is heightened by reflecting that we furnish the means by which we suffer." - Common Sense, January 10, 1776

"Such is the irresistible nature of truth that all it asks, and all it wants, is the liberty of appearing." - Common Sense, January 10, 1776

"As parents, we can have no joy, knowing that this government is not sufficiently lasting to ensure any thing which we may bequeath to posterity: And by a plain method of argument, as we are running the next generation into debt, we ought to do the work of it, otherwise we use them meanly and pitifully. In order to discover the line of our duty rightly, we should take our children in our hand, and fix our station a few years farther into life; that eminence will present a prospect, which a few present fears and prejudices conceal from our sight." - Common Sense, January 10, 1776

"Perhaps the sentiments contained in the following pages, are not YET sufficiently fashionable to procure them general favour; a long habit of not thinking a thing WRONG, gives it a superficial appearance of being RIGHT, and raises at first a formidable outcry in defense of custom. But the tumult soon subsides. Time makes more converts than reason." - Common Sense, January 10, 1776
"The cause of America is in a great measure the cause of all mankind. Many circumstances hath, and will arise, which are not local, but universal, and through which the principles of all Lovers of Mankind are affected, and in the Event of which, their Affections are interested. The laying a Country desolate with Fire and Sword, declaring War against the natural rights of all Mankind, and extirpating the Defenders thereof from the Face of the Earth, is the Concern of every Man to whom Nature hath given the Power of feeling; of which Class, regardless of Party Censure, is the AUTHOR." - Common Sense, January 10, 1776

"Who the Author of this Production is, is wholly unnecessary to the Public, as the Object for Attention is the DOCTRINE ITSELF, not the MAN. Yet it may not be unnecessary to say, That he is unconnected with any Party, and under no sort of Influence public or private, but the influence of reason and principle." - Common Sense, January 10, 1776

"Some writers have so confounded society with government, as to leave little or no distinction between them; whereas they are not only different, but have different origins. Society is produced by our wants, and government by our wickedness; the former promotes our happiness POSITIVELY by uniting our affections, the latter NEGATIVELY by restraining our vices. The one encourages intercourse, the other creates distinctions. The first a patron, the last a punisher." - Common Sense, January 10, 1776

"O! ye that love mankind! Ye that dare oppose not only the tyranny but the tyrant, stand forth! Every spot of the Old World is overrun with oppression. Freedom hath been hunted round the globe, Asia and Africa have long expelled her. Europe regards her as a stranger and England hath given her warning to depart. O! receive the fugitive and prepare in time an asylum for mankind." - Common Sense, January 10, 1776

"Suspicion is the companion of mean souls, and the bane of all good society." - Common Sense, January 10, 1776

"WHEREFORE, security being the true design and end of government, it unanswerably follows, that whatever FORM thereof appears most likely to ensure it to us, with the least expense and greatest benefit, is preferable to all others." - Common Sense, January 10, 1776

"Of more worth is one honest man to society and in the sight of God, than all the crowned ruffians that ever lived." - Common Sense, January 10, 1776

"The sun never shined on a cause of greater worth. 'Tis not the affair of a city, a country, a province, or a kingdom, but of a continentÃ¢â‚¬â€of at least one eighth part of the habitable globe. 'Tis not the concern of a day, a year, or an age; posterity are virtually involved in the contest, and will be more or less affected, even to the end of time, by the proceedings now. Now is the seed time of continental union, faith and honor. The least fracture now will be like a name engraved with the point of a pin on the tender rind of a young oak; The wound will enlarge with the tree, and posterity read it in full grown characters." - Common Sense, January 10, 1776

"It is of the utmost danger to society to make it (religion) a party in political disputes." - Common Sense, January 10, 1776

"Mingling religion with politics may be disavowed and reprobated by every inhabitant of America." -
Common Sense, January 10, 1776

"These are the times that try men's souls. The summer soldier and the sunshine patriot will, in this crisis, shrink from the service of their country; but he that stands it now, deserves the love and thanks of man and woman." - Common Sense, January 10, 1776

You can read the complete text of Thomas Paine's Common Sense here.

We have many more Thomas Paine Quotes

Did you enjoy these Thomas Paine Quotes? Check out these inspirational quotes from some other Founding Fathers