Read Thomas Paine Quotes from his own writings and letters from the years 1775 and 1776. Most of the quotes on this page are from Thomas Paine's works The Rights of Man and The Age of Reason. Paine moved to England in 1787 and wrote The Rights of Man in defense of the French Revolution. It focused on the idea that the nobility did not have an inherent right to govern the masses. It was predictably popular in England and became outlawed. Paine was tried for sedition against the crown, but escaped to France in 1792. The The Age of Reason was written by Paine to counter the French Revolution's promotion of atheism. As a deist, Paine believed in a Creator God, but did not believe in the divine inspiration of the Bible. This belief led to widespread criticism of the work by the same Founding Fathers that had praised his earlier works. These Thomas Paine Quotes are listed chronologically and there are links to more before and after this time period at the bottom of the page.

"The summer soldier and the sunshine patriot will, in this crisis, shrink from the service of their country." - Pennsylvania Journal, December 19, 1785

"War involves in its progress such a train of unforeseen and unsupposed circumstances that no human wisdom can calculate the end. It has but one thing certain, and that is to increase taxes." - Prospects on the Rubicon, 1787

"It has been the error of schools to teach astronomy, and all the other sciences and subjects of natural philosophy, as accomplishments only; whereas they should be taught theologically, or with reference to the Being who is the Author of them: for all the principles of science are of divine origin. Man cannot make, or invent, or contrive principles; he can only discover them, and he ought to look through the discovery to the Author. When we examine an extraordinary piece of machinery, an astonishing pile of architecture, a well-executed statue, or a highly-finished painting where life and action are imitated, and habit only prevents our mistaking a surface of light and shade for cubical solidity, our ideas are naturally led to think of the extensive genius and talent of the artist. When we study the elements of geometry, we think of Euclid. When we speak of gravitation, we think of Newton. How, then, is it that when we study the works of God in creation, we stop short and do not think of God? It is from the error of the schools in having taught those subjects as accomplishments only and thereby separated the study of them from the Being who is the Author of them... The evil that has resulted from the error of the schools in teaching natural philosophy as an accomplishment only has been that of generating in the pupils a species of atheism. Instead of looking through the works of creation to the Creator Himself, they stop short and employ the knowledge they acquire to create doubts of His existence. They labor with studied ingenuity to ascribe everything they behold to innate properties of matter and jump over all the rest by saying that matter is eternal. And when we speak of looking through nature up to natureÃ¢â‚¬â„¢s God, we speak philosophically the same rational language as when we speak of looking through human laws up to the power that ordained them. God is the power of first cause, nature is the law, and matter is the subject acted upon. But infidelity, by ascribing every phenomenon to properties of matter, conceives a system for which it cannot account and yet it pretends to demonstrate." - Discourse at the Society of Theophilanthropists in Paris, 1787

"He that would make his own liberty secure, must guard even his enemy from oppression; for if he violates this duty, he establishes a precedent that will reach to himself." - Dissertation on First Principles of Government, December 23, 1791

"If, from the more wretched parts of the old world, we look at those which are in an advanced stage of improvement, we still find the greedy hand of government thrusting itself into every corner and crevice of industry, and grasping the spoil of the multitude. Invention is continually exercised, to furnish new pretenses for revenues and taxation. It watches prosperity as its prey and permits none to escape without tribute." - The Rights of Man, Part 1, 1791

"(Edmund Burke) is not affected by the reality of distress touching his heart, but by the showy resemblance of it striking his imagination. He pities the plumage, but forgets the dying bird." - The Rights of Man, Part 1, 1791 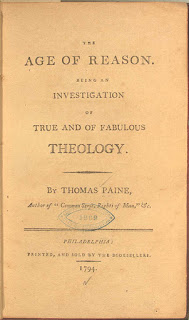 "I speak an open and disinterested language, dictated by no passion but that of humanity. To me, who have not only refused offers, because I thought them improper, but have declined rewards I might with reputation have accepted, it is no wonder that meanness and imposition appear disgustful. Independence is my happiness, and I view things as they are, without regard to place or person; my country is the world, and my religion is to do good." - The Rights of Man, Part 1, 1791

"Man is not the enemy of man but through the medium of a false system of government." - The Rights of Man, Part 1, 1791

"Freedom had been hunted round the globe; reason was considered as rebellion; and the slavery of fear had made men afraid to think. But such is the irresistible nature of truth, that all it asks, and all it wants, is the liberty of appearing." - The Rights of Man, Part 2, 1791

"Give to every other human being every right that you claim for yourself that is my doctrine." - The Rights of Man, Part 2, 1792

"A little matter will move a party, but it must be something great that moves a nation." - The Rights of Man, Part 2, 1792

"A nation under a well regulated government, should permit none to remain uninstructed. It is monarchical and aristocratical government only that requires ignorance for its support." - The Rights of Man, Part 2, 1792

"Reason obeys itself; and ignorance does whatever is dictated to it." - The Rights of Man, Conclusion, 1792

"All national institutions of churches, whether Jewish, Christian, or Turkish, appear to me no other than human inventions set up to terrify and enslave mankind, and monopolize power and profit." - The Age of Reason, Part 1, 1793

"Whenever we read the obscene stories the voluptuous debaucheries, the cruel and torturous executions, the unrelenting vindictiveness with which more than half the bible is filled, it would be more consistent that we call it the word of a demon rather than the word of god. It is a history of wickedness that has served to corrupt and brutalize mankind; and, for my part, I sincerely detest it as I detest everything that is cruel." - The Age of Reason, Part 1, 1793

"It is necessary to the happiness of man, that he be mentally faithful to himself. Infidelity does not consist in believing, or in disbelieving; it consists in professing to believe what he does not believe." - The Age of Reason, Part 1, 1793

"It is impossible to calculate the moral mischief, if I may so express it, that mental lying has produced in society. When a man has so far corrupted and prostituted the chastity of his mind, as to subscribe his professional belief to things he does not believe, he has prepared himself for the commission of every other crime." - The Age of Reason, Part 1, 1793

"When authors and critics talk of the sublime, they see not how nearly it borders on the ridiculous." - The Age of Reason, Part 1, 1793

"It is a contradiction in terms and ideas to call anything a revelation that comes to us at second hand, either verbally or in writing. Revelation is necessarily limited to the first communication. After this, it is only an account of something which that person says was a revelation made to him; and though he may find himself obliged to believe it, it cannot be incumbent on me to believe it in the same manner, for it was not a revelation made to me, and I have only his word for it that it was made to him." - The Age of Reason, Part 1, 1793

"But if objects for gratitude and admiration are our desire, do they not present themselves every hour to our eyes? Do we not see a fair creation prepared to receive us the instant we are born - a world furnished to our hands, that cost us nothing? Is it we that light up the sun, that pour down the rain, and fill the earth with abundance? Whether we sleep or wake, the vast machinery of the universe still goes on. Are these things, and the blessings they indicate in future, nothing to us? Can our gross feelings be excited by no other subjects than tragedy and suicide? Or is the gloomy pride of man become so intolerable, that nothing can flatter it but a sacrifice of the Creator?" - The Age of Reason, Part 1, 1793

If you liked these Thomas Paine Quotes, you might like to read the complete text of Thomas Paine's Common Sense here.