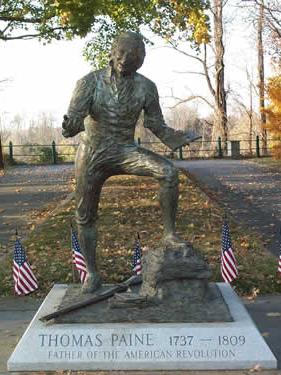 Quotes by Thomas Paine. These quotes are from Paine's own letters and writings between the years 1793 and 1806. Many of these Quotes by Thomas Paine come from his work The Age of Reason which he wrote to counter the promotion of athetism in the French Revolution. Paine was a deist and therefore believed in a Creator, but did not believe in the divine inspiration of the Bible. This caused him to receive strong criticism from the same Founding Fathers who had praised his earlier works Common Sense and The American Crisis, which helped fuel the American Revolution. These Quotes by Thomas Paine are listed chronologically with links to more before this period at the bottom.

"I believe in one God and no more, and I hope for happiness beyond this life. I believe in the equality of man; and I believe that religious duties consist in doing justice, loving mercy, and endeavoring to make our fellow creatures happy." - The Age of Reason, Part 1, 1793

"If Jesus Christ was the being which those Mythologists tell us he was, and that he came into this world to suffer, which is a word they sometimes use instead of to die, the only real suffering he could have endured, would have been to live. His existence here was a state of exilement or transportation from Heaven, and the way back to his original country was to die. In fine, everything in this strange system is the reverse of what it pretends to be." - The Age of Reason, Part 1, 1793

"The doctrine of redemption is founded on a mere pecuniary idea corresponding to that of a debt which another person might pay; and as this pecuniary idea corresponds again with the system of second redemption, obtained through the means of money given to the Church for pardons, the probability is that the same persons fabricated both the one and the other of those theories; and that, in truth there is no such thing as redemption - that it is fabulous, and that man stands in the same relative condition with his Maker as he ever did stand since man existed, and that it is his greatest consolation to think so." - The Age of Reason, Part 1, 1793

"...for what is the amount of all his prayers but an attempt to make the Almighty change his mind, and act otherwise than he does? It is as if he were to say: Thou knowest not so well as I." - The Age of Reason, Part 1, 1793

"The word of god is the creation we behold and it is in this word, which no human invention can counterfeit or alter, that God speaketh universally to man." - The Age of Reason, Part 1, 1793

"What more does man want to know than that the hand or power that made these things is divine, is omnipotent? Let him believe this with the force it is impossible to repel, if he permits his reason to act, and his rule of moral life will follow of course." - The Age of Reason, Part 1, 1793

"As to the Christian system of faith, it appears to me as a species of Atheism - a sort of religious denial of God. It professes to believe in a man rather than in God. It is a compound made up chiefly of Manism with but little Deism, and is as near to Atheism as twilight is to darkness. It introduces between man and his Maker an opaque body, which it calls a Redeemer, as the moon introduces her opaque self between the earth and the sun, and it produces by this means a religious, or an irreligious, eclipse of light. It has put the whole orbit of reason into shade." - The Age of Reason, Part 1, 1793

"That which is now called natural philosophy, embracing the whole circle of science, of which astronomy occupies the chief place, is the study of the works of God, and of the power and wisdom of God in his works, and is the true theology." - The Age of Reason, Part 1, 1793

"It is with a pious fraud as with a bad action; it begets a calamitous necessity of going on." - The Age of Reason, Part 1, 1793

"The Book of Job and the 19th Psalm, which even the Church admits to be more ancient than the chronological order in which they stand in the book called the Bible, are theological orations conformable to the original system of theology. The internal evidence of those orations proves to a demonstration that the study and contemplation of the works of creation, and of the power and wisdom of God, revealed and manifested in those works, made a great part in the religious devotion of the times in which they were written; and it was this devotional study and contemplation that led to the discovery of the principles upon which what are now called sciences are established; and it is to the discovery of these principles that almost all the arts that contribute to the convenience of human life owe their existence. Every principal art has some science for its parent, though the person who mechanically performs the work does not always, and but very seldom, perceive the connection." - The Age of Reason, Part 1, 1793

"It is a fraud of the Christian system to call the sciences human invention; it is only the application of them that is human. Every science has for its basis a system of principles as fixed and unalterable as those by which the universe is regulated and governed. Man cannot make principles, he can only discover them." - The Age of Reason, Part 1, 1793

"The Almighty Lecturer, by displaying the principles of science in the structure of the universe, has invited man to study and to imitation. It is as if He had said to the inhabitants of this globe that we call ours, "I have made an earth for man to dwell upon, and I have rendered the starry heavens visible, to teach him science and the arts. He can now provide for his own comfort, and learn from my munificence to all to be kind to each other." - The Age of Reason, Part 1, 1793

"People in general do not know what wickedness there is in this pretended word of God. Brought up in habits of superstition, they take it for granted that the Bible is true, and that it is good; they permit themselves not to doubt of it, and they carry the ideas they form of the benevolence of the Almighty to the book which they have been taught to believe was written by his authority. Good heavens! it is quite another thing; it is a book of lies, wickedness, and blasphemy; for what can be greater blasphemy than to ascribe the wickedness of man to the orders of the Almighty?" - The Age of Reason, Part 2, 1795

"Of all the systems of religion that ever were invented, there is none more derogatory to the Almighty, more unedifying to man, more repugnant to reason, and more contradictory in itself, than this thing called Christianity. Too absurd for belief, too impossible to convince, and too inconsistent for practice, it renders the heart torpid, or produces only atheists and fanatics." - The Age of Reason, Part 3, 1795

"The right of voting for representatives is the primary right by which other rights are protected. To take away this right is to reduce a man to slavery, for slavery consists in being subject to the will of another, and he that has not a vote in the election of representatives is in this case." - First Principles of Government, July, 1795

"It is never to be expected in a revolution that every man is to change his opinion at the same moment. There never yet was any truth or any principle so irresistibly obvious that all men believed it at once. Time and reason must cooperate with each other to the final establishment of any principle; and therefore those who may happen to be first convinced have not a right to persecute others, on whom conviction operates more slowly. The moral principle of revolutions is to instruct, not to destroy." - First Principles of Government, July, 1795

"It is the nature and intention of a constitution to prevent governing by party, by establishing a common principle that shall limit and control the power and impulse of party, and that says to all parties, thus far shalt thou go and no further. But in the absence of a constitution, men look entirely to party; and instead of principle governing party, party governs principle." - First Principles of Government, July, 1795

"An avidity to punish is always dangerous to liberty. It leads men to stretch, to misinterpret, and to misapply even the best of laws. He that would make his own liberty secure must guard even his enemy from oppression; for if he violates this duty he establishes a precedent that will reach to himself." - First Principles of Government, July, 1795

"The Reign of Terror that raged in America during the latter end of the Washington Administration, and the whole of that of Adams, is enveloped in mystery to me. That there were men in the Government hostile to the representative system, was once their toast, though it is now their overthrow, and therefore the fact is established against them." - Third Letter to the Citizens of the United States, 1802

"The christian religion is a parody on the worship of the Sun, in which they put a man whom they call Christ, in the place of the Sun, and pay him the same adoration which was originally paid to the Sun." - An Essay on the Origin of Free-Masonry, 1803-05

"As to the book called the Bible, it is blasphemy to call it the Word of God. It is a book of lies and contradictions, and a history of bad times and bad men. There are but a few good characters in the whole book." - Letter to William Duane, April 23, 1806

If you liked these Quotes by Thomas Paine, you might like to read the complete text of Thomas Paine's Common Sense here.