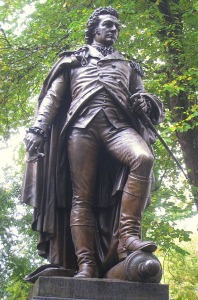 On This Day in History, January 30, 1797, Revolutionary War General John Glover dies. Glover was born in Salem, Massachusetts and lived most of his life in Marblehead. John originally trained to be a cordwainer, or a maker of fine leather shoes, but later he became a sailor and eventually bought his own fishing boat. In time, he owned several fishing schooners and became fairly wealthy.

John first joined the militia in 1759. In 1775, he became lieutenant colonel of a Marblehead regiment. Glover took the regiment to the Siege of Boston where he met George Washington. Washington was impressed with the discipline of the Marblehead Regiment and made some of them his own personal guard. Glover's own ship, the Hannah, was recruited by Washington as the first of his fleet of schooners used to harass British shipping and is sometimes called the first ship of the US Navy.

When the Siege of Boston lifted, Glover's regiment went to New York where they participated in one of the war's most famous moments. Washington's forces were being overwhelmed on Long Island. Since most of the Marblehead Regiment were sailors, he turned to Glover to evacuate the army from Brooklyn across the East River to Manhattan in the middle of the night, a mission they accomplished successfully. Just six weeks later, Glover's regiment played a key role in allowing Washington's army to escape to the north by blocking a British landing force of 4,000 men at the Battle of Pell's Point. 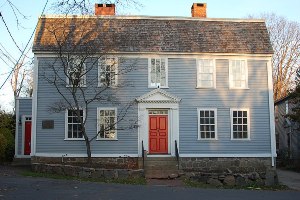 Washington's army was finally driven out of New York and retreated across New Jersey and into Pennsylvania. Many soldiers thought the war was already lost by this point and Washington came up with the plan to take the Hessian garrison at Trenton to try to turn things around. Once again, he turned to John Glover and the Marblehead Regiment to help ferry 1,700 soldiers and their equipment across the Delaware River in the middle of the night on December 25th, 1776. The river was filled with dangerous chunks of ice and a snowstorm blinded visibility, but the crossing was a success and the victory at Trenton helped turn the tide of the war.

After this, Glover returned home to attend to family business. In February, 1777, he turned down a promotion to brigadier general from Congress, thinking he was not adequate for the job, but relented after George Washington personally asked him to reconsider. Glover was then involved in the Saratoga Campaign and supervised the transport of 5,000 captured British, Hessian and Canadian prisoners to Boston. He was also part of the failed attempt to retake Newport, Rhode Island from the British.

Glover was finally posted to New York for the rest of the war, but saw no more major military action. He served on the board that convicted and sentenced British spy John André to death and was the officer of the day on the day André was executed, meaning he was the officer in charge of operations at the post that day.

At the end of the war, John Glover received an honorary promotion to Major General. He died at his home in 1797, which still stands in Marblehead today.