Samuel Adams was a devout Christian, as were most of the Founding Fathers. They made frequent appeals to God during and after their struggle for independence won in the Revolutionary War. Realize that the Founders did not consider this to be against the Constitution, as some people claim today.

The First Amendment, which guarantees religious freedom, was created only four years before this proclamation. It is sometimes interpreted to mean that public officials cannot make any reference to God or Biblical values. Samuel Adams would have been aware, as Governor of Massachusetts, if such a policy existed. Instead, he boldly calls on all citizens to ask God for His blessings, to turn away from sin and to seek forgiveness through Jesus Christ. The Founders did not intend to prohibit all religious expressions by government officials. Instead, they desired to guarantee the right of Americans to worship God according to their own conscience and to prevent any one denomination of Christians from dictating their practices to others. 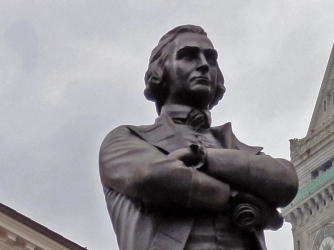 For a Day of PUBLIC FASTING, HUMILIATION and PRAYER

THE supreme Ruler of the Universe, having been pleased, in the course of His Providence, to establish the Independence of the United States of America, and to cause them to assume their rank, amount the nations of the Earth, and bless them with Liberty, Peace and Plenty; we ought to be led by Religious feelings of Gratitude; and to walk before Him, in all Humility, according to His most Holy Law. - But, as the depravity of our Hearts has, in so many instances drawn us aside from the path of duty, so that we have frequently offended our Divine and Merciful Benefactor; it is therefore highly incumbent on us, according to the ancient and laudable practice of our pious Ancestors, to open the year by a public and solemn Fast. - That with true repentance and contrition of Heart, we may unitedly implore the forgiveness of our Sins, through the merits of Jesus Christ, and humbly supplicate our Heavenly Father, to grant us the aids of His Grace, for the amendment of our Hearts and Lives, and vouchsafe His smiles upon our temporal concerns:

I HAVE therefore thought fit to appoint, and with the advice and consent of the Council, I do hereby appoint Thursday, the Second Day of April next, to be observed as a Day of Public Fasting, Humiliation and Prayer throughout this Commonwealth: - Calling upon the Ministers of the Gospel, of every Denomination, with their respective Congregations, to assemble on that Day, and devoutly implore the Divine forgiveness of our Sins, - To pray that the Light of the Gospel, and the rights of Conscience, may be continued to the people of United America; and that His Holy Word may be improved by them, so that the name of God may be exalted, and their own Liberty and Happiness secured. - That He would be graciously pleased to bless our Federal Government; that by a wise administration, it may be a sure guide and safe protection in national concerns, for the people who have established, and who support it - That He would continue to us the invaluable Blessings of Civil Liberty; guarding us against intestine commotions; and enabling the United States, in the exercise of such Governmental powers, as are devolved upon them, so that the honor and dignity of our Nation, upon the Sea and the Land, may be supported, and Peace with the other Powers of the World, upon safe and honorable terms, may be maintained.

That he would direct the administration of our Federal and State Governments, so that the lives, liberties and property of all the Citizens, and the just rights of the People, as Men and Citizens, may be forever acknowledged, and at all times defended, by Constitutions, founded upon equal rights; and by good and wholesome Laws, wisely and judiciously administered and duly executed.

That he would enable Legislators and Magistrates of this Commonwealth, to discharge the important duties incumbent on them, that the People may have good reason to feel themselves happy and safe, and lead quiet and peaceable lives in all Godliness and Honesty.

That He would incline the Natives of the Wilderness, to listen to reasonable offers of Peace, that tranquility and security may be established on the Frontiers Of our Country; - That He would graciously regard the Lives and Health of the People of this and our sister States, and preserve them from contagious and wasting diseases: To crown the ensuing Year with Plenty and Prosperity, by his blessing on our Husbandry, our Fisheries, our Commerce, and all the labor of our Hands - to affect our minds with a sense of our entire dependence upon Him, and of His great goodness towards us, that when we may present ourselves before Him, at the close of the Year, with our thank - offerings, our Hearts may by His grace, be prepared to do it in a manner acceptable to Him.

That He would be graciously pleased to establish the French Republic, and prosper others who are contending for the Rights of Men, and dispose all Nations to favor the same principles, and return to Peace and Friendship.

That He would in his great Mercy, remember the unhappy state of our Fellow-Citizens and others, who are groaning under bondage, in a foreign Land. That He would soften the Hearts of those who have led them captive, inclining that People to show them favor during their Captivity, and in His own due time open a door for their relief: - And finally, that He would over-rule all the confusions that are in the Earth, of the speedy establishment of the Redeemer's Kingdom, which consisteth in Righteousness and Peace.

And I do recommend to the People of this Commonwealth, to abstain from all unnecessary Labor and Recreation on the said Day.

GIVEN at the Council-Chamber, in Boston, this Twenty-eighth Day of February, in the Year of our Lord, One Thousand Seven Hundred and Ninety-five, and in the Nineteenth Year of the Independence of the United States of America.

GOD save the COMMONWEALTH of MASSACHUSETTS!