The Battle of Quinby Bridge and Shubrick's Plantation

On this day in history, July 17, 1781, the Battle of Quinby Bridge and Shubrick's Plantation gives the British temporary relief as they fall back to Charleston  after losing control of the interior of South Carolina and Georgia.

In the summer of 1781, American General Nathanael Greene began systematically taking back the south from British armies. After losing control of much of the interior, British forces began moving back to Charleston in an ever shrinking ring around the city. One such place that served as a major supply depot was Monck's Corner, about 30 miles north of Charleston. 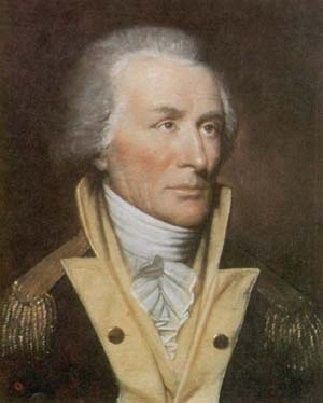 In mid-July, British Lt. Col. James Coates learned that a large force of 600-700 men, under American Brigadier General Thomas Sumter, was descending on Monck's Corner. Coates was in charge of protecting provisions and supplies at Monck's Corner. He quickly decided to get the supplies out before the Americans could capture them.

While skirmishes took place between various roaming groups of Americans and British soldiers, Coates moved out with about 600 men, first transporting all the supplies to Biggin Church. Coates, however, began to see that his position was untenable and moved out yet again on the evening of July 16th, setting the church and everything in it on fire to prevent it falling into American hands. 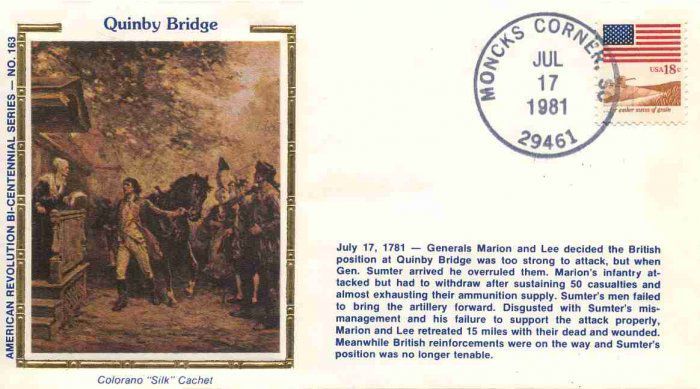 Around 3 am, American scouts noticed the fire and informed General Sumter, who immediately took off after Coates. Coates' group split in two, as did the Americans to follow them. The main body of soldiers crossed Quinby Creek at Quinby Bridge near the Cooper River. Upon crossing the bridge, Coates' men began tearing up the planking, but the Americans charged the bridge on horseback, driving the British back. Much of the planking fell from the bridge and some of the horses jumped the gap, while other soldiers began walking across on the narrow support beams.

The British scattered on the other side, but soon regrouped and those Americans which had already crossed retreated to the woods. Coates then took over the Shubrick Plantation, placing his men strategically in the main house and outbuildings. General Francis Marion and Lt. Col. Henry Lee, who were leading the pursuit, stopped when they saw what a strong position the British had at the plantation and waited for General Sumter to arrive.

When Sumter arrived, he ordered an immediate attack, which Marion and Lee strongly advised against. Sumter overrode their wishes, however, and ordered an assault. The attackers had little cover approaching the house, and dozens were killed. Sumter finally called the assault off, hoping to renew it in the morning when his only cannon arrived.

Marion, Lee and others were furious at the needless loss of life. Nearly every commander abandoned Sumter in the night or in the morning, forcing him to call off a further attack. The Battle of Quinby Bridge cemented Sumter's poor reputation and was the last time many of these soldiers worked with him. The battle gave the British somewhat of a reprieve on their retreat to Charleston, but the American noose was tightening and the British would soon be confined to Charleston until the end of the war.