The Rattlesnake
as a Symbol of America
by Benjamin Franklin

The Rattlesnake as a Symbol of America by Benjamin Franklin is an essay written by Franklin in the December 27, 1775 edition of his Pennsylvania Gazette. Franklin talks of seeing the newly formed United States Marines marching with drums painted yellow with a rattlesnake and the words "Don't Tread On Me." He tells why he believes the rattlesnake would be a good national symbol for America, "her eye excelled in brightness, that of any other animal... She may therefore be esteemed an emblem of vigilance. She never begins an attack, nor, when once engaged, ever surrenders." 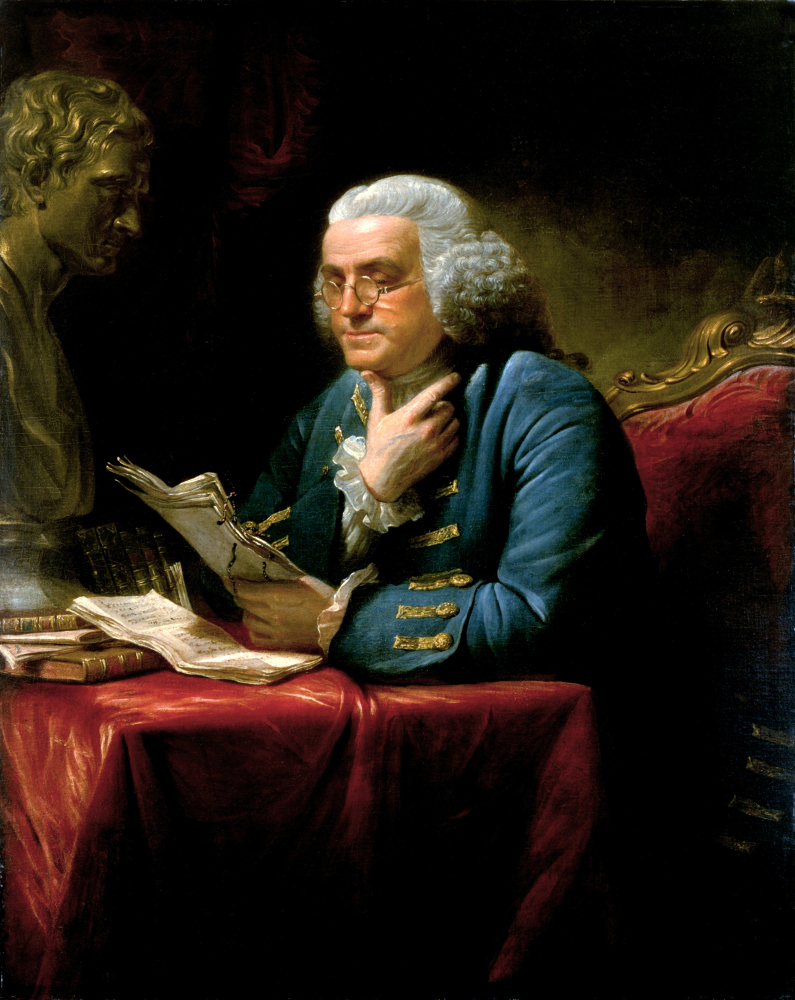 Benjamin Franklin's use of the rattlesnake to represent America actually began in 1751 when he published a satirical article condemning Great Britain for sending condemned convicts to the American colonies. Franklin suggested the colonists should send a bunch of snakes back to England as thanks.

In 1754, Franklin published the first political cartoon ever made in the colonies. During the French and Indian War, the colonies sent representatives to meet at the Albany Congress in Albany, New York. The colonies were discussing their joint defense from the French and their Indian allies. Franklin submitted a Plan of Union that recommended the colonies form a joint congress to oversee their defense. The plan was not adopted, but it was the first time a colonial union was discussed, twenty years before the Revolutionary War. 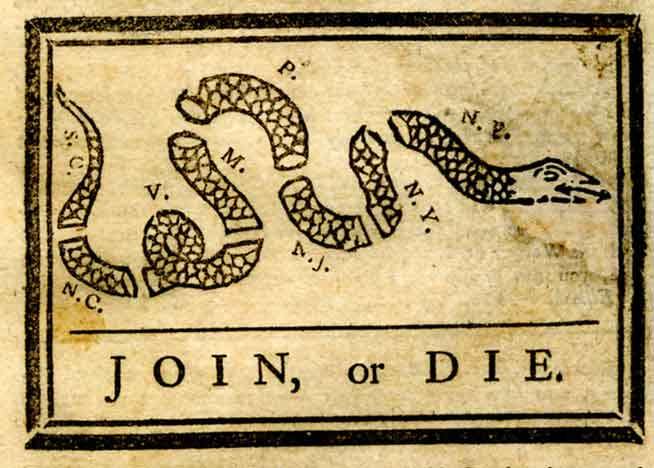 To encourage support of the Albany Plan of Union, Franklin published the Join or Die cartoon, which featured a snake cut up in 8 pieces, each piece representing the different colonies. The cartoon played on a common superstition of the time that said a snake cut up in pieces would come back to life if the pieces were put back together before sunset. Beneath the snake were the words "Join or Die." The meaning of the cartoon was that the colonists could be successful if they worked together, but if they each tried to work alone, they would fail.

The cartoon was widely reproduced by American newspapers and the snake soon became a symbol of American unity. During the 1765 Stamp Act crisis, the snake as a symbol of unity saw a resurgence as the colonists unified against their common enemy - the Stamp Act. In the years up to the American Revolution, the rattlesnake, often accompanied by the words "Don't Tread on Me," made their way onto flags, paper money, uniforms and many other items.

The Rattlesnake as a Symbol of America

I observed on one of the drums belonging to the marines now raising, there was painted a Rattle-Snake, with this modest motto under it, "Don't tread on me." As I know it is the custom to have some device on the arms of every country, I supposed this may have been intended for the arms of America; and as I have nothing to do with public affairs, and as my time is perfectly my own, in order to divert an idle hour, I sat down to guess what could have been intended by this uncommon device -- I took care, however, to consult on this occasion a person who is acquainted with heraldry, from whom I learned, that it is a rule among the learned of that science "That the worthy properties of the animal, in the crest-born, shall be considered," and, "That the base ones cannot have been intended;" he likewise informed me that the ancients considered the serpent as an emblem of wisdom, and in a certain attitude of endless duration - both which circumstances I suppose may have been had in view. Having gained this intelligence, and recollecting that countries are sometimes represented by animals peculiar to them, it occurred to me that the Rattle-Snake is found in no other quarter of the world besides America, and may therefore have been chosen, on that account, to represent her.

But then "the worldly properties" of a Snake I judged would be hard to point out. This rather raised than suppressed my curiosity, and having frequently seen the Rattle-Snake, I ran over in my mind every property by which she was distinguished, not only from other animals, but from those of the same genus or class of animals, endeavoring to fix some meaning to each, not wholly inconsistent with common sense.

I recollected that her eye excelled in brightness, that of any other animal, and that she has no eye-lids. She may therefore be esteemed an emblem of vigilance. She never begins an attack, nor, when once engaged, ever surrenders: She is therefore an emblem of magnanimity and true courage. As if anxious to prevent all pretensions of quarreling with her, the weapons with which nature has furnished her, she conceals in the roof of her mouth, so that, to those who are unacquainted with her, she appears to be a most defenseless animal; and even when those weapons are shown and extended for her defense, they appear weak and contemptible; but their wounds however small, are decisive and fatal. Conscious of this, she never wounds 'till she has generously given notice, even to her enemy, and cautioned him against the danger of treading on her.

Was I wrong, Sir, in thinking this a strong picture of the temper and conduct of America? The poison of her teeth is the necessary means of digesting her food, and at the same time is certain destruction to her enemies. This may be understood to intimate that those things which are destructive to our enemies, may be to us not only harmless, but absolutely necessary to our existence. I confess I was wholly at a loss what to make of the rattles, 'till I went back and counted them and found them just thirteen, exactly the number of the Colonies united in America; and I recollected too that this was the only part of the Snake which increased in numbers. Perhaps it might be only fancy, but, I conceited the painter had shown a half formed additional rattle, which, I suppose, may have been intended to represent the province of Canada.

'Tis curious and amazing to observe how distinct and independent of each other the rattles of this animal are, and yet how firmly they are united together, so as never to be separated but by breaking them to pieces. One of those rattles singly, is incapable of producing sound, but the ringing of thirteen together, is sufficient to alarm the boldest man living.

The Rattle-Snake is solitary, and associates with her kind only when it is necessary for their preservation. In winter, the warmth of a number together will preserve their lives, while singly, they would probably perish. The power of fascination attributed to her, by a generous construction, may be understood to mean, that those who consider the liberty and blessings which America affords, and once come over to her, never afterwards leave her, but spend their lives with her. She strongly resembles America in this, that she is beautiful in youth and her beauty increaseth with her age, "her tongue also is blue and forked as the lightning, and her abode is among impenetrable rocks."