The Battle of Kettle Creek is won 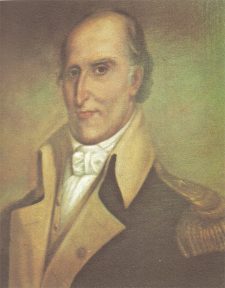 On this day in history, February 14, 1779, the Battle of Kettle Creek is won, which turns out to be one of the most important battles in Georgia during the American Revolution. The British had begun their southern strategy to take back the southern states by capturing Savannah in December, 1778. The strategy revolved around the belief that large numbers of Loyalists in the southern states would rally to the British and help defeat the patriot uprising. The Battle of Kettle Creek disproved the theory.

After capturing Savannah, a force was sent to take Augusta under Lieutenant Colonel Archibald Campbell. Campbell dispatched well-known Loyalist militia leader John Boyd to travel through the Georgia and South Carolina back country to recruit Loyalist soldiers. Boyd was able to gather some 600 to 800 men and set out to rendezvous with Campbell, who had arrived in Augusta and taken the town without a fight on January 24.

Several smaller militia groups under South Carolina Major Andrew Pickens and Georgia Colonel and Lieutenant Colonel John Dooly and Elijah Clarke gathered together to attack Boyd's Loyalists. On February 14, Boyd's men stopped to rest and eat at Kettle Creek near present day Washington, Georgia. Pickens, in command of about 350 men, sent Dooly to the right and Clarke to the left, while his own men advanced from the center. An advance force in front of Pickens alarmed Boyd's sentries and began firing, which alarmed Boyd's entire camp, ruining the surprise attack. In addition, both Dooly's and Clarke's men were hindered in the swamps, ruining Pickens' plan to attack from three sides. 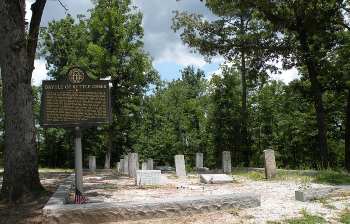 Battle of Kettle Creek Battlefield Wilkes County, Georgia This is the site of the battle. You can see the graves of several American soldiers who died in the battle.

In spite of these errors, Boyd met his fate when he was shot with a mortal wound causing the rest of his men to panic and scatter. Pickens advanced and Clarke was finally able to rally through the swamp and lead another attack on the main force of Loyalists. In the end, 9 patriots were killed and 23 wounded, while somewhere between 40 and 70 Loyalists were killed and another 75 taken prisoner. The more significant statistic though, is that only 270 of Boyd's men finally joined Campbell's British troops. The rest went home discouraged and afraid. Several of the prisoners were tried for treason and hung. The British defeat at Kettle Creek proved that Loyalist sentiment in the south was not as strong as the British had hoped.

Ironically, on the same day as the Battle of Kettle Creek, Campbell decided to abandon Augusta and head back to the coast, only three weeks after taking the town. He did this because of another gathering patriot army under Generals Andrew Williamson and John Ashe and because he didn't know whether Boyd would succeed in bringing a large army of Loyalists to his aid. Of course, Campbell turned out to be right.

After the Battle of Kettle Creek, Major Pickens tended to the mortally wounded John Boyd, with whom he was probably acquainted. Boyd gave Pickens a message and some personal items to give to his wife, which he later did. Pickens would go on to serve in several major battles and be promoted to Brigadier General and would later become a member of the US House of Representatives from South Carolina.