On this day in history, April 17, 1790, Benjamin Franklin dies in Philadelphia. Franklin is one of the most well-known and beloved Founding Fathers of the United States. Ben Franklin was born in Boston to a tallow chandler, meaning his father made candles and soap from "tallow" or animal fat. Ben had 16 brothers and sisters.

Ben had less than two years of formal schooling as a boy and was apprenticed to his older brother James who owned a printing shop. This is where Ben learned the skills printing and writing that would later make him rich. Franklin ran away to Philadelphia at 17 and eventually began his own printing business. He purchased the Pennsylvania Gazette in 1729 and began printing his Poor Richard's Almanack in 1732, which made him a fortune and gave him the ability to retire at the age of 42.

After his retirement Franklin became involved in studying electricity. His experiments and findings helped shaped our modern understanding of electrical currents. He even coined such terms as positive and negative charge, battery, charging and discharging and conductor. His writings about electricity were put into a book by a friend in England and Franklin quickly became a household name.

Franklin's first political offices were as Clerk of the Pennsylvania Assembly and as Deputy Postmaster of Philadelphia. He later served on the Common Council of Philadelphia, as a Justice of the Peace and as an Alderman. In 1753, he became the Deputy Postmaster General for all of North America. Franklin served in the Pennsylvania House for several terms and served as the agent of several colonies in London. 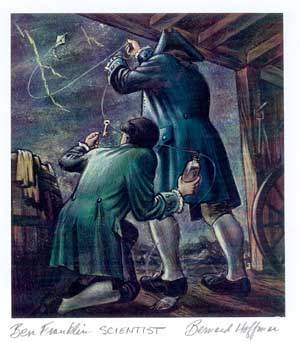 Once the Revolutionary War broke out, Franklin was elected to the Continental Congress where he served on the committee to write the Declaration of Independence. In what was probably his most important role, Franklin served as America's Ambassador to France from 1778-1785. It was during this time that Franklin persuaded King Louis XVI to join the Revolution on the American side, involvement that proved crucial to the American victory.

After the Revolution, Franklin served three terms as governor of Pennsylvania. In one of his last acts of public service, Franklin served as a delegate to the Constitutional Convention in 1787. He encouraged the other members to sign the US Constitution, even though it wasn't perfect. During the Convention, he famously spoke these words:

"In the beginning of the contest with Britain, when we were sensible of danger, we had daily prayers in this room for Divine protection. Our prayers, Sir, were heard, and they were graciously answered. All of us who were engaged in the struggle must have observed frequent instances of superintending providence in our favor... Have we now forgotten that powerful friend? Or do we imagine that we no longer need his assistance? I have lived, Sir, a long time, and the longer I live, the more convincing proofs I see of this truth - that God governs in the affairs of men. And if a sparrow cannot fall to the Ground without his Notice, is it probable that an Empire can rise without his Aid?... I therefore beg leave to move that, henceforth, prayers imploring the assistance of Heaven and its blessing on our deliberation be held in this assembly every morning before we proceed to business."