Benjamin Rush on the Death Penalty
1792

Benjamin Rush on the Death Penalty 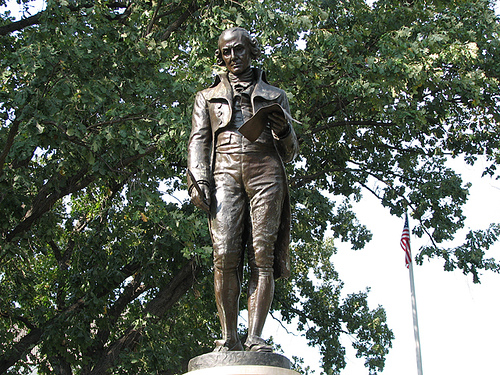 In an essay upon the effects of public punishments upon criminals and upon society, published in the second volume of the American Museum, I hinted, in a short paragraph, at the injustice of punishing murder by death. I shall attempt in the following essay, to support that opinion, and to answer all the objections that have been urged against it.

I. Every man possesses an absolute power over his own liberty and property, but not over his own life. When he becomes a member of political society, he commits the disposal of his liberty and property to his fellow citizens; but as he has no right to dispose of his life, he cannot commit the power over it to any body of men. To take away life, therefore, for any crime, is a violation of the first political compact.

II. The punishment of murder by death, is contrary to reason, and to the order and happiness of society.

1. It lessens the horror of taking away human life, and thereby tends to multiply murders.

2. It produces murder, by its influence upon people who are tired of life, and who, from a supposition, that murder is a less crime than suicide, destroy a life (and often that of a near connexion) and afterwards deliver themselves up to justice, that they may escape from their misery by means of a halter.

3. The punishment of murder by death, multiplies murders, from the difficulty it creates of convicting persons who are guilty of it. Humanity, revolting at the idea of the severity and certainty of a capital punishment, often steps in, and collects such evidence in favour of a murderer, as screens him from justice altogether, or palliates his crime into manslaughter. If the punishment of murder consisted in long confinement, and hard labor, it would be proportioned by the measure of our feelings of justice, and every member of society would be a watchman or a magistrate, to apprehend a destroyer of human life, and to bring him to punishment.

4. The punishment of murder by death, checks the operations of universal justice, by preventing the punishment of every species of murder. Quack doctors--frauds of various kinds--and a licentious press, often destroy life, and sometimes with malice of the most propense nature. If murder were punished by confinement and hard labour, the authors of the numerous murders that have been mentioned, would be dragged forth, and punished according to their deserts. How much order and happiness would arise to society from such a change in human affairs! But who will attempt to define these species of murder, or to prosecute offenders of this stamp, if death is to be the punishment of the crime after it is admitted, and proved to be wilful murder?--only alter the punishment of murder, and these crimes will soon assume their proper names, and probably soon become as rare as murder from common acts of violence.

5. The punishment of murder by death, has been proved to be contrary to the order and happiness of society by the experiments of some of the wisest legislators in Europe. The Empress of Russia, the King of Sweden, and the Duke of Tuscany, have nearly extirpated murder from their dominions, by converting its punishment into the means of benefiting society, and reforming the criminals who perpetrate it.

III. The punishment of murder by death, is contrary to divine revelation. A religion which commands us to forgive and even to do good to our enemies, can never authorise the punishment of murder by death. "Vengeance is mine," said the Lord; "I will repay." It is to no purpose to say here, that this vengeance is taken out of the hands of an individual, and directed against the criminal by the hand of government. It is equally an usurpation of the prerogative of heaven, whether it be inflicted by a single person, or by a whole community.

I cannot take leave of this subject without remarking that capital punishments are the natural offspring of monarchical governments. Kings believe that they possess their crowns by a divine right: no wonder, therefore, they assume the divine power of taking away human life. Kings consider their subjects as their property: no wonder, therefore, they shed their blood with as little emotion as men shed the blood of their sheep or cattle. But the principles of republican governments speak a very different language. They teach us the absurdity of the divine origin of kingly power. They approximate the extreme ranks of men to each other. They restore man to his God--to society--and to himself. They revive and establish the relations of fellow-citizen, friend, and brother. They appreciate human life, and increase public and private obligations to preserve it. They consider human sacrifices as no less offensive to the sovereignty of the people, than they are to the majesty of heaven. They view the attributes of government, like the attributes of the Deity, as infinitely more honoured by destroying evil by means of merciful than by exterminating punishments. The United States have adopted these peaceful and benevolent forms of government. It becomes them therefore to adopt their mild and benevolent principles. An execution in a republic is like a human sacrifice in religion. It is an offering to monarchy, and to that malignant being, who has been styled a murderer from the beginning, and who delights equally in murder, whether it be perpetrated by the cold, but vindictive arm of the law, or by the angry hand of private revenge.