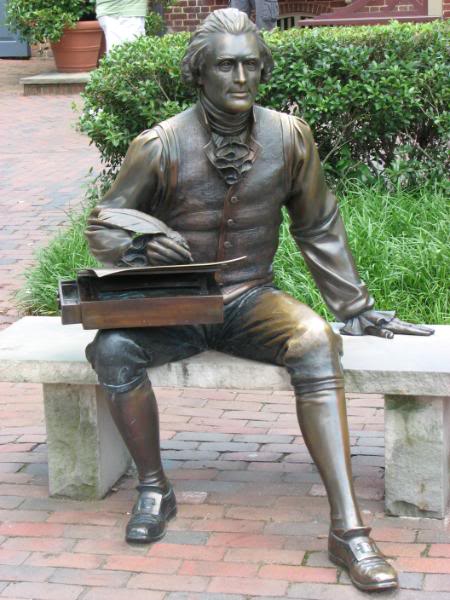 In this Thomas Jefferson letter to Edmund Pendleton, a prominent Virginia politician and Founding Father, Jefferson discusses the death penalty. In Jefferson's day, as in our own, there were differing opinions about capital punishment. Jefferson states in this letter that he believes the death penalty is just in cases of murder and treason. He also advocates sentencing criminals to work on public works projects such as building highways. Jefferson also mentions that criminal sentences should be handled completely by law and not be within the discretion of judges. Such decisions made by judges deteriorate to the level of "impulses of whimsical, capricious designing man," he says.

The fantastical idea of virtue and the public good being a sufficient security to the state against the commission of crimes, which you say you have heard insisted on by some, I assure you was never mine. It is only the sanguinary hue of our penal laws which I meant to object to. Punishments I know are necessary, and I would provide them, strict and inflexible, but proportioned to the crime. Death might be inflicted for murder and perhaps for treason if you would take out of the description of treason all crimes which are not such in their nature. Rape, buggery &c. punish by castration. All other crimes by working on high roads, rivers, gallies &c. a certain time proportioned to the offence. But as this would be no punishment or change of condition to slaves (me miserum!) let them be sent to other countries. By these means we should be freed from the wickedness of the latter, and the former would be living monuments of public vengeance. Laws thus proportionate and mild should never be dispensed with. Let mercy be the character of the law-giver, but let the judge be a mere machine. The mercies of the law will be dispensed equally and impartially to every description of men; those of the judge, or of the executive power, will be the eccentric impulses of whimsical, capricious designing man.