The 6th Amendment Confrontation Clause protects one of the most standard and essential parts of a trial in the United States - the right to confront those who are testifying against you. This clause guarantees that if you are charged with a crime and tried in court, the witnesses must appear before you and make the accusations face to face. The Confrontation Clause reads like this:

"In all criminal prosecutions, the accused shall enjoy the right... to be confronted with the witnesses against him."

Purpose of the Confrontation Clause

The Confrontation Clause serves two main purposes. First, it protects the defendant from statements allegedly made outside of the court being used against him when he has no opportunity to test or challenge the alleged statement, and second, the Confrontation Clause gives a defendant the opportunity to cross-examine the witness, allowing him to test the memory, accuracy and sincerity of the witness.

The Confrontation Clause serves to eliminate most instances of hearsay. Hearsay is a statement that a witness says he heard another make outside of court. Hearsay is normally not allowed to be used as evidence in a trial because the person who supposedly made the statement is not present to be cross-examined and challenged.

History of the Confrontation Clause

The roots of the 6th Amendment Confrontation Clause go back far into English and even Roman history. Have you ever read the Biblical account of the Apostle Paul's trials before he was sent to Rome? In Acts 25:16, the Roman Governor over Judea, Festus, was considering what to do with the Apostle Paul who had been accused of various crimes. Festus made this statement to King Agrippa, "It is not the manner of the Romans to deliver any man up to die before the accused has met his accusers face-to-face, and has been given a chance to defend himself against the charges." 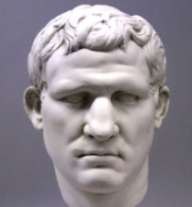 In the 1600's, it was common in English courts for alleged statements to be collected outside of court and used as evidence at trial. Defendants often demanded that the witnesses be brought to face them in court, but it rarely happened. The famous writer and traveler Sir Walter Raleigh, who was the lead person behind the "Lost Colony at Roanoke Island, Virginia," was convicted in court based on such "evidence," a conviction for which he was later put to death, though after many years.

The Founding Fathers were very familiar with out of court statements being used against people at trial. The British government allowed the colonial vice-admiralty courts to use written statements from witnesses, instead of live testimony, in certain cases. This practice was scorned and repudiated by the colonists.

The Bill of Rights was added to the Constitution in order to further protect certain rights from government interference. Among these are freedom of speech, freedom of religion, the right to trial by jury and the right to confront those who are testifying against you, as mentioned in the Confrontation Clause.

James Madison presented twenty proposed amendments to the Constitution on June 8, 1791. There is no record of any opposition or discussion regarding the Confrontation Clause, an indication of how essential it was in the minds of the Founding Fathers. The First Ten Amendments, also known as the Bill of Rights, became law on December 15, 1791, including the Confrontation Clause. You can read more about the purpose of the Bill of Rights here. 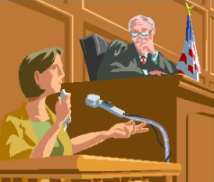 Out of court statements, made in affidavits, or written testimony, are allowed frequently in civil cases, but rarely in criminal cases. This is because of the serious consequences that come with a criminal conviction. One purpose of the Confrontation Clause is to prevent out of court statements from being introduced as evidence in a criminal case. This is also known as hearsay. Hearsay is not permitted in court because the defendant cannot cross-examine or challenge the witness. There are some exceptions to the rule, though, about hearsay being used in court. Statements made by someone on their deathbed are allowed in court. This is because it is normally judged that someone on their deathbed wouldn't make a statement that wasn't important and probably truthful.

Statements made by a witness who is no longer available, such as someone who died, or someone who moved away, are often allowed, but only if the prosecutor used every method at his disposal to get the witness to the trial. Statements made in prior trials are sometimes allowed as well.

A testimonial statement is a statement that is made by a witness who knows that whatever he says is likely to be used in court. For example, a statement made to a police officer or in a deposition is likely to be used in court. So, if a police officer testified in court, "I heard so and so say..." This statement would not be allowed if the witness was not present to be cross-examined by the defense, unless the defense had an opportunity at some time earlier to cross-examine the witness about the statement. 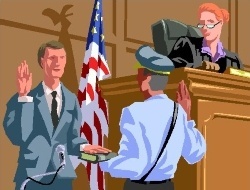 The circumstances of a deposition will explain this. In a deposition, witnesses are asked various questions to establish the facts of the case. Attorneys for both sides are present and both can ask questions of the witness. This is not a trial, only a deposition. It is part of the investigation. The defendant is not allowed to be at a deposition, but his attorney is. So, for example, if during a deposition of a witness, the witness makes a statement, and is cross-examined by the defense attorney, later in the trial, this statement can be brought up by someone else, such as a police officer, and used in the trial.

The right to cross-examine a hostile witness is absolute. The right to see the person face to face is not. The Supreme Court has ruled that:

"The primary object of the constitutional provision in question was to prevent depositions of ex parte affidavits (outside testimony) ...being used against the prisoner in lieu of a personal examination and cross-examination of the witness in which the accused has an opportunity not only of testing the recollection and sifting the conscience of the witness, but of compelling him to stand face to face with the jury in order that they may look at him, and judge by his demeanor upon the stand and the manner in which he gives his testimony whether he is worthy of belief."

This means that the primary purpose of the Confrontation Clause is to prevent outside testimony and allow cross-examination of witnesses. The right to see them face to face is judged to be secondary. So there are some instances when a defendant cannot see the accuser face to face.

In cases involving alleged crimes against children, such as sexual abuse, sometimes the Confrontation Clause's right to see the alleged victim is waived by the court. Because of the alleged trauma the child has already undergone, it is judged that the child would suffer more harm by seeing the alleged perpetrator in court, and that this might inhibit the child from revealing all of the facts. Prosecutors must normally prove to the court using written standards that the child will suffer harm by seeing the perpetrator, in order for the right to see the accuser face to face to be waived.

Sometimes, the right to see the accuser face to face is waived when cameras or video can transmit the image of the accuser, who is in another location, into the court, where the judge, jury, defendant and lawyers can see him. In all cases, even if a face to face meeting is denied, the witness can be cross-examined by the defense counsel. This is not a violation of the Confrontation Clause, according to the Supreme Court.

You can read about several interesting and significant Sixth Amendment Court Cases dealing with the Confrontation Clause here.