The 6th Amendment Public Trial Clause guarantees that people accused of crimes will be tried in public. Public trials may increase embarrassment for accused or convicted people, but are generally believed to be in the accused's best interest because they prevent the judge or other officials from persecuting or punishing the accused in a manner that would violate the law. The Public Trial Clause of the US Bill of Rights' 6th Amendment reads like this:

"In all criminal prosecutions, the accused shall enjoy the right to a... public trial."

Purpose of the Public Trial Clause

The Public Trial serves several basic purposes. First, a public trial guarantees that the defendant will not be treated unfairly by the judge or other officials. Throughout European history, there is a long trail of judicial abuses in private trials. A judge could throw someone in prison who was completely innocent and the defendant would have no way to save himself. Judges could make up false charges, refuse to allow the accused to defend himself or exact enormous sentences that have no relation to the severity of the alleged crime, if trials were held in private.

"Whatever other benefits the guarantee to an accused that his trial be conducted in public may confer upon our society, the guarantee has always been recognized as a safeguard against any attempt to employ our courts as instruments of persecution."

Public trials serve to protect the accused from judicial tyranny, but also serve several public interests. They tend to cause witnesses to come forth with relevant information because the witness hears about the proceedings. They also tend to pressure people to tell the truth because anyone who hears of the proceedings and knows they are lying might come forward and tell the truth.

The Public Trial also serves to increase the public's trust in the judicial and legal system because they can see plainly what is happening in the courtroom. If the public likes what it sees, it will have confidence in the system. If the public doesn't like what it sees, it will elect new officials to replace the old ones and change the laws. The Public Trial also serves to satisfy the public's desire for justice when it sees a criminal receive a just punishment.

History of the Public Trial Clause 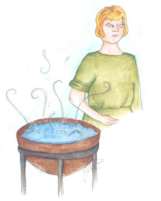 The history of a right to public trial goes back far into English history. The Assize of Clarendon of 1166 was the first time that local citizens were brought in to be a part of court proceedings. Before this time, guilt or innocence of the accused was often determined by using the most barbaric means, such as trial by battle, where the loser in a fight was determined to be guilty, or trial by ordeal, where a defendant was made to walk over red hot ploughshares or carry a red hot iron, or dip his hand in boiling water or lead to prove his innocence. If the skin was not damaged, or if the wound healed quickly, he was determined to be innocent!

Abuses in secret courts were common as well, in European history, from the Spanish Inquisition to England's Court of Star Chamber, which persecuted political and religious dissenters.

As a reaction to these horrible abuses, the idea of the right to a public trial took firm hold in the minds of English citizens to protect themselves from the government. It is not known exactly when the idea was brought to the American colonies because the idea was commonly held by everyone and already by this time nearly all trials were held in public.

Public Trial Clauses were not written in the laws of the early colonies because it was just understood that trials were to be public. Once the Revolutionary War began though, the states and Founding Fathers thought it would be wise to list the right to a public trial specifically in their constitutions, to guarantee that no abuses of this right would occur in the governments they were creating.

The Public Trial Clause and other protections listed in the Bill of Rights were added to the Constitution in 1791 in order to protect the citizens' natural God given rights from government abuses. You can read more about the purpose of the Bill of Rights here.

The Public Trial Clause covers the entire period of the trial and certain pre-trial activities. It is considered to be a right held by the defendant and not by the public, although the First Amendment has been held to give the public and the press a right to observe trials.

There must be freedom of access to a trial by the public, but that doesn't mean that everyone who wants to attend can attend. For example, in a high publicity case, more people may want to attend than the courtroom will hold. The Public Trial Clause has not been violated if everyone cannot attend, because some people have been allowed to observe and this will ensure that the trial will function in a fair and legal manner. The Public Trial Clause has been violated only if the trial is completely held in secret.

Sometimes a case like this will result in a closed trial. If a trial is closed, the court must have very specific concerns about the defendant's right to receive a fair trial that would justify closing the trial. Trials can also be closed for security reasons, as in Mafia cases, or to protect the identity of minors or of rape victims.

You can read about several interesting and significant Sixth Amendment Court Cases dealing with the Public Trial Clause here.