Because the right to a public trial has been agreed to by nearly everyone in America's judicial and political history, the Supreme Court has had few times it has had to deal with a violation of the Public Trial Clause. The cases that have arisen have mostly dealt with circumstances dealing with the reasons an otherwise public trial might be closed, or dealing with access issues.

In Estes vs. Texas, 1965, the Supreme Court found that media presence in a courtroom could affect the defendant's ability to receive a fair trial. The case involved an accused swindler who received national news media attention. The trial was moved to another jurisdiction to try to ensure that potential jurors had not been tainted by media coverage in the home jurisdiction.

When the case was moved, excessive media coverage also occurred in the new jurisdiction. Cameras and reporters were all over the courtroom. The judge eventually placed restrictions on reporters, designating a certain spot in the courtroom where they were confined, and limited the amount of audio and video coverage that they could take.

The defendant claimed in the case that his right to receive a fair trial had been violated by the media coverage. The Court agreed. The case also relates to the Public Trial Clause, in that the press believed its right to attend should be unrestricted due to the fact that trials must be held in public. The Court ruled that media coverage by its nature may taint potential jurors and damage a defendant's ability to receive a fair trial. This, therefore, made reasonable restrictions on media activities in the courtroom necessary.

In this case, the state had conducted judge authorized wiretapping of people suspected of being involved in an illegal lottery operation. Before the trial, the defendants moved to suppress the wiretap evidence in court. In order to consider this, the court had to hold a suppression hearing. The state moved to hold the suppression hearing in private because situations would be revealed in the wiretaps involving people that were not yet indicted, and of some who were indicted, but were not yet on trial. The state claimed that this would cause the evidence to be tainted and unusable in later trials regarding these people.

The court agreed and the suppression hearing lasted for seven days. During that time, wiretaps were played for only 2 1/2 hours and very little of that had anything to do with participants who were not already in the courtroom. Later the defendants were convicted.

The defendants appealed their case up to the Supreme Court on grounds that their right to a public trial, guaranteed by the Public Trial Clause, had been violated by the private suppression hearing. 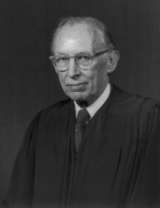 The Court agreed with the claim. In its unanimous verdict, the Court specified four things that must take place in order for an otherwise public trial to be held in private. Justice Lewis Powell, writing the Court's opinion, said:

"Under the Sixth Amendment, any closure of a suppression hearing over the objections of the accused must meet the following tests: the party seeking to close the hearing must advance an overriding interest that is likely to be prejudiced; the closure must be no broader than necessary to protect that interest; the trial court must consider reasonable alternatives to closing the hearing; and it must make findings adequate to support the closure."

Justice Powell said that the court's closure of the entire suppression hearing was completely unjustified. The state did not specify whose privacy interests would be violated if the tapes were made public, what part of the tapes might damage those interests, or what portion of the evidence consisted of the tapes. The state's claim was broad and general. The state also did not attempt to consider alternatives to the hearing. All of these violated the Public Trial Clause.

In Press-Enterprise Co. vs. Superior Court, 1986, a murder suspect moved to have his pre-trial hearing held privately. He claimed that media publicity would damage his right to receive a fair trial and wanted to waive his right to a public trial guaranteed by the Public Trial Clause. The Court granted his request.

After the trial, the Press-Enterprise Co. requested a transcript of the hearing, but this was refused. The company filed suit alleging that it had a First Amendment right to have access to the transcript. Eventually the case was taken up by the Supreme Court.

The Court ruled in favor of Press-Enterprise Co. The Court stated that at times, trials may be closed if having a public trial will damage the defendant's ability to have a fair trial. After the hearing was over though, the possibility of tainting the hearing was over, and giving out a transcript of the completed proceedings would not jeopardize the defendant's right to a fair trial.

The Court said that two considerations must be made before the Public Trial Clause guarantee can be waived. 1) There must be a substantial probability that the defendant cannot get a fair trial without closing the trial and 2) reasonable alternatives to closing the trial must be considered.