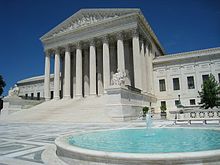 Washington vs. Texas, 1967, was the case the Court used to apply the Compulsory Process Clause to the States. This case also overturned a Texas law that barred defendants from calling witnesses who had been accomplices in the same alleged crime.

The Court ruled that this was a violation of the Compulsory Process Clause's provision that the defendant can call for witnesses to testify in his behalf. The Court's decision said:

"It is difficult to see how the Constitution is any less violated by the arbitrary rules that prevent whole categories of defense witnesses from testifying on the basis of... categories that presume them unworthy of belief."

In Webb vs. Texas, 1972, a trial court judge had given the defendant's only witness a lengthy admonition about not lying to the court, accompanied with very stern warnings about the consequences of doing so. The judge scared the witness so much that he refused to testify at all.

The Court ruled that the judge had violated the defendant's 6th Amendment Compulsory Process Clause right to present his own witnesses in his defense.

In Roviaro vs. United States, 1957, the defendant was charged with and convicted for knowingly possessing and transporting heroin. The government had used an undercover informant in the matter, who was directly involved in bringing about the defendant's possession of the drugs. The informer was there at the time with the defendant when the crime allegedly occurred.

The defense requested the name and address of the informer because it wanted to cross-examine him. The informer may have been able to shed light on the circumstances, especially whether or not the defendant understood that he was carrying drugs. The government refused this request on the grounds that it had the privilege to keep the identity of the informer secret.

The Supreme Court disagreed. The Court said that a formal rule could not be made in circumstances where an undercover informer is involved. Each case must be weighed according to its circumstances. Sometimes it may be justified in keeping the identity of the informer secret. But in this case, the Court said, the overriding interest was the defendant's 6th Amendment Compulsory Process Clause right to produce witnesses in his own defense. The informer was directly involved and probably had important knowledge of the matter that the defense would want to bring out in court.

The Court gave four factors that must be judged when considering whether or not the identity of the informer must be revealed. The ruling said the following:

"The public interest in protecting the flow of information to the Government must be balanced against the individual's right to prepare his defense. Whether nondisclosure is erroneous depends on the particular circumstances of each case, taking into consideration the crime charged, the possible defenses, the possible significance of the informer's testimony, and other relevant factors."

The four factors to be considered are:

The nature of the alleged crime The possible defenses of the accused The possible significance of the informer's testimony Any other relevant factors or circumstances.